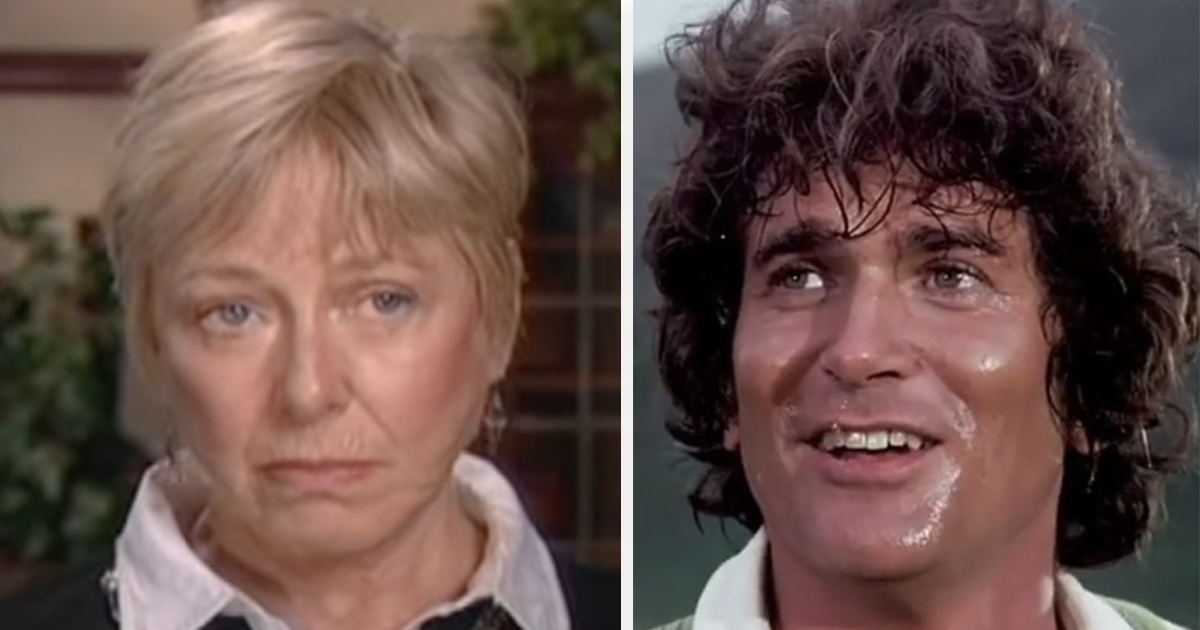 Karen Grassle became a legendary television actress following her appearance as Caroline Ingalls on Little House on the Prairie. The show, as well as its various roles, are still to this day iconic. Not only that, but people all around the world can and do continue to watch the show.

Several actors and actresses have spoken about the wonderful atmosphere on set while filming Little House. By all accounts, Michael Landon was very keen on everyone having a great experience, as well as everyone getting to leave the set and go home on time.

However, Karen Grassle recently spoke out to describe a whole different kind of atmosphere, at least where she and Michael Landon were concerned.

Little House on the Prairie sure is a legendary show, and is still aired in over 100 countries. In actual fact, the show has never been completely off the air since it premiered in 1974.

The historical western drama – about the Ingalls family living on a farm in Plum Creek, near Walnut Grove, Minnesota – helped some of its actors become household names through their appearances.

Michael Landon is the one most people probably think about, but sadly, he passed away in 1991.

Among the other actors, Melissa Gilbert and Karen Grassel both became icons through Little House. For me, it’s hard to choose a favorite among so many great performances.

Karen Grassel’s life changed when she got the part as Caroline Ingalls, AKA “Ma”, on Little House on the Prairie.

Born on February 25, 1942 in California, Grassel completed her college education at the University of California. She then traveled to London to study at the prestigious Royal Academy of Dramatic Arts.

She did plenty of theater work with the Shakespeare company, but unfortunately things didn’t quite add up when it came to her finances.

“I had spent a year in England, working with a Shakespeare company and teaching, and came back to the States flat broke,” she told Closer Weekly.

Yet some of the greatest happenings in life can be coincidences. It just might be that you’re at the right place at the right time to get that shot you desperately need in life. That’s exactly that happened to Karen Grassel.

At the time Little House on the Prairie was doing castings for the show, Grassel actually had another project going on. But as everyone know, she was soon cast in Little House, all thanks to a happy coincidence.

“I was asked to fly to LA to play the lead in an independent movie, but when I got to the airport, there was no ticket!” Grassel recalled.

“I’d sublet my apartment and my boyfriend was [with me], so I wrote a bad check to get one. But when I got to LA, the movie fell through.”

At that point, her agent called her with a proposition. It featured Michael Landon, or as she knew him at the time, “this guy from Bonanza.”

“I was not a big TV watcher,” she added.

The series that she would be auditioning for was, of course, Little House on the Prairie. The drama series was based on the life of the Ingalls family, and took place in the 19th century Midwest. Landon was the lead of the show, and Grassel would audition for the role of Caroline Ingalls.

“I was the only one at the interview,” Grassle told Closer.

“They’d seen everyone in Hollywood who was right for the part. They were down to the wire because they cast everyone else. After I read my second scene with Mike, he leaped up like a jack-in-the-box and said, ‘Bring her to wardrobe!’ But NBC had to approve me, so he interviewed for executives on closed-circuit TV.”

Grassel got the part – and her life changed forever.

Auditioning and coming onto a new show might be a very scary thing. However, Grassel explained that Landon always did his best to try and involve everyone.

“He was constantly trying to make the crew laugh and make everybody happy,” she recalled. “A very hard worker and he could be quite moody — he had a lot on his shoulders that first year. He had a falling-out with a producer very early on, so he was the only captain.”

She quickly got settled in with all the other actors and actresses. She bonded particularly well with the children on set, especially Melisa Gilbert, who starred as Laura Ingalls.

When it came to her own role of Caroline, Karen decided to base her role on her own mother.

“If you read Laura Ingalls Wilder’s books and see photos, Caroline was very tough and sturdy,” she explained. “My mother rode a horse barefoot to school, and as a young woman, she taught in a one-room schoolhouse! So I took her character, strength and wisdom and infused Caroline with that.”

Dispute with Michael Landon on set

Even though Karen and all the people involved with the production enjoyed the hysteria that was Little House, some things behind the scenes weren’t all that perfect.

As Little House started to gain more and more viewers, becoming widely popular in the process, the stars wanted in on the success. At that time – since Karen Grassle was one of the stars on the show – she felt that she deserved more money.

However, her pursuit of a better contract turned into a heated argument with Michael Landon instead.

“Michael was prodigiously talented,” she told Closer. “A complicated character from a dysfunctional family who loved his crew. But when the show was in the top 10 and I said, ‘Gee, it is time to renegotiate my contract,’ Michael did not want to pay me. It was very difficult.”

As one might imagine, not everything on set was peace and good vibes. Karen’s dispute with Landon caused a serious rift in their relationship. In fact, she was afraid to talk to anyone about her not being paid accordingly.

Why? Well, she feared that she might ruin her and Landon’s relationship forever.

“I didn’t speak up publicly at the time,” she said. “Unless the fact that I continued to negotiate meant that Mike might have said things about me that could have been detrimental.”

Had a ‘healing’ phone call

40 years have now passed since Grassle appeared as Caroline Ingalls in Little House. Even though she had her dispute with Landon over her salary, the two started talking again shortly before Landon’s passing in 1991.

“We had a friendly call about the good old days,” Grassle said. “I was glad we had that healing.”

Landon’s widow Cindy also spoke about her late husband’s behavior during the Little House years. She was actually hired as an extra on the show and while working as an extra on the set of the 1976 television movie The Loneliest Runner, she saw Michael for the first time.

“People thought he was extremely serious, but that wasn’t Michael at all,” Cindy told Closer Weekly in 2019. “He was excited about his work, but he always came home happy. He was a fantastic father who was curious about everything and loved to teach the children.”

Landon’s daughter Jennifer added: “He was just the best! That doesn’t mean we had free rein. There was a tremendous amount of respect and discipline that was implemented in our house — but my dad always made things so fun, too.”

“He had this ability to make you feel like something magical could happen or that you were on the edge of a discovery.”

No matter how long they spent on Little House, many of the actors and actresses involved with the filming of the show have stated that it was a truly wonderful experience.

Michael Landon was said to have the ability to make everyone feel welcome, no matter how big or small of a role they had. This started as early as the auditions, which Dean Butler got to experience.

When Butler went down a third time to audition for the role of Almanzo Wilder on Little House, he did so with the intention of reading for director Michael himself.

“I remember reading for Michael and he watched me read, put his hand up like this [like watching through a binocular] and he looked at me through his hands,” Butler recalled. “It was a thrill to see that, what of a terrific director he was, what a star he was. He walked in the room with the boots, the jeans, the whole thing.”

Dean Butler made a great impression on Landon. As we all know, it wasn’t long before he got the job.

“At the end of the reading, he said, ‘what are you doing in May?’,” Butler explained.

“As Michael presented it, Little House was told through the eyes of a young girl, the books as well as the series,” Butler explained.

“There was something idyllic about it, simple and beautiful. Little House made life beautiful and warm, it was sweet and touching. It had a dream quality that the audience responded beautifully to.”

Just days following his college graduation, Dean made his way to the set for Little House. As with any job, the first day can always be somewhat difficult and daunting. But having Michael Landon nearby definitely made everything easier.

In Butler’s first scene, he was supposed to drive a horse wagon 200-yards down a hill. He had never done it before, and when Michael screamed “action”, things didn’t really work out.

The breeze picked up his hat, causing Butler to instinctually drop the reins and reach for it. At the same time, the horses, no longer under control, flew off the road and charged towards an oak tree.

People in the production were screaming, but luckily, a crew member managed to reach the horses before they hit the tree.

“Michael came up to me, chewing on a cigarette, and said ’well, I think I have to double, you know’,” Butler recalled Landon saying. “‘I can double you but not replace the horses on the show’. That was my first taste of being with Michael, but it was great fun.”

Landon was a real family man – as his son has revealed – and made sure that the crew would be home having dinner with their families each night. I think that’s the way a really great job, no matter if its showbiz or not, should always work.

We will always thank Michael Landon, Karen Grassle, Dean Butler and the rest of the crew for their amazing performances on the show!

Which one is your favorite Little House on the Prairie character? Please, write about your memories from the show in the comment section.

Meanwhile, share this article with friends and family to honor Michael Landon and the rest of the Little House crew!