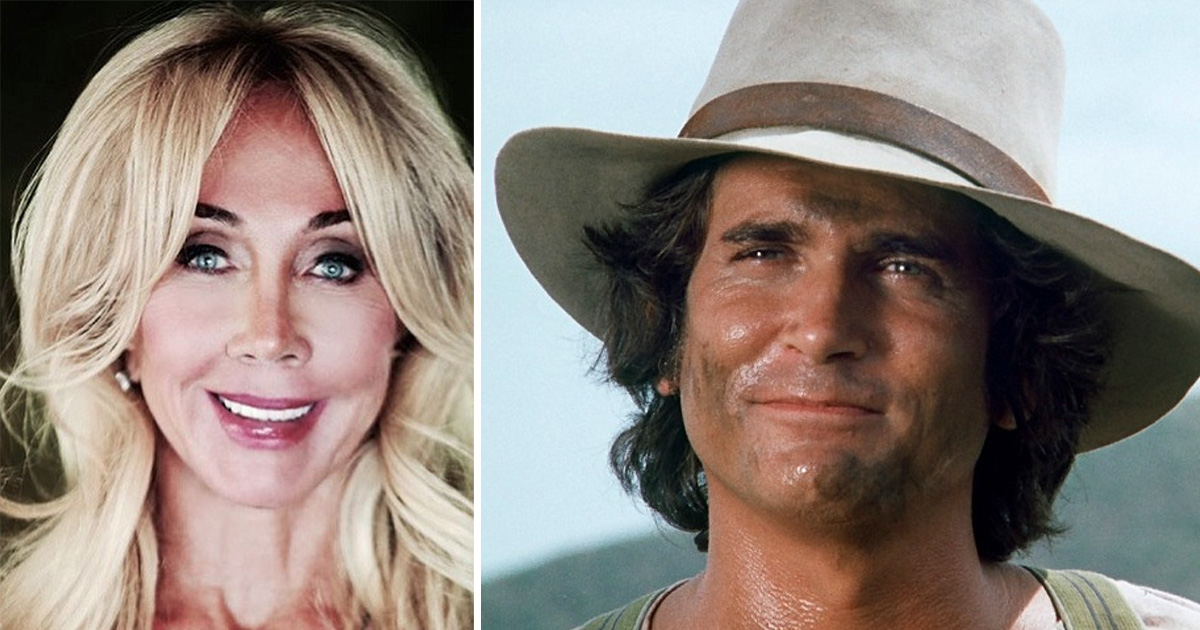 Michael Landon is considered to be one of the most legendary actors on television in Hollywood. He rose to fame thanks to his iconic character in Bonanza and Little House on the Praire, but passed away in 1991 age 54 with his wife Cindy Landon by his side.

But who was Cindy Landon? And what did she do following the passing of her husband?

Michael Landon’s portrayal of Charles Ingalls on Little House on the Praire is one of the most legendary characters in American TV history. The series, based on American children’s novels written by Laura Ingalls Wilder, became a huge success.

And Michael Landon became, just as his character, a legend.

Michael Landon quickly rose to fame in Hollywood, but foremost, it was a meeting at a gas station that changed his life.

While working as a gas station near the Warner Bros Studios in Los Angeles, he caught the attention of talent agent Bob Raison. He suggested that the up-and-coming actor changed his name to something. thatwould fit the entertainment business better. It resulted in Eugene Orowitz changing his name to Michael Landon.

In 1956, he landed his first official role in an episode on the TV series Telephone Time. He also starred as Tom Dooley in the western The Legend of Tom Dooley, which ultimately led to the role of a lifetime, starring as Little Jose Cartwright on the iconic western show Bonanza.

The loving American dad role ended up being one of the most longest-running characters he played in his life, acting as Little Jose Cartwright for 14 years before the show was cancelled in 1973.

The legendary actor moved on to star in the legendary Little House on the Praire, which ended up being his second-longest-running role ever.

Hailed by critics and the American people for his performance as Charles Ingalls. Landon was nominated for several prizes, foremost a Golden Globe in 1979 for Best actor in a television drama series. The show won a total of 4 Emmys and additionally 16 nominations

Little House on the Praire

Following eight successful seasons, the show moved on to a spinoff called Little House: A New Beginning (1982) in which Landon didn’t star. Even though he stepped of the popular show as an actor, he stayed on as a producer and director.

Later he moved on to star as Jonathan Smith in Highway to Heaven, which also gave him legendary status.

In 1984 Michael Landon was honored with at star on the Hollywood Walk of Fame. He also won the Bronze Wrangler Award, also known as the Western Heritage Awards, which honor artistic contributions in television, music, film, and literature.

Landon was married three times, fathering a total of nine children. He wed his first wife Dodie Levy Fraser with the couple having two children together. He got married to his second wife Lynn Noe in 1963 and had four children.

19 years later, when the couple divorced, he met the love of his life in Cindy Landon whom he married a year later. They walked down the aisle on Feb. 4, 1983, but their loving relationship and marriage tragically ended in 1991.

Michael Landon was diagnosed with pancreatic cancer in 1991. He passed away just three months later at the age of 54. At the time of the diagnosis, Landon was about to star in another series called Us.

In an interview with People, his family spoke about his last days. Wife Cindy said that after Michael Landon shared the news about his cancer, everyone was devastated.

“I could feel every nerve in my body,” Chris, one of his sons with Cheryl Lynn, said. “Like it was all lit up.”

However, in just a month, the tumor on his pancreas had doubled in size. The doctors shortly afterwards said that the cancer had spread to his liver.

I was the father, and he was the son, I had to help him up the stairs. I am sad sometimes…when I think that I never said. ‘Sorry.’ I never looked at him and told him that I was sorry he was losing his life,” Chris recalled in an interview with People in 1992.

The last month of his life, wife Cindy and Michael had to start preparing their children for what was to come.

They started reading a book called Butterflies and Michael explained that his body would be like a cocoon with his spirit being a butterfly looking down on them.

Wife Cindy by his side

At the end of June, a nurse visiting their house said he had only a day to life. Cindy called the children, who rushed to the ranch. The had to make their goodbyes to a beloved father and husband.

In the early afternoon on July 1st 1991, Michael Landon passed away with Cindy by his side.

His last words were: ‘I love you.’

“I think it was watching him go through the whole process that prepared her”, Leslie Landon, daughter of Lynn Noe said in an interview with People.

Widow Cindy Landon, now 63, made sure his husbands legacy lived on. But who was she?

Cindy Landon, born Clerico, was born Jan. 27, 1957 in Los Angeles California. At first, she lived in Utah but shortly afterwards moved back to Los Angeles with her mother.

Cindy moved on to work in movies in her 20’s, which led her to the love of her life.

He was the directer of the movie, and Cindy straight away knew that he was special. She knew who Michael was since she watched Bonanza already as a young girl.

”I looked at this man and I just thought he was the most extraordinary man I had ever seen,” she recalled in an 1998 interview. ”It was not just his look, but there was something about his personality, about how he carried himself. There was a charisma about him and a strength that was just incredible.”

She would go on to work on the Little House series for three years, before the two became a couple.

Michael and Cindy had two children. She gave birth to Jennifer Rachel Landon in 1983. with their son Matthew being born three years later.

“People thought he was extremely serious, but that wasn’t Michael at all,” Cindy told Closer Weekly in 2019. “He was excited about his work, but he always came home happy. He was a fantastic father who was curious about everything and loved to teach the children,”

Michael and Cindy’s first daughter Jennifer would follow in her fathers footsteps. Only five years of age, she starred on Highway to Heaven and went on to study drama at New York University.

Jennifer went into the business straight away, working at a talent manager. later she would have great roles in series As The World Turns, Animal Kingdom and Yellowstone.

Speaking with Closer Weekly, Jennifer Landon spoke about her father Michael. Even though she’ve seen him in many legendary roles, the best one he had was being a father.

“He was just the best! That doesn’t mean we had free rein. There was a tremendous amount of respect and discipline that was implemented in our house — but my dad always made things so fun, too,” Jennifer said.

“He had this ability to make you feel like something magical could happen or that you were on the edge of a discovery,”

Michael Landon had a successful acting career that spanned over more than 30 years, His passing in 1991 was of course heartbreaking for his family, but Cindy was committed to make sure his legacy lived on.

After her husband passed away, Cindy felt that the media scrutiny was unbearable. She left to life in Europe with her children for one year, before moving back to Malibu, California.

Now, Cindy’s the president of the Michael and Cindy Landon Foundation. Also, she has been involved in events for Doctors without Borders, Free Arts for Abused Children and an advocate for the Pancreatic Cancer Action Network.

Cindy’s been fighting for animal rights since young age. At the age of 14, she saw a movie about slaughterhouses and decided to become a vegetarian. About 15 years ago, she also gave up eating dairy products.

For decades, she’s been involved in philanthropic efforts and in her house in Malibu, California, the love for animals lives on.

In an interview with The Malibu Times in 2017, she revealed that she had eight dogs which are mostly rescued, together with a 250-pound Mexican hairless pig, Rosie, who was rescue from a lab in Utah.

Rosie is said to be very well mannered, according to Cindy. She sleeps in stables at night but from time to time are welcomed into the house.

In 2017, she was also awarded the “Philanthropist of the Year” award, given by the nonprofit animal protection group Last Chance for Animals (LCA).

“My life is very busy, and it’s always been that way,” Cindy Landon told the Malibu Times. “I like being active and involved, but I also want time to do the things I love and enjoy in life, like travel and see my family.”

Over time, she’s been getting more and more personally involved with the different causes she believe in.

In 2016, she was the director and executive producer of the documentary Sanctuary, which is about chimpanzees being taken from their mothers. It tells the story of the humans that are doing everything they can to save the lives of abused, unwanted and abandoned animals, to give them a second chance to a good and healthy life.

Together with James Cameron as the executive producer, Cindy also worked on the documentary The Game Changers in 2018. It follows a former mixed martial artist travelling the world, interviewing succesful athletes that are living a vegan lifestyle.

“The documentary basically shows that we don’t need to eat meat to be strong,” Landon told the Malibu Times. “You don’t do a documentary thinking you’re going to make money. For me, it’s all about creating awareness.

Michael Landon was a loving man and husband, always helping people and giving money to charity. Cindy’s been living the same life following her husbands passing, and through Instagram, she’ve shared some beautiful glimpses of their live together.

In February, Cindy walked down memory lane, posting a photo the two together with their children Jennifer and Sean.

“Wow I took this photo many years ago.. I found it going through my storage .. it ended up in a coffee table book”, she wrote.

On July 1st, Cindy posted an emotional tribute to her late husband, 19 years on the day after he passed.

July 1 we said goodbye to you. You left us way to soon. You will always and forever be in our hearts. Memories last a lifetime“, she wrote together with a picture of the entire family.

Even though time goes by, it’s hard not to get emotional while thinking about loved ones that’s passed many years ago.

But nonetheless, we’re sure that Cindy still remembers him as a wonderful man and husband, just as we see their marriage as true love!

Please, share this story with friends and family to honor Michael Landon.