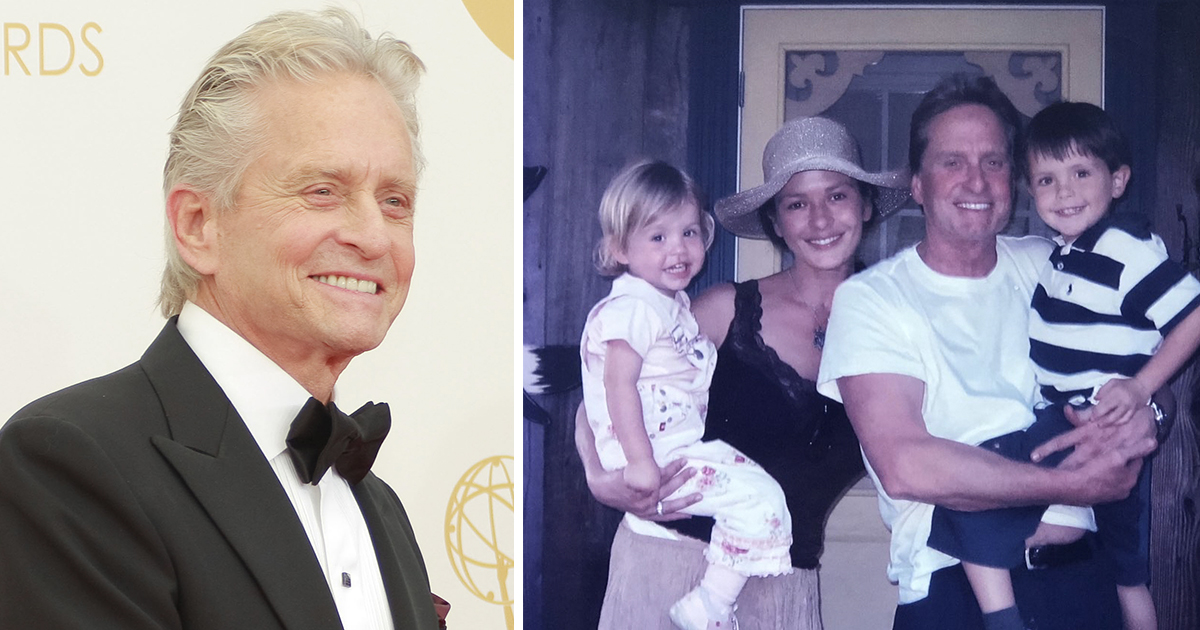 Michael Douglas and Catherine Zeta-Jones have been through plenty. Together, they’ve moved between the US and Bermuda with their children Dylan Douglas and Carys Zeta-Douglas, and experienced a lot of change.

These days, Dylan is an adult. At 20, he’s now chosen his own path in life. Being the son of a major Hollywood star – and grandchild to another icon, Kirk Douglas – certainly comes with a deal of pressure.

But his parents made sure that their son had the best childhood possible, even moving away from Bermuda to help him.

Michael Douglas was born on September 25, 1944 in New Brunswick, New Jersey to parents Diana and Kirk Douglas, both whom were actors.

At six years old, Douglas’s parents divorced and he went on to live with his mother. He only saw his father during holidays.

Michael Douglas attended the Eaglebrook School in Deerfield, Massachusetts, and later on the Choate School, an elite preparatory school.

Douglas got a feel for the acting business at an early age. He used to spend summers together with his father, Kirk, who was more often that not shooting films. Douglas hung out with his father on movie sets, and in his teens, he knew he wanted to be an actor, asking his father to find him some roles.

However, Kirk didn’t think the acting industry would be a good fit for Michael, since it was one of huge pressure and a constant carousel of ups and downs. He didn’t want either of his sons to enter show business, but in the end, he couldn’t stop Michael.

Michael chose to turn down studying at Yale University, instead moving to California.

“I grew up on the East Coast and was going to go to an Ivy League School, but at the last minute I decided to be a hippy,” he explained. “It was the protest movements on the war, peace movements were going on at our university. It was a fantastic time.”

While studying at University of California Santa Barbara, he continued to ask his father Kirk for a “foot in the door” to the movie industry. In 1966, he landed his first role.

Michael Douglas made his debut in Cast a Giant Shadow – in which his father also starred – where he played the role of an uncredited driver.

“I was fortunate to grow up and watch how my father behaved – how Tony Curtis, Burt Lancaster, and Frank Sinatra were at the house all the time,” Michael Douglas said on The Talk. “You see stars with their insecurities and how they conduct themselves, so I think that’s kept me level.”

Michael Douglas graduated with a bachelors degree in 1968 and decided to move back to the east coast. This time he ended up in New York City, where he continued his pursuit of a career in the film industry.

Douglas studied at the American Place Theatre and later at the Neighborhood Playhouse. He got some leading roles and spent time in between performing in off-Broadway productions.

Before his first role in a film, Michael Douglas had a brief part in the television show The F.B.I. Producer Quinn Martin was impressed, and Douglas then got a part in the new police series The Streets of San Francisco. The show premiered in 1972, and would turn out to be Douglas’s big breakthrough role.

The show became one of ABC’s highest-rated programs in the mid 1970s, airing on prime-time, and Michael Douglas received three straight Emmy Award Nominations for his performance. He also directed two episodes of the series, giving him experience in a field he later would return to.

In 1975, Michael produced the classic One Flew Over the Cuckoo’s Nest, a movie that put him among some of the greatest. The film earned several Academy Awards, and Douglas himself won an Academy Award for Best Picture.

By now Douglas was a great producer and director, and everyone wanted to work with him. He produced as well as starred in The China Syndrome (1979) alongside Jane Fonda. The movie earned more Academy Award nominations and was named one of the best films of the year by the National Board of Review.

Michael Douglas would go on to become a major Hollywood star following his performances as Gordon Gecko in Wall Street (1987), Falling Down (1993), and The Game (1997).

This was also the time when he’d meet his love, Catherine Zeta-Jones. But even before they met, he liked her.

“I’m watching this movie, and I go, ‘Wow, who is this girl? She’s incredible,’” Douglas recalled. He was watching a screening of her upcoming movie The Mask of Zorro at the time.

The two Hollywood celebrities then met in 1996 at the Deauville Film Festival.

“I had been told Michael Douglas wanted to meet me,” Zeta-Jones recalled in a 2001 television interview with Larry King. “I was a little nervous because I didn’t quite know what he wanted to meet me about.”

Michael Douglas knew that he’d just met the love of his life.

However, he thought he had ruined any chance of them moving forward together during their first encounter.

“I said to her after about half an hour, ‘You know, I’m going to be the father of your children,'” Douglas recalled on The Jonathan Ross Show, as quoted by E! News. “It sounded good, and she said, ‘You know, I’ve heard a lot about you and I’ve seen a lot about you, and I think it’s time I say goodnight.'”

Douglas and Zeta-Jones continued speaking on the phone for about nine months, and continued sharing dinners. Then the pair came to wonder why they weren’t together, and so they sat down and talked about it.

At this point, their romance grew. Douglas and Zeta-Jones have a 25-year age difference, which meant that their relationship was all over the tabloids before long. But they didn’t care; their romance was too great. On New Years Eve in 1999, Michael Douglas proposed to Catherine at his home in Aspen, Colorado. And it sure was special.

“Both of us were sick as dogs because we had [the] flu,” Douglas recalled in 2016. Later the same year, they got married.

“I don’t take any of this for granted,” Zeta-Jones told People during their wedding. “When I look at Michael, I run around like a little girl. I can’t believe I came into his life and he came into mine.”

Only months following their engagement, there were rumors that the pair were expecting a child.

In August of 2000, Dylan Douglas was born. He was the first child of Catherine Zeta-Jones, and the second child for Douglas. His firstborn son Cameron had been born in 1978 to his then-wife Diandra Luker.

Catherine Zeta-Jones and Michael Douglas welcomed their second child – daughter Carys Zeta-Douglas – in 2003. Like with any marriage, theirs has had its ups and downs, but in the end, their love conquers everything.

Now, their children are all grown up, and it turns out that Dylan Douglas chose a completely different career to that of his parents.

He seems to be a real daredevil.

Dylan Douglas is now 20 years of age, and he’s had the opportunity to live in several places already.

As a small child, Dylan and his family lived in Bermuda. Michael Douglas has deep roots with the group of islands, since his mother hails from there. He also spent many of his teenage summers there.

In 2001, when Dylan was only a one-year-old, parents Michael and Catherine decided that the family should move to Bermuda. Being two major celebrities at the time, they decided that it would be better for the children to grow up far away from the spotlight, which many times has turned out to be poisonous.

Douglas and Zeta-Jones, who lived in New York City at the time, wanted their children to have a safe and calm upbringing without paparazzi.

In Bermuda, they felt that people respected their privacy.

“Bermuda creates an environment for us away from the entertainment business, and gives our kids independence and freedom where showbiz isn’t on everybody’s lips,” Douglas said, as quoted by the Bermuda Sun. “It’s a lovely, lovely place.”

However, the family only stayed on the island for eight years, as Dylan was diagnosed with dyslexia.

He didn’t start reading until the age of five, and parents Michael Douglas and Catherine Zeta-Jones decided it was best for him to attend a special school in New York. As a result, the Douglas family left Bermuda and Dylan finally got the chance to prove to everyone how great of a kid he was. He enrolled at the Windward School, which specializes in dyslexia.

Those couple of years were very challenging for the Douglas family. Not only was Dylan’s half brother Cameron sentenced to five years in prison, but Michael Douglas found out that he had stage 4 tongue cancer. He underwent chemo and radiation therapy, as Dylan was settling into his new school.

In the end, Michael Douglas successfully came out the other side after his cancer treatment, and Dylan went on to love school. During an emotional speech at a Windward School fundraiser, Dylan honored the school that had helped him overcome his dyslexia, and also opened up about how his father’s cancer had impacted his life.

At school, he felt free, and was able to just be Dylan, not a person with special needs.

“At home, I was alone, but at school I was far from lonely,” he said in his speech, which his mother Catherine Zeta-Jones shared on her Instagram page. “At Winward I was free. It was like the Mecca of dyslexics.”

“In 2010 everything was normal again at home, I could finally see my mum again and my dad was cancer free,” he added. “Everything was beautiful again.”

Speaking to The Guardian in 2010, Michael Douglas opened up about raising his children regardless of they need special education or not.

“Neither of us is overwhelmed with worry about which school or college they are going to be going to,” said Douglas. “We just want them to be good citizens of the planet. They’re not spoiled or obnoxious. They’re well-mannered, confident, pretty worldly. My son deals with dyslexia to a degree – it runs in the family and my brother has it. He goes to a special school. We’re old-fashioned parents, they’ve got British nannies and we get nice compliments from people. Our children make us proud.”

Now, Dylan Douglas is all grown up. According to his Instagram page, he works as a Political & Outreach Director, at “Make Room Now”, which he also is the co-founder of. He has a great interest in history, especially decolonization, freedom movements and first-time voting activism.

At the same time, it seems like he is a real daredevil who loves a great adrenaline rush.

Dylan can be seen skydiving or engaging in other similar activities, something that doesn’t really keep his father Michael at ease.

“He just did a skydiving thing,” Douglas told Ellen DeGeneres. “But I remember that age. It’s a hormonal thing, I think, for boys, testing yourself. I just think it — you know, what I did not like is he was the first one to jump.

On Father’s Day, earlier this year, Dylan posted a beautiful tribute to his dad on Instagram, alongside a picture of him and Michael Douglas.

“Dad, Happy Father’s Day! I find it hard to put into words how much you mean to me, how thankful I am for all you do for me and how much I love you!” Dylan wrote.

Dylan Douglas seems to be a real down-to-earth person, just like his parents are. And doesn’t he really look like his “old man”?!

Following several tough struggles within the family, we really hope that the Douglas clan will stay together, sharing the love between them.