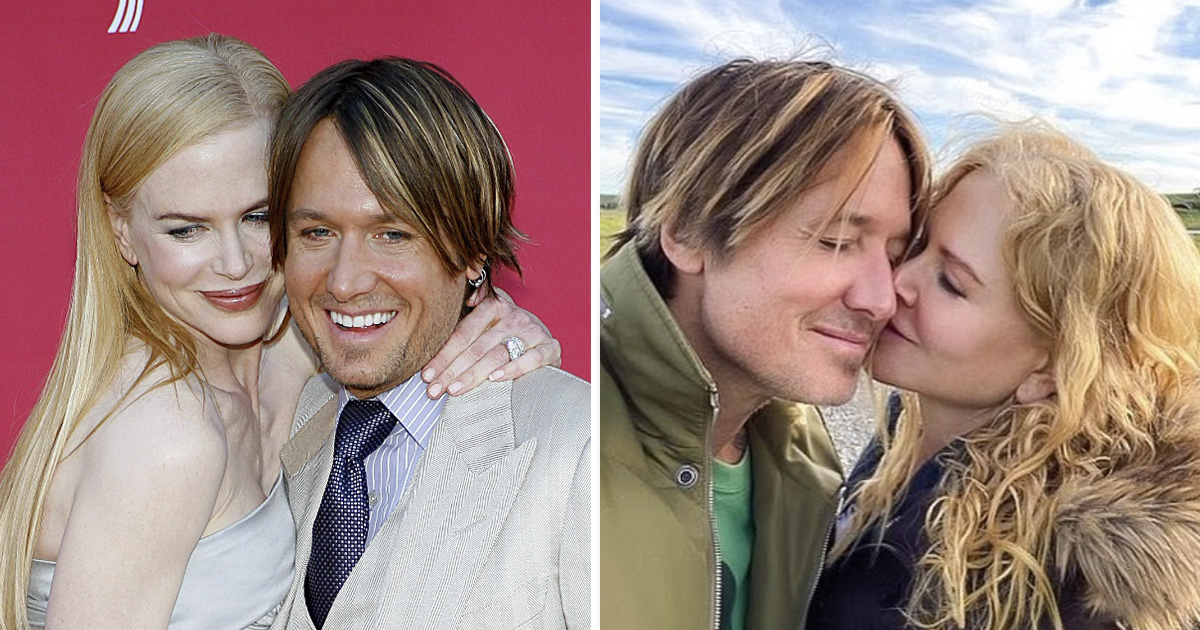 Keith Urban and Nicole Kidman have been married since 2006. The couple’s love story has endured its ups and downs, but in the end, they have shown that things really can work out.

Fans can follow the lives of their family and kids through social media, and recently a specific picture drew a lot of attention.

Kidman posted a picture of her beloved husband on Instagram – but many fans questioned whether all was as it seemed. Was it actually him in the image?

Though plenty of talk focuses on the negative side, where the romances or marriages of Hollywood don’t work out in the long run, there are also plenty that survive the chaos.

One such relationship is that of Nicole Kidman and Keith Urban. Both of them had experienced their fair share of romance before meeting, but today they celebrate their 14-year marriage anniversary.

Like any other couple, Nicole and Keith have had their fair share of problems. However, their love has prevailed, and we adore seeing the two together.

So how did they meet? Was it love at first sight? Here’s all you need to know about Nicole Kidman and Keith Urban’s love story!

Before the power couple met, Nicole and Keith had plenty of other well-documented relationships. In Nicole’s case, that included a rather serious one.

The actress married Tom Cruise in 1990, and together they had children Isabella and Connor. They would eventually divorce 11 years later.

Keith Urban, however, had never been married until he met the love of his life in Nicole. It turns out, he has a very interesting reason as to why he didn’t have many adult relationships before.

Speaking to Variety, the singer said that he was pretty much raised in a home where communication wasn’t encouraged. This hindered many of his adult relationships in later life.

“It took marrying Nic to learn all about that, learn about how to really communicate properly and speak and say things,” Keith Urban said.

“I could write a good love song, but I was terrible at relationships, because I didn’t really know.

“Im glad that our girls are in a very different environment where we talk about things all the time.”

Nicole Kidman and Keith Urban would go on to have two children of their own, but we’ll get to that in a moment. For now, let’s focus on how the two lovebirds met.

In 2005, both Nicole and Keith attended the G’Day USA [an Australian organization] gala. As they look back at it, it would seem like they really don’t know what actually happened between them.

Speaking with Ellen DeGeneres in 2017, Kidman recalls Urban not being that fond of her, romantically.

“I remember thinking, I had such a crush on him, and he wasn’t interested in me,” Kidman told Ellen. “It’s true! He didn’t call me for four months.”

And yes, that was true; Urban didn’t make a move at all at first. However, that didn’t have anything to do with him not being interested. In fact, Keith Urban felt that he lacked confidence.

“Somebody had given me her number and I had it in my pocket for a while. I kept looking at it thinking, ‘If I call this number, she’s going to answer. I don’t know what to say’,” he said on the talk show Interview.

Keith decided to give Nicole a call – and it didn’t take long before the couple had fallen in love. But even though they started dating, Urban still didn’t have the confidence to believe that he actually had a shot.

“I’m a kid from Brisbane, and went to Nashville,” he explained. “It’s always what I wanted to do. And somewhere along the way I end up meeting Nicole. I might have a wild imagination about the possibilities in life, obviously, but not in a million years did I think that some girl like that would be interested in me. At all.”

Nicole and Keith started dating – and romantic sparks were flying from the start. Even so, both decided to keep the entire thing low-key.

“We were very, very quiet about it, and we managed to get through a long period of time without people knowing about us—which is pretty much our style still,” Kidman told Vanity Fair.

It didn’t take long, though, before Nicole knew that he wanted to marry him – only six months, actually.

Surprised her with Woodstock trip

How come? Well, On the morning of her 38th birthday, Keith surprised her outside of her home. He had brought flowers and whiskey – and surprised her with a trip to Woodstock, New York.

“That is when I went, ‘This is the man I hope I get to marry,” Nicole told People.

“It was pretty intense,” she added. “I believed by that point he was the love of my life. Maybe that’s because I am deeply romantic, or I’m an actress, or I have strong faith as well, but I just believed, ‘Oh, okay, here he is.'”

On June 25, 2006, Keith Urban and Nicole Kidman got married at a beautiful church in the Sydney suburb of Manly, Australia. More than 200 guests attended the wedding, including Naomi Watts, Russel Crowe and Huge Jackman.

In an 2015 interview, Kidman admitted they didn’t really know each other when they got married.

“There was an enormous attraction initially and we got engaged after three months and then we got married really quickly, but we didn’t really know each other,” the 53-year-old actress said, as quoted by Metro. “We really only got to know each other after we were married.”

“I think meeting at a certain age makes a difference,” she added. “And I trust my gut instinct. From the first minute I met him, there was a feeling of, ‘Ahhh OK, somehow I’ve met home’. And he had the same feeling. That was all we had but that was the essence of what we worked from.”

‘A miracle the marriage survived’

At this point, the couple were happily married. But it didn’t take long until things changed, as Keith Urban had several problems with drugs.

Kidman arranged an intervention for Keith in 2006, and in October the same year, he decided to get help. For three of his first 12 months as a husband, he stayed inside an in-patient-facility.

“I caused the implosion of my fresh marriage,” Urban told Rolling Stone. “It survived, but it’s a miracle it did. I was spiritually awoken with her. I use the expression ‘I was born into her,’ and that’s how I feel. And for the first time in my life, I could shake off the shackles of addiction.”

Keith Urban and Nicole Kidman got through the very rough time together, and showed the world that love can take us through any struggle.

A year after the intervention, Kidman spoke with Vanity Fair, reflecting back on their paths crossing.

“I would probably say that two very lonely people managed to meet at a time when they could open themselves to each other. We were a mixture of frightened and brave,” she said.

Nicole and Keith are probably two of the biggest “exports” from Australia to the US, having reached astronomical levels of stardom through their music and acting.

Just two years after they married, the couple welcomed their first child, Sunday Rose. She was named after Australian art patron Sunday Reed and Urban’s grandmother Rose, according to People.

Then, Keith and Nicole welcomed their second daughter, Faith Margaret, in December of 2010.

Safe to say that Keith and Nicole are really proud parents, as anyone would be. On Mother’s Day last year, Urban shared a touching piece of writing about his wife’s wonderful parenting skills.

“She’s an extraordinary mum, she really, really is,” he said. “Those girls are very, very lucky, and I feel very lucky that the children I should have in this world happen to be with Nic.

“I don’t know anything about raising kids and Nic does, and that comes in extremely, um, it’s really made for an experience I wouldn’t have had without that.”

Keith Urban added: “Her patience, her recognizing them as people and not just little kids is really extraordinary. Her attention to honoring their feelings and listening to them right from day one – really being attentive to that is not how I was raised at all, so it’s really beautiful to see.”

Their two daughters, Sunday Rose and Faith Margaret, are now growing up inside of a loving home. And in fact, they are following in their famous parents’ footsteps.

Before the couple welcomed their first daughter, Kidman actually experienced fertility issues. In 2015, she opened up about her wish to have an even bigger family.

Urban and Kidman’s love story is truly wonderful. Even though fame has its boundaries as to where you can go without being recognized, they have, as a family, gone through many tough times.

Kidman said that their family priest told them their marriage was ‘always kiss hello and kiss goodbye’, which very much sums it up.

On Instagram, their fans can follow the love story of Urban and Kidman, and it really is something else.

But just a couple of days ago, Nicole posted a very unexpected picture of her husband, which had many fans wondering.

The picture was of Keith Urban, but as a very young kid. The now world-wide known singer wore a vest and flip-flops while playing his guitar. His blonde long hair and crooked set of teeth are incredibly charming, and it’s safe to say Nicole Kidman loved it as well.

“One of my favorite #FBF’s [Throwback Fridays] ever,” Kidman wrote in the caption. And it turns out, she wasn’t the only one dazzled by the picture.

Followers wrote many wonderful things in the comment section, praising Keith Urban’s cool looks as a kid. However, some people were pretty confused. Was it actually Keith in the picture?

Some of their followers thought it was their daughter, Sunday Rose. And others were actually convinced that it was Nicole herself in the picture!

“Thought that was you,” one fan commented.

“Is that not you?” another asked.

Even though some thought it was Nicole – or the couple’s daughter – we can confirm that Keith Urban was a really cute kid. Moreover, we can only imagine all the new, lovely pictures, they will post of each other in the future.

Keith Urban and Nicole Kidman are so in love, it’s easy to see. We wish them all the best in the future, and hopefully we get to see them on stage and screen soon again.