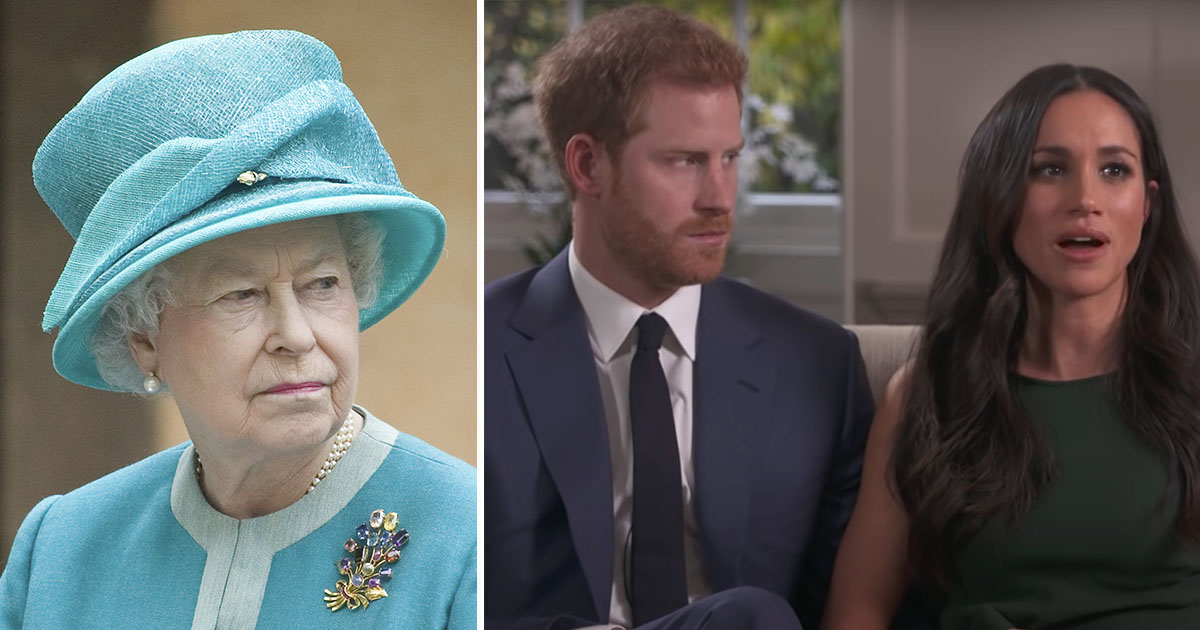 Prince Harry and Meghan Markle have finally moved on from royal life. Now, the couple have two lovely children, and are embarking on new careers.

A byproduct of their shift into a different sort of life entirely, means Harry and Meghan can no longer carry out royal engagements and have lost their royal patronages. Further still, they can’t use “royal” in their own branding, however are permitted to use their Duke and Duchess of Sussex titles.

Many royal fans have criticized the fact that Harry and Meghan are still earning money from the monarchy at the same time as criticizing it. Just why isn’t the Queen doing anything to stop that, one might wonder?

Well, according to royal expert Ingrid Seward, Queen Elizabeth has a plan, and it could be end up hurting Harry and Meghan in the long run.

Ever since they left the Royal Family in 2019, there’s been a whole lot of focus on Prince Harry and Meghan Markle.

The couple decided they wanted a whole different life from one offered in Buckingham Palace, and so relocated to the U.S.

Now, the family of four is living a calm life in Montecito, California. But even though Harry and Meghan have now settled and are parents to two lovely children, things have still been turbulent over the past year.

Harry and Meghan – life in the US

It all started with the shocking Oprah Winfrey interview, in which Harry and Meghan openly made claims of racism within The Firm. Meghan Markle also spoke out about her mental health during this time, accusing Buckingham Palace of not doing anything to help her.

“I share this because there’s so many people who are afraid to voice that they need help,” Meghan Markle said.

It certainly seems as though time away from the Royal Family has been great for Meghan. These days, the couple are focusing on one of the most important things in life: family.

Harry and Meghan left the UK when their son, Archie, was very young. Now, the little boy has the great privilege of being a big brother.

“She weighed 7 lbs 11 oz. Both mother and child are healthy and well, and settling in at home,” a spokesperson for the couple said at the time.

The spokesperson added: “The Duke and Duchess thank you for your warm wishes and prayers as they enjoy this special time as a family.”

Even though their relationship with the Royal Family isn’t at its best, The Firm took the time to congratulate the proud parents of two.

“Congratulations to The Duke and Duchess of Sussex on the birth of Lilibet Diana!” a message on the Royal Family’s official Twitter account read.

“The Queen, The Prince of Wales and The Duchess of Cornwall and The Duke and Duchess of Cambridge are delighted with the news. Lilibet is Her Majesty’s 11th great-grandchild.”

Honoring the Queen and Diana

Lilibet is actually a reference to Queen Elizabeth, whom was called “Lilibet” as a toddler. In fact, it was first used by then Princess Elizabeth, because she couldn’t pronounce her name correctly.

The Queen’s grandfather, King George V, used to call her “Lilibet”. Since then, the name has stuck, as reported by The Guardian. She was called Lilibet by the innermost circle of family.

Even though Harry and Meghan’s newborn daughter is named Lilibet, she will be known as “Lili”.

To honor both the Queen and Princess Diana by naming their daughter after them seems like a very nice thing to do. However, things go deeper than they first appear, if certain rumours are to be believed.

In fact, Harry and Meghan are already facing heavy criticism over the names they chose for their beloved daughter. One critic, royal commentator Richard Kay, wrote in a column for the Daily Mail that Meghan and Harry might have taken things too far by naming their daughter Lilibet.

“By giving the baby the name Lilibet, the Queen’s private family nickname – even though they intend to use the diminutive ‘Lili’ for their daughter – there is a risk,” Kay wrote, as quoted by Express.

Queen said to be ‘desperately unhappy’

“Will it be seen as a presumptuous choice for a royal baby who is eighth in line to the throne, but who will grow up on the other side of the world speaking with an American accent?”

Kay added: “And how might Prince Charles feel about his fifth grandchild carrying such an intimate family pet name that he has never used himself? It is tempting to wonder if Harry would have been so emboldened in his choice if his grandfather Prince Philip – the only close family member permitted to call the Queen ‘Lilibet’ – had still been alive.”

“Doubtless, there will be among the more cautious courtiers at the Palace some discomfort and the odd raised eyebrow at this latest convention-destroying Exocet from the Duke and Duchess of Sussex.”

So what did the Queen think of Harry and Meghan’s decision to name their daughter Lilibet? Well, according to royal biographer Angela Levin, she isn’t especially impressed. In fact, Levin claims that the Queen wouldn’t have liked it at all. Why? Because it was a private nickname mostly used by her beloved late husband Prince Philip.

Some sources counteract that claim, stating that the Queen was informed and asked about the name beforehand. This, however, has never been confirmed.

“I think she’s desperately unhappy because they were desperately rude about her,” Levin told Good Morning Britain.

“I don’t think it’s a good idea, I think it’s quite rude to her Majesty the Queen. It was a very private nickname from her husband who hasn’t been dead for very long.”

She added: “Prince Charles would never dream of referring to his mother as Lilibet. He’s never used it – it was a special name, especially for the Duke of Edinburgh.”

Harry and Meghan have been very outspoken about their feelings towards their lives as royals. At the same time, they have started their new civilian lives, with the couple even having signed deals with both Netflix and Spotify.

Harry has also announced that he’s writing a literary memoir to be released in late 2022. It is, according to publishing company Penguin Random House, “the definitive account of the experiences, adventures, losses, and life lessons that have helped shape him.” Meghan has also released a children’s book.

Moving forward, both will retain their titles, Duke and Duchess of Sussex, while Harry has kept his “Prince” title as well.

This alone has sparked controversy. Many royal fans believe that Meghan and Harry are just cashing in on the Royal Family’s name, while at the same time criticizing the Firm.

The Queen, meanwhile, stripped Meghan and Harry of their His/Her Royal Highness titles when they cut ties with the monarchy.

Basically, that means that Harry no longer holds his military titles and is no longer the patron of England Rugby. Further, neither Harry nor Meghan can now use “royal” in their own branding. At the same time, they lost their royal patronages.

“The Duke and Duchess of Sussex have confirmed to Her Majesty The Queen that they will not be returning as working members of The Royal Family,” Buckingham Palace said in a statement at the time.

“Following conversations with The Duke, The Queen has written confirming that in stepping away from the work of The Royal Family it is not possible to continue with the responsibilities and duties that come with a life of public service.

“The honorary military appointments and Royal patronages held by The Duke and Duchess will therefore be returned to Her Majesty, before being redistributed among working members of The Royal Family.

“While all are saddened by their decision, The Duke and Duchess remain much loved members of the family.”

Interestingly, Queen Elizabeth could step in and remove their titles of “Duke and Duchess of Cambridge” for good – which some fans want done – if things should take a turn for the worse. According to royal expert Ingrid Seward, though, the Queen might have another plan in mind.

Seward believes that the Queen won’t remove their titles, due to the risk that Harry and Meghan getting more “ammunition to criticize the monarchy”. Instead she will ignore them entirely, Seward claims.

“I don’t think removing the titles would make much difference and it would look very petty,” she told Express. “I also don’t think it is something the Queen would want to do at this stage of her reign.

“It would be far more insulting just to ignore them. Even excluding them from the jubilee next year gives them ammunition to criticize the monarchy.”

What do you think of this? Should Harry and Meghan be stripped of their HRH titles or not? Give us your thoughts in the comment section.