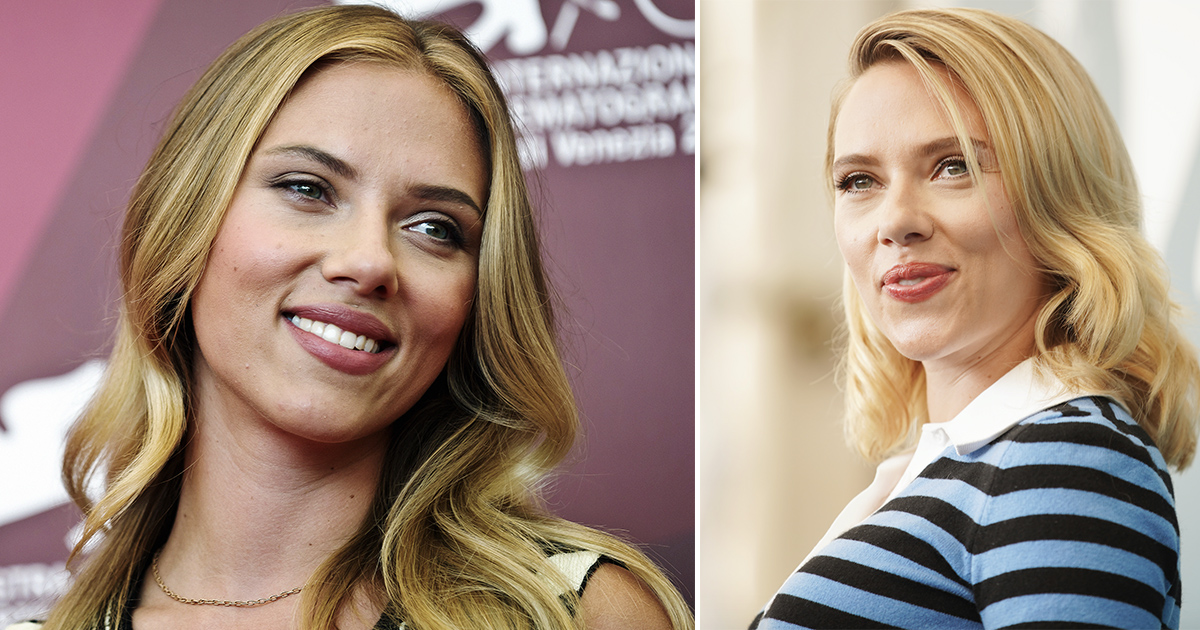 There are many big Hollywood stars who have siblings that we don’t know about. One such celebrity is Scarlett Johansson, who actually has a twin brother, Hunter Johansson.

And, boy, do they look so much like each other!

Now, Hunter’s been out of the spotlight pretty much his entire life – reasonable, since not everyone likes being there. However, he’s doing his own work and supports his sister in the most wonderful way.

Being a celebrity can be tough. Sure, the fame, glamour and money can make seem appealing, but at the same time, it’s entirely consuming; high-profile figures are supposed to always be accessible to their fans in some way, whether that’s through working or making other appearances.

For many celebrities, their biggest wish is simply to to be able to walk down the street, buy some milk at the local grocery store, and then walk back home. Of course, that often isn’t possible due to the millions of people that would recognize them and then want a picture or an autograph.

In short, being the face everyone seems to know is diffcult.

Scarlett Johansson is a huge celebrity and Hollywood star, having appeared in some of the biggest movies along the biggest entertainers on the planet.

Through the years, she’s tried to keep a very private life, and hasn’t been seen in the tabloids really much at all.

There are many things about her life that remain unknown, and we should definitely respect that. Did you know, for example, that she had a twin brother?

Well, she does. Hunter Johansson, however, didn’t chose the same career path as his sister. Instead, he’s devoted his life to the planet, and trying to make it a better place for the next generation.

This is the story of Scarlett and Hunter, two wonderful siblings!

Scarlett and Hunter Johansson were born Nov 22, 1984, in New York City. They grew up in the West Village along with their siblings and parents.

Early on, Scarlett became interested in the world of show business, though Hunter took a whole different path. We’ll get to the more famous twin in a moment, but first, let’s look at the wonderful Scarlett.

She started singing and dancing in early childhood, and it became apparent she had a talent for performance.

“I watched a lot of musicals and films with Judy Garland,” she told ABC in 2014. “I just escaped into them and I wanted to be a musical theatre actor. I was singing then, when I was seven or eight so I sang Bali Ha’i from the Broadway musical South Pacific.”

At 13, she began her acting career after starring in The Horse Whisperer. Soon after that, more jobs would follow. Now the 35-year-old can look back on a wonderful and successful career. Scarlett’s starred in smash-hit movies like like Lost in Translation, Vicky Cristina Barcelona, Hitchcock and of course, blockbuster The Avengers.

Even though her job is demanding and oftentimes requires her to travel, family remains the most important thing, just as it does for her twin brother, Hunter.

Scarlett’s never been a huge tabloid actress, instead wanting to live a quiet life, surrounded by her lovely children, husband and family. In 2014, she gave birth to a daughter, Rose Dorothy Dauriac, whom she shares with Frenchman Romain Dauriac.

“I live a pretty low key lifestyle and I’ve always hold my cards sort of close to my chest when it comes to my private life,” Scarlett explained. “Occasionally, there’s been outbursts here and there.”

As we’ve already said, family has always been important for the Johanssons. Her twin brother Hunter explained once that he and Scarlett always spent time together as children. Today, they are still very close.

”Family is so important to me, it’s my guiding light. We were a really tight unit, it’s just a such important part of my life. People often ask me like ’so what do you do for fun?’. I hang out with my family,” Hunter said on the The Impossible Network podcast.

“We shared everything, and so I think I started my life, literally, from day one having to compromise, having to collaborate, having to listen, having to ignore that I’m not the only one around.

“I had kind of a different perspective and the perspective of my older siblings. I looked up to my older sister Vanessa a lot, she was a guiding force through life where parents didn’t have the most input on.”

Scarlett Johansson was married to actor Ryan Reynolds for two years, with the couple divorcing up in 2011. Following the divorce, Scarlett fell into a depression, but the unwavering support of her brother Hunter and grandmother Dorothy pulled her out of the darkness.

“I’ve got a few very close girlfriends who have been by my side for 15 years now, who I can talk to about everything and confide in,” she explained. “I’ve got a close relationship with my twin brother Hunter as well.”

Sure, Scarlett may steal the spotlight thanks to her celebrity status. But when walking the red carpet, she loves to bring her twin brother Hunter along (he’s nearly a foot taller than his sister).

She even brought him as a date to the White House Correspondent’s Dinner in 2010.

So what does Hunter do instead of acting? Well, he actually starred alongside his sister in the 1996 movie Manny & Lo, but that was pretty much it as far as show business was concerned.

Instead, Hunter is more interested in community work, helping others and doing his part to make the world a better place.

He went to elementary school in the Village, New York City, together with Scarlett. It was a diverse school, with children who had backgrounds of all kinds. More importantly, though, it was an inclusive environment, which Hunter loved. As a child, he wanted to become a brain surgeon, and later on he loved photography and nature. Looking at the big trees in Central Park was an huge inspiration for Hunter, and he was also interested in watching the New York rats and their way of life.

Following his graduation however, it wasn’t environmental work he would engage in. In his late 20s, Hunter Johansson worked as a bartender in Miami. He loved meeting and engaging with people, though at one point – after what he describes as a ”dark period” in his life – he decided to start on a new path.

With the support of his family, and especially his older sister Vanessa, he went to grad school at NYU and got his master’s degree in public administration in late 2019.

“Don’t care who you’re related to”

In the beginning, Stringer wanted to make it clear that he didn’t care about Hunter’s world-famous twin sister.

“There was obviously a little bit of buzz when he started here as an intern before he got hired, but I wanted him to know that I was kind of with it, you know?” Mr. Stringer explained.

“So I said to him, ‘Listen, I just want you to know that you were hired based on real merit, and I don’t care who you’re related to.’ And he said, ‘Well, you probably know my grandmother.'”

His grandmother, Dorothy Sloan, was a bit of an activist herself, fighting for an affordable housing program in New York even before Hunter and Scarlett were born.

But of course, sometimes having a celebrity sister can be an advantage.

“She tells me how girls think,” he once told People. “When I’m stuck, I call. She’s set me up on dates. It wasn’t with anybody famous. It was with some school friends — all very beautiful, wonderful girls.”

Later on, Hunter worked on the presidential campaign and reelection of former President Barack Obama in 2008.

But it would be two different hurricanes that would change his life forever. For many, a hurricane far away in another country might not be something you think about to much. But in 2012, the overwhelming power of nature became a shocking reality for the US, when Hurricane Sandy swept over more than 20 states.

New York City was hit hard, with the hurricane flooding streets, tunnels and subway lines, cutting power. It was a wake-up call for Hunter.

“When Sandy happened, it was seeing devastation first hand,” he explained. “I realized that, ’hey this is a trend, there’s a massive problem here. We’re not ready for this, were not responding correctly. People are loosing lives and they shouldn’t be’.

“When Maria happened [in 2017], I just had to be down there. I couldn’t let my fellow Americans struggle and be in this utter despair. It was this urge to see what was going on there. People were desperate.”

Hurricane Maria swept over Puerto Rico and became one of the single worst natural disasters in modern age.  It turned out that a big problem was that first responders couldn’t help people because of the power being cut.

Hunter couldn’t help all the way from New York, so he started his own organization to ensure he could get stuff done. Solar Responders – an organization that puts solar panels on police and fire stations in order for first responders to save life through renewable energy – was born.

He now works with the organization full-time, installing solar units in hurricane hit regions. Putting up batteries and panels aren’t cheap. The estimated cost to install them on Puerto Rico’s 200 fire and police stations alone is $11.5 million.

In December of 2019 – just weeks following the start of the program – the first fire station had solar panels on its roof.

“Thanks to writer Colin Jost, actress Scarlett Johansson and all of our supporters for your generous donations,” it was stated on the Solar Responders’ website.

“During the first 5 months after Hurricane Maria, firefighters in Rincon relied on a dirty diesel generator and bi-weekly oil deliveries to power their station. Now, when the power-grid fails, reliable and renewable solar power will ensure firefighters can serve the 15,000+ residents, hundreds of businesses and thousands of tourists that support the local economy.”

Scarlett Johansson wanted to help her brother, and so donated money to put up a second set of solar panels when they started the project. For Hunter, the support from his family has been amazing.

“I’m so proud. My family saw this visions, they saw how important this was,” he said.

“If there is a truly altruistic person I know in my life, it’s my brother,” she told People. “He reminds me to be a better person all the time. I’m incredibly proud of him.”

Hunter Johansson and his sister Scarlett sure seem to have a wonderful relationship. We’re so happy to hear that the twins want to help people in exposed hurricane areas – and especially assist the fine heroes working as firefighters and police officers.

Please, share this story on Facebook with friends and family to spread the message of Hunter Johansson’s amazing and important work!