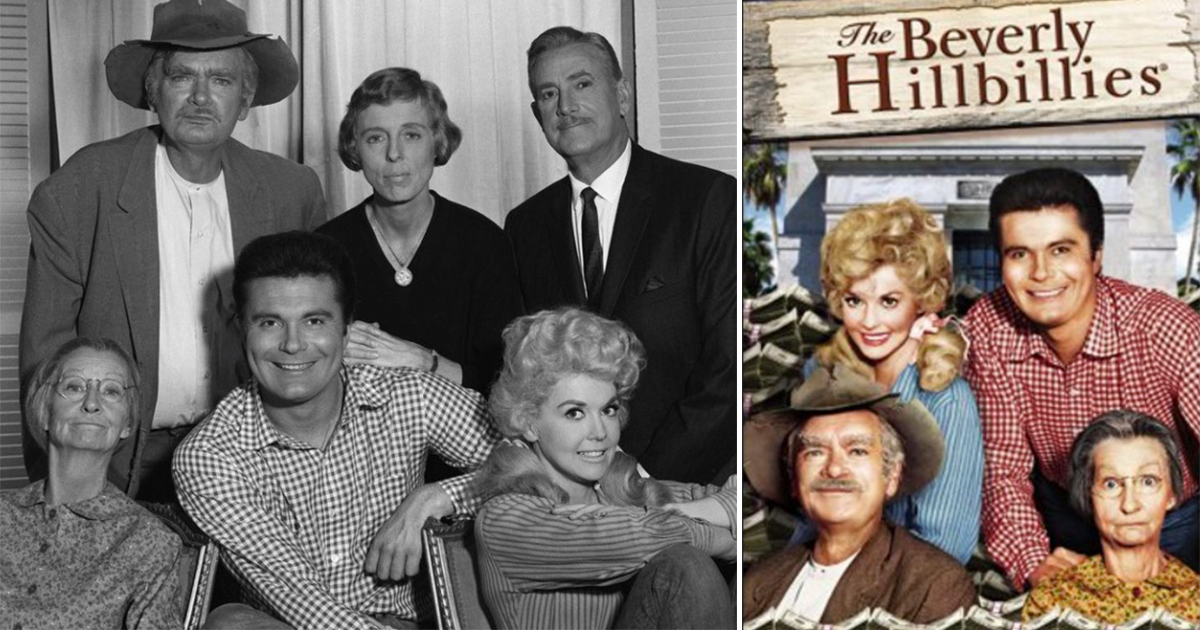 Slammed and hated by the critics. “Strained and unfunny”, according to New York Times.

But to me, ‘The Beverly Hillbillies’ is one of the greatest and funniest shows ever – I still watch the reruns, doesn’t get old. It’s timeless!

You know, sometimes I think that “The Beverly Hillbillies” is the ONLY show (especially these days) that makes any sense. NO guns, NO real violence, and even though the Hillbillies were in Beverly Hills, their back woods wisdom made a lot of sense …

The CBS sitcom, beloved by millions of Americans, was around from September 26, 1962 until March 23, 1971. Even to this day, it’s one of the most popular in all of television.

The TV show revolves around the Clampett family, who become multi-millionaires after finding a huge oil resource in their land. Their journey from rural poverty to enormous wealth really captured the audience.

Many people still have one specific favorite episode etched into their memory, while others just remember they always had a good laugh watching the series.

1. Forgot to renew the copyrights

Many fans especially love the first seasons of “The Beverly Hillbillies”. And maybe it has to do with the fact that the first episodes are very accessible?

You might have noticed that the first couple of seasons of the series are regularly shown on low-budget channels. That’s because they are not protected by any copywright. Somehow, CBS forgot to renew the copywright on the first 55 episodes when the show was canceled in 1971.

2. Buddy Ebsen and Nancy Kulp disliked each other

There are many testimonies about how the two actors had loud quarrels on the set. Above all, they argued over politics; Buddy and Nancy were on opposite ends.

Their conflicts continued even after the TV show ended.

When Nancy tried to make a career and ran for Congress at the age of 62, she received sharp criticism from Buddy, who bashed her in public. Some people think Buddy opposing Nancy caused her to lose the election.

For that, she who would never forgive her former colleague.

But that wasn’t the only character he played on the show. In fact, Max Baer Jr. also portrayed Jethro’s twin sister Jethrine for 11 episodes during the first season.

4. The voice of  Jethrine Bodine

Although Max Baer Jr. played Jethrine Bodine, he couldn’t do her voice.

As a result, he was dubbed. The one who actually said her lines was Linda Kaye Henning – daughter to the series’ creator, Paul Henning.

5. The creator was ashamed

Speaking of the creator of the series, Paul Henning, did you know that he was ashamed of the 1981 TV movie “The Return of the Beverly Hillbillies”?

10 years after the popular show ended, some of the characters in the Clampett family reunited in a television movie written and produced by Henning. But viewers and critics didn’t like it, as many thought that the series’ original spirit had been abandoned in the movie.

Paul admitted to sheer embarrassment when the finished product aired on the CBS network.

After becoming very rich overnight, the Clampett family moved to Beverly Hills, as the name of the series indicates. But the producers actually wanted the show to take place in one of New York’s fashionable neighborhoods.

However, due to financial reasons, producers was forced to find another location.

Those who watched the pilot “The Clampetts Strike Oil” may have noticed that the show was then called “The Hillbillies of Beverly Hills.”

After the first episode, though, the original title was changed to “The Beverly Hillbillies”, which was a little easier to say and more catchy.

In 2014, it was reported that Baer had sued CBS. He accused them of using his character’s name without his knowledge and claimed that the network had made a secret deal with Des Moines-based Jethro’s BBQ.

According to the actor, it interfered with his opportunity to make money on his role from the iconic television show. After long discussions, both parties were forced to compromise but evnetually reached a settlement.

Donna Douglas played the charming, beloved character of Elly May Clampett on The Beverly Hillbillies. The nine years she spent on the show didn’t only lead to fame – but also brought her love and friendships for life.

But she also had her battles.

Just like Max Baer Jr, she got involved in a lawsuit against Mattel, a toymaker company. Donna accused them of using one of her photographs on the box of the Elly May Clampett Barbie doll, which the company produced. According to Donna, they used the photo without her consent.

10. John Wayne got paid in bourbon

Did you know John Wayne had a cameo in an episode on the fifth season of The Beverly Hillbillies? But he didn’t do it for the money.

Instead, he asked for a fifth of bourbon as payment for his role in the episode “The Indians Are Coming”.

Hopefully, they paid him AFTER his performance…

11. Sonny was 8 years younger than his mother

Hollywood has had its fair share of impossible mothers. For example, when Angela Lansbury starred in The Manchurian Candidate (1962), she was only two years older than Laurence Harvey, who played her son. And the list goes on and on – The Beverly Hillbillies was no exception.

Did you know that the actress who played Mrs. Drysdale was just eight years older then her on-screen son Sonny Drysdale, the spoiled rich step-son of Milburn Drysdale.

Of all the spine-chilling murders the Manson “Family” committed, the death of a heavily pregnant Sharon Tate, who was at the cusp of superstardom in Hollywood, stands out for the horror the killers unleashed in August 1969.

Before the tragic murder, Sharon Tate had a regular role as ‘Janet Trego’ in The Beverly Hillbillies. She appeared 15 times on the show, but many people didn’t know it was her. It was quite difficult for many to recognize because Sharon was wearing a brunette wig.

13. The owner of the show’s villa tragically died

The producers were on the hunt for a luxury villa in California in order to do exterior shots. They eventually found a place called “The Chartwell Mansion”  – owned by Arnold Kirkeby

The American hotelier, art collector and real estate investor was given $500 a day so that the producers could shoot the show at his Bel Air mansion for the first season.

But Arnold Kirkeby never got the chance to see his glamorous home on screen. One year before the show aired and captured the heart of millions, Kirkeby died aboard American Airlines Flight 1 when it crashed shortly after takeoff from New York City.

His old home, The Chartwell Mansion, was the most expensive home in the United States in 2018.

By the end of the 60’s, The Beverly Hillbillies struggled with ratings.

But it was still a very popular and successful show, so when CBS went out and announced the canceling of the show in 1971, many were shocked. The same thing happened to Paul Henning’s other hit, “Petticoat Junction”.

This was dubbed a “rural purge” and CBS took the lead by axing several popular shows. The change came when the networks and the advertisers decided to target a more cultured, metropolitan audience.

“CBS canceled everything with a tree — including Lassie,” actor Pat Buttram of Green Acres famously said.

Beverly Hillbillies – what a show with great actors and actresses!

This was back when TV was great to watch; good, old-fashioned family TV. Today’s comedies could learn a great deal from shows like this one.