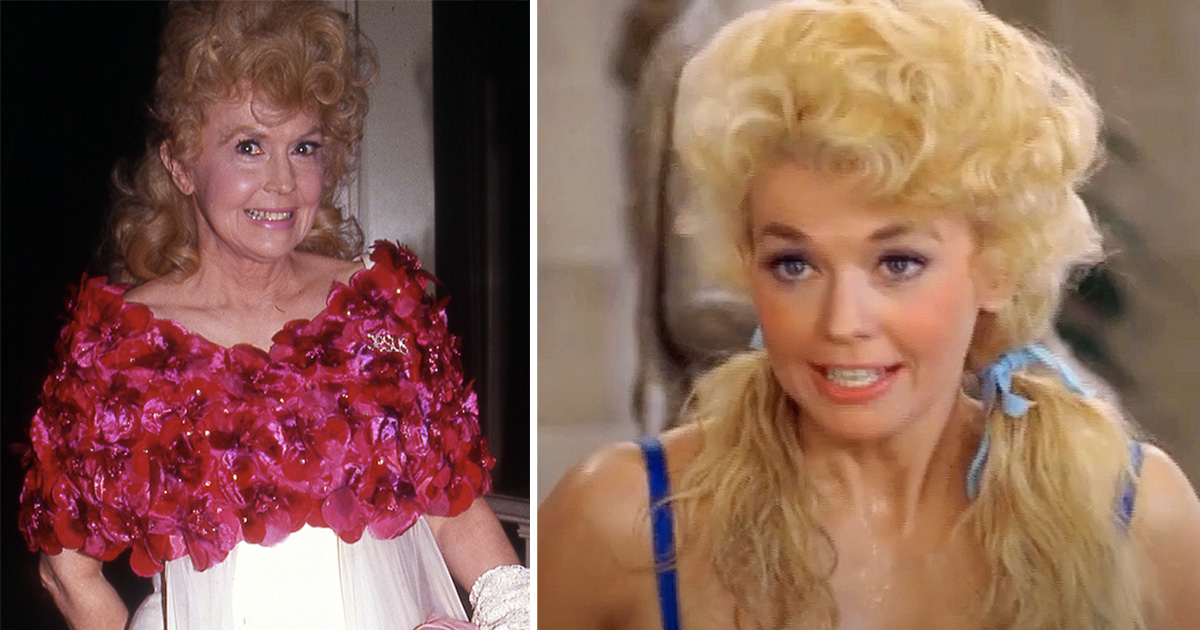 Donna Douglas played the charming, beloved character of Elly May Clampett on The Beverly Hillbillies. The nine years she spent on the show didn’t only lead to fame – but also brought her love and friendships for life.

From being a quiet southern girl to one of TV’s most recognizable faces, she did it all.

As a kid, she had no interest or thoughts towards pursuing a career in acting. At St. Gerard Catholic High School she played softball and basketball, later going on to study at Rhema Bible Training Center in Oklahoma.

After Douglas had graduated high school, she planned on simply taking big steps towards adulthood. Speaking to the Lincoln Times News, she described herself as being both naive and idealistic at this time. She got married to Roland Bourgeois at age 16 and had a son, Danny P. Bourgeois, by age 21. However, Donna later divorced her husband and decided to start modeling and acting.

She was crowned “Miss Baton Rouge” and “Miss New Orleans” in 1957, which opened up a whole new world for her. On the back of that success, she decided to move to New York, landing her first gig in show business as a print-ad model for a toothpaste advertising.

Moving to New York was a huge thing for Donna Douglas. She came from a small community, one where big city lights and cars weren’t common.

“I had never been away from home,” she said. “I grew up poor. My parents didn’t have a car. I never had a background for show business.”

She recalled one specific moment before her flight to New York when a man at the airport in New Orleans asked if she wanted to change her reservation so that she could get to New York earlier.

“I didn’t even know they had two airports in New York,” she said laughing.

Now, as we’ve mentioned, Donna never had any plans to become an actress. It just happened to be a decision she made that would lead to her into starring in a huge success series, The Beverly Hillbillies.

In the show, when the fictional Jed suddenly earns millions in the oil business, he decides to move to Beverly Hills, California, along with his family. The problem is, he and his family still maintain the hillbilly way of living, turning the show into a comedy the likes of which had scarcely been seen before.

The Beverly Hillbillies aired for the first time in 1962, and it was a huge success. It rose to the No. 1 spot within three weeks of the first episode airing, according to IMDB; faster than any series in history.

The audience absolutely loved the show during the 11 years it ran. All told, there were a total of nine seasons and 274 episodes filmed before it was cancelled in 1971.

The Beverly Hillbillies had plenty of great characters. Max Baer Jr played the role of Jethro Bodine, son of Jed’s cousin, Pearl, a naive and borderline dim-witted man who every once in a while showed off his great math skills.

Max became hugely popular in the role of Jethro, but that was also the case for Donna Douglas, who played the role of Elly May Clampett, the only child of Jed and Rose Ellen Clampett.

Sometimes in life, you just get the feeling that fate has brought everything together. This could be regarding love, work, or maybe something as simple as finding a parking spot across the street.

Well, in Donna Douglas’s case, she was surely in the right spot at the right time. The audition featured more than 500 girls vying to play Elly May. But Donna ended up being the one who got the role.

Just like her character in the show, Donna came from a poor southern place. In Donna’s case, it was Pride, Louisiana, and she felt at ease playing Elly May because of the resemblance the character’s situation had to her own childhood.

During the audition, the CBS network actually asked her to milk a goat.

“I had milked cows before,” she recalled in an AP interview in 2009. “I figured they were equipped the same, so I just went on over and did it.”

The audition was an open-call one, and Douglas had travelled to the west coast of the U.S., to Hollywood, California, in order to attend. Her excitement over getting the judge’s attention was almost to bear, she recalled. She really wanted the part.

“I thought my heart was gonna pop wide ope, “she said. “All I could do was bob my head up and down.”

“I wanted my folks back home to be proud of what I did.”

The audition was a success. However, shortly afterwards, Donna would find herself involved in several unfortunate events.

Getting a spot on the show

Firstly, she ended up in the hospital for more than two weeks following a car wreck. After the audition, as she headed home, a man, who was a famous actor at the time, rear-ended her vehicle.

The resulting hospital stay almost cost her the opportunity to portray Elly May in The Beverly Hillbillies. The producers of the show had five girls, including Donna, that were shortlisted for the part, and she only had a couple of days before the screen tests.

“I was pretty wobbly, but you better know I was there,” she said.

Of course, it was a success. Even though she spent time in the hospital, Donna was chosen to play Elly May. She couldn’t have known at the time just how big (and long-lasting) it would turn out to be.

Donna got to act with her Southern accent and even get accustomed to the many animals that her TV character loved. Elly May Clampett was supposed to be 17 in the series and Donna was 30 when the show started airing. Even so, the beautiful woman had the audience falling in love with her.

She also adored starring beside Max Baer Jr, who had the role of Jethro Bodine.

“He gave me a hard time then and still does,” she said according to the book Dashing, Daring, and Debonair: TV’s Top Male Icons from the 50s, 60s, and 70s.

“But we all were like a family. Max could complain about any one of us (for whatever reason), but do not let someone else say something about one of us. Boy — would Max really let that person have it. He’d defend us just like with a real family member.”

The Beverly Hillbillies was a huge success for the nine years it aired on CBS between 1962 and 1971. Then, all of a sudden, it was cancelled.

Fans didn’t understand why, and the same went for the cast. Donna Douglas recalled that the decision to cancel the TV series came as a shock to her and her fellow actors on the show.

“I didn’t know it was going to end,” she told Lincoln Times News. “They kept telling us we would be coming back for next season and then they would say no and kept see-sawing back and forth. We never had a farewell finale.”

Nine years on The Beverly Hillbillies truly changed Donna Douglas’s life. She went from a Southern girl – one who had never even thought about having an acting career – to a beloved actress with a marvelous TV legacy.

Not only was the show a life changing event for Douglas, but she also found love, and friends for life.

In 1971, Donna Douglas married Robert M. Leeds, who was the director of the show. They spent nine years together before getting a divorce in 1980.

Just like Donna explained earlier, the cast members were like a family. Which isn’t that strange, considering the fact that they made a staggering 274 episodes together.

However, she developed a particularly special relationship with Buddy Ebsen, who starred as Jed Clampett. In 1961, the year before Hillbillies premiered, Ebsen had played the role of Doc Golightly, the father of Holly Golightly (played by Audrey Hepburn) in the classic movie Breakfast at Tiffany’s.

For Donna Douglas, Ebsen became more of a father figure, and a great friend during the years they starred in The Beverly Hillbillies together.

Great friends until the end

She described him as a “a wonderful man, very much like my own father, a quiet, reserved, and caring person”.

In 2003, Buddy Ebsen passed away, aged 95. Donna Douglas, together with Max Baer Jr., visited him in the hospital. At his funeral, they both delivered eulogies.

In an interview with Confessions of a Pop Culture Addict, Donna Douglas explained that her feelings for Buddy Ebsen ran deep. They remained great friends after the show as well.

“I loved Buddy Ebsen. He reminded me so much of my own dad,” Douglas said, according to The Bay Net.

“Most of my scenes were with Buddy, and most of Max’s with Irene. Buddy was just a wonderful man. I related to him so easily. The night before he died, Max and I went up to the hospital to see him.”

So, what did Donna Douglas do following the cancelation of The Beverly Hillbillies?

Well, to start with, she actually performed together with Elvis Presley himself. In 1966, they starred in Frankie And Johnny together.

She also shared screen with the likes of Doris Day, Tony Randall and even Dean Martin.

Following her success in The Beverly Hillbillies, Donna starred in several TV shows and also in the TV movie about the Clampett family, which aired in 1981.

Douglas could’ve gotten plenty of more gigs in show business, but she turned down many of them. Why? Because of her sexy pinup role in The Beverly Hillbillies, producers wanted her to show more skin and play provocative roles in upcoming movies. But Donna refused.

“I didn’t want to be put in a place of compromise,” she said. “So, I went to night school and got my real estate license.”

Yes, as well as getting parts in some TV shows, Donna Douglas became a real-estate agent. She was, according to WAFB, selling million-dollar homes.

So, did she enjoy her new occupation? And was she any good?

“Oh no, I wasn’t good in real estate,” Douglas said, “You know why? Because I’ve learned I’m a service person. I’ll tell ’em what’s good about the house, but I’ll tell them what’s wrong about it, too. And you don’t do that!”

Douglas’s last job in the Hollywood spotlight was in the 2013 movie Chronicles of Life Trials. As well as doing real estate, she had a great interest in music and was singing in a gospel choir.

In 2015, Donna passed away at Baton Rouge General Hospital in Louisiana, near her hometown of Zachary. She was 81 years of age.

Donna Douglas – cause of death

The cause of death was pancreatic cancer, according to her niece Charlene Smith.

“She was always happy, always beautiful. You always saw her with all her makeup on. She never looked her age.”

“We lost a dear family friend today…The world knew her as Ellie Mae Clampett. A Beverly Hillbilly. But we knew her as our precious Donna who never met a stranger, had style and grace, had a kind heart, always wore pretty pink, and loved people,” the post read. “I’m thankful for the time we got to spend with her and all the wisdom and lessons that the kids learned from her! I will forever hear her whistle and “y’all come back now, hear. See you on the other side, my friend.”

We will never forget Donna Douglas and her amazing performances as Elly May Clampett on The Beverly Hillbillies. Thank you, for everything!