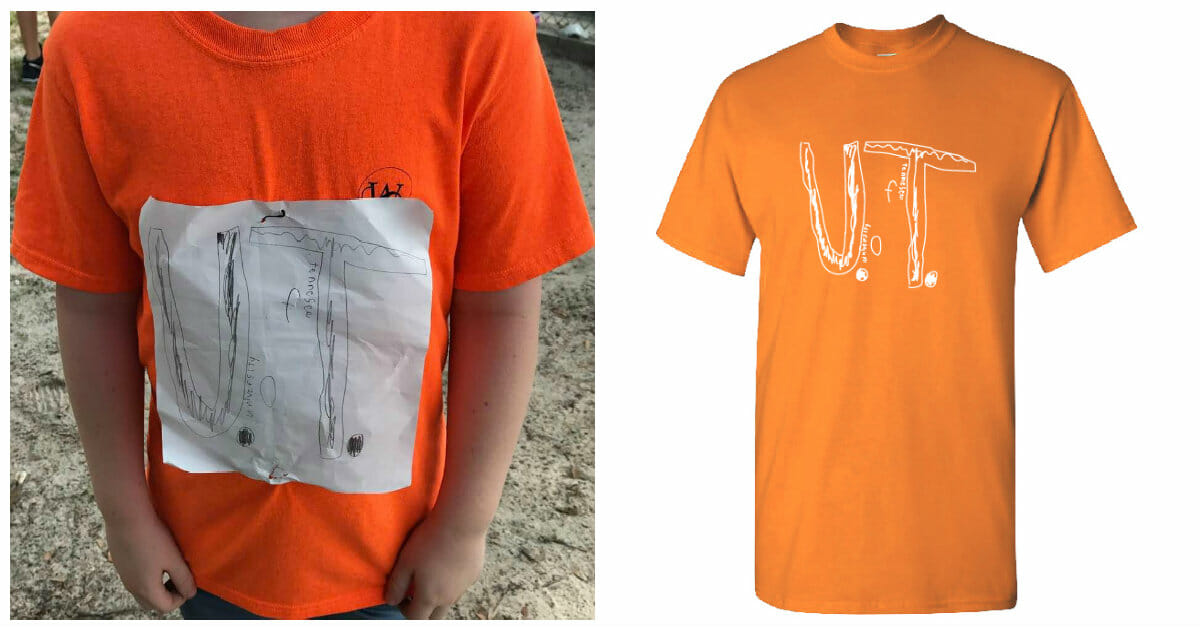 A great way to show your pride in your college is to wear some of their merchandise. Donning the school’s logo and colors really shows your support.

But recently one little boy’s makeshift tribute to his favorite college got him mocked by some of his classmates. He was crushed… until the school got word and responded with an awesome surprise.

One of her students was excited, and wanted to wear a University of Tennessee shirt, since he is a fan of their football team, the Vols. The only problem was he didn’t own one, so teacher told him he could wear an orange shirt—one of the school’s colors—to show his pride.

Laura says the boy was “so excited” and proudly showed off his orange shirt when they day arrived—and the teacher was even more surprised that he took it a step further.

The boy drew a “U.T.” logo and attached it to the shirt:

However, his excitement didn’t last long. “After lunch, he came back to my room, put his head on on his desk and was crying,” Laura said.

A few girls in the class—who Laura says didn’t even participate in the event—made fun of his homemade jersey. Laura was crushed to see her student so deflated.

“He was DEVASTATED,” she wrote. “I know kids can be cruel, I am aware that it’s not the fanciest sign, BUT this kid used the resources he had available to him to participate in a spirit day.”

Laura said that she was planning to buy the boy a University of Tennessee shirt. She shared the story asking if any of her friends had a connection to the university who could help “make it a little extra special for him.”

Little did she expect, the post was shared thousands of times on Facebook, with strangers all over the country reaching out for support: “I’m so amazed, humbled, and a little bit overwhelmed,” Laura wrote.

It wasn’t long before the University of Tennessee got word, and sent the boy a care package full of school swag.

He was so excited!!

Everyone was blown away by the surprise: “All who saw had either goosebumps or tears while we explained that he had inspired and touched the lives of so many people,” Laura said about her student’s reaction to the care package.

Filled with hats, shirts, bags and souvenirs, the school made sure this boy would never be without team gear: “The Vols Nation has made sure he will be set for college colors day for quite some time!” Laura wrote.

The boy gave out some of the swag to his excited classmates, like matching bracelets and water bottles.

Our class banded together!? (I tried to get the sign, but sometimes it hard to get 22 kids to pose for a picture.)

It sounds like a happy ending to this story… but it didn’t end there.

You asked for it, and @UTVolShop made it happen. ?? https://t.co/nBGYmyooC1

And it’s a best-seller: according to Today 16,000 shirts have already been sold. Part of the proceeds will go to STOMP Out Bullying.

Demand was so high that it crashed the shop website… not bad for a handwritten sign that kids made fun of.

“When I told him that his design was being made into a real shirt and people wanted to wear it, his jaw dropped,” Laura wrote. “He had a big smile on his face, walked taller, and I could tell his confidence grew today!”

It’s clear that the boy’s logo has become a symbol of pride for the university, and even the school’s interim president Randy Boyd praised his creativity and support for the school:

I was touched to learn of a young Florida school student’s heart for the University of Tennessee, and I LOVED his imagination behind designing his own shirt.  So many of us admire his love for UT and it’s awesome to see everyone step up to send him some UT gear!#EverywhereUT pic.twitter.com/83YqjzBxag

It’s an inspiring story that shows the power of kindness. Spread positivity by sharing this story!