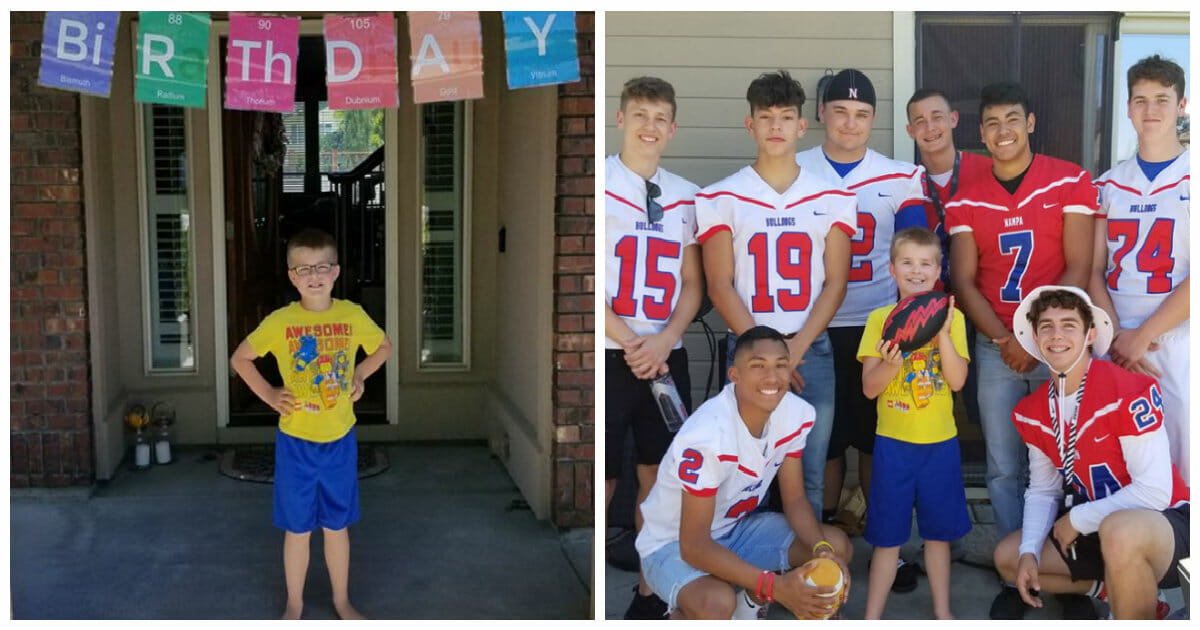 When you’re young, your birthday is a huge deal. Every kid looks forward to their big day: the presents, the cake, and the party with friends.

But when no one RSVP’d to a young boy’s recent birthday party, he and his mother were left disappointed… until a group of unlikely new friends came in to make it a party no one would ever forget.

Christian Larsen, from Meridian, Idaho, has autism, which can make it hard to socialize properly in his elementary school.

“The social part is the hardest,” his mother, Lindsay Barrus Larsen, told Inside Edition. “He gets distracted. His brain is running 100 mph… his attention gets pulled away and he just wanders off.”

Despite being different from his peers, Christian is still a fun, happy boy with a strong interest in science. So when his 9th birthday was approaching, he wanted to have a science-themed party and invite his classmates. Despite her past reluctance, mom agreed, and they sent out invitations.

Sadly, they didn’t get much of a response. No one RSVP’d to their invites, and mom watched as Christian invited his classmates in person. While one friendly girl agreed to go, his other classmates said no—or just ignored him.

“At first I was just hoping that with the end of the year chaos, that the invitations were overlooked,” Lindsay wrote on Facebook. “But, after seeing the personal interactions, I’m thinking maybe there is more.”

“I hoped that the classmates would come,” Christian told Inside Edition. “But they didn’t… We were literally begging them to come.”

While the mom was saddened by the situation, she wasn’t mad at anyone for declining the invite. Instead, she set out to throw a great party with the few guests who would be there.

We've never done a class party for Christian before. There was one year in preschool where a couple girls from his class…

Posted by Lindsay Barrus Larsen on Friday, 31 May 2019

However, one of Lindsay’s friends, Blythe Ben-David, saw the post, and while she was in Texas and couldn’t attend the party, she reached out to a friend who could pull a miracle for the family: Dan Holtry, the football coach at Nampa High School.

“He has always been a great guy, a genuine guy with a big heart,” Blythe told CNN. “I knew if anyone could help it would be Dan.”

Holtry thought it would be a great idea to invite the players from his football team to support Christian. The high schoolers didn’t think twice about agreeing to help.

“The kids, before I could finish the text, it feels like they were like, ‘We’re in… Coach, we are in!’ They were like when do we do it, let’s go. I was amazed how much they wanted to participate in this and take care of Christian,” Holtry told KTVB.

“Instantly I wanted to do it, and I know these guys did too! Right away we texted back yeah, let’s do it, we’re in!” player Donovan Estrada said.

A lot of the players showed up at the party, and chanted Christian’s name as they entered. The birthday boy was so happy he jokingly fainted on the lawn before giving the players high-fives.

“I felt a little bit weird and wowed,” Christian told Inside Edition about the surprise. “And a little bit of excitement.”

The team had traveled a half hour to attend the party. And they didn’t just pop in for a quick hello—they stayed a long time, playing games with Christian and the other kids. They even brought him a few gifts, including two footballs.

“They stayed for the entire party,” Lindsay said, adding that they were “were oohing and ahing” as Christian opened his gifts. “You would think it was their own birthday party.”

The team even stayed for cake and presents!

“Christian often plays alone, or wanders off, but with the players there helping organize games, he became part of the action,” she told CNN.

“He was playing alongside his peers, as well as the football players. I think it helped the other young children interact with Christian too.”

They played and played!

The surprise meant a lot to Christian—and turned a potentially disappointing day into one he’d always remember.

“This is probably the best birthday ever, I have lots of best days in my life, and this might be one of them,” Christian told KTVB.

The sweet story has gone viral, and many people have reached out to the football team with donations and words of kindness. But the team says they didn’t do it for any recognition.

“I’ve heard it’s gone international, but at the end of the day, that’s amazing, but it’s all for Christian and I’m just glad his story has been getting out,” teammate Cade Smith told KTVB.