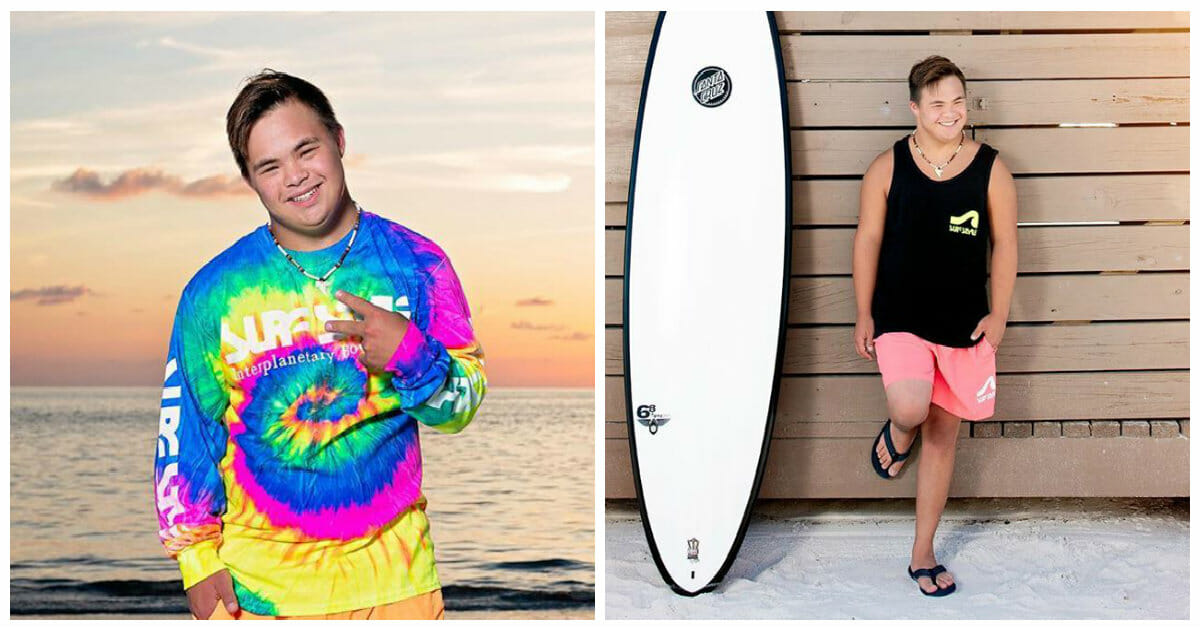 According to the CDC, a big part of the population—about one-in-four people—lives with some kind of disability. And yet, you wouldn’t know that from looking at advertisements.

While there has been a push for more diversity in the media in recent years, people with disabilities are still greatly underrepresented, particularly in advertising.

But one beachwear company is helping to change that, showcasing a new model who perfectly represents their brand—and also happens to have Down syndrome.

The groundbreaking campaign comes from Surf Style, a surf clothing and souvenir chain, who hired 16-year-old high school junior Ethan Holt, from St. Petersburg, Florida, to model some of their products.

Ethan has Down syndrome, which doesn’t make him the most typical face of a clothing line. But the teen’s love for water sports and the beach makes him a perfect spokesman.

“He loves the beach. He’s on the Special Olympics paddleboard team, he’s on the swim team, he’s a water baby,” Ethan’s mother, Phoy Holt, told FOX 13. Ethan has won multiple gold medals, on both a regional and state level.

“It does feel good to be at the beach, get a tan,” Ethan said.

Introducing our newest campaign featuring Ethan Holt in collaboration with @helpusgather ? To learn more about this inspiring young man, click the link in our bio ?‍♂️?

The photoshoot was the result of a collaboration between Surf Style and Help Us Gather (HUG), a nonprofit that works on behalf of special needs people, which according to their site “exists to provide every individual a sense of inclusion, confidence and friendship.”

“One in four adults has a disability; there’s not one in four marketing campaigns that features that,” HUG’s Robin Lally told FOX 13. “Having our friends represented in media and marketing, not only does everyone love it, they can also be role models for others with special needs, for their families who can look up and say, ‘I can model, I can be a professional, I can do things.”

And Surf Style was thrilled to provide the opportunity.

“We strive to create an atmosphere of inclusion in all of our stores,” said Tara Malinasky, Surf Style’s marketing manager. “We hope this sets an example for other brands to feature those with disabilities in their marketing efforts, as well.”

Weekends are for the beach ?

And Ethan, with his athletic experience and camera-readiness, turned out to be a perfect model.

“He’s definitely that active guy that you would expect to be representing the brand,” Lally said, according to the company’s website.

“I guess that you can say that it was a match made in heaven,” Phoy told Fox News.

The mom says that Ethan doesn’t let his difference stand in the way of some starry aspirations: “He wants to be a YouTuber; he wants to be a social media influencer; he loves to sing, and dance, and rap; he gets into all kinds of things,” she told Surf Style.

She can definitely add “model” to that list—it’s clear that Ethan has gotten a taste for fame: “My friends on the swim team and a couple of girls, even my coach knows, say I’m a famous model now,” Ethan said.

HUG and Surf Style both hope that the photoshoot will help inspire other brands to take a chance on representing people with disabilities.

But more importantly, Phoy believes her son can inspire other people like him to pursue their dreams.

“He’s a big influence and example for all the little guys that also have Down Syndrome, and they see what he can do and [are] very proud of that,” she said.