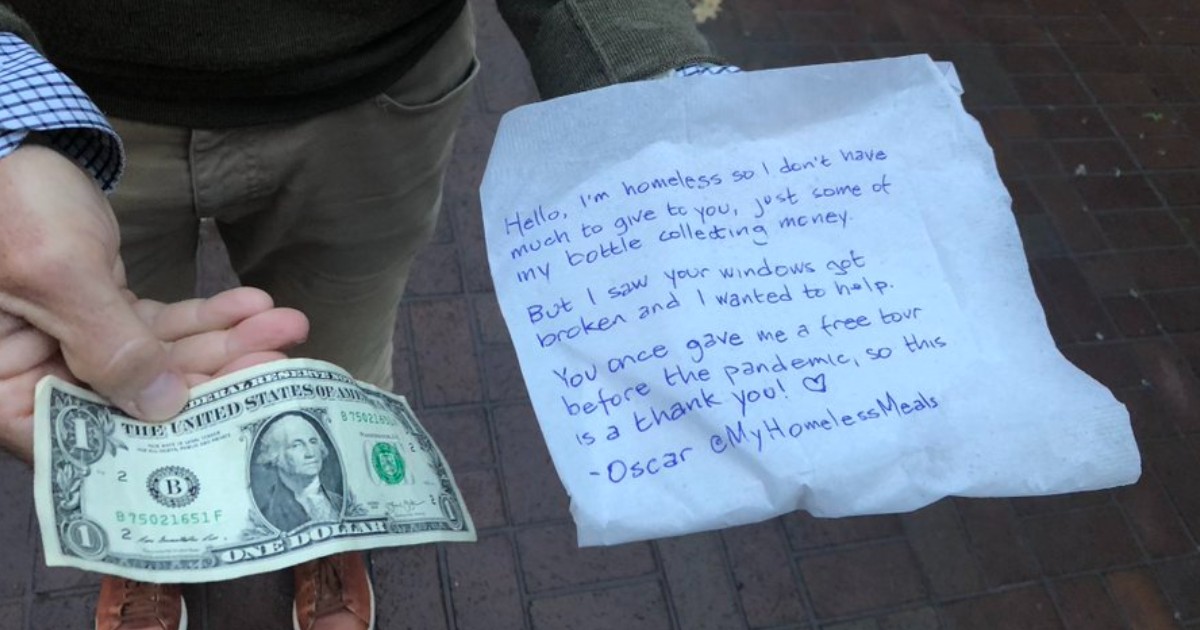 Since the murder of George Floyd, protests have sprung up around the country. While the majority have been peaceful a few, like the one that occurred Sunday night in Portland, Oregon, have turned into riots.

Buildings have been damaged, statues and monuments have been torn down, and fires have raged.

Following the destruction, community members often step up to clean up and help in any possible way.

So it wasn’t odd that Kerry Tymchuk, Executive Director of the Oregon Historical Society, found a few donations to help pay for the damage done to the historical society’s building.

But there was one donation that caught his attention.

Hello, I’m homeless, so I don’t have much to give you. Just some of my bottle collecting money. But, I saw your windows got broken and I wanted to help. You once gave me a free tour before the pandemic. So, this is a thank you.

“We’ve been fortunate to receive many generous donations to OHS over the years–some upwards o a million or more dollars,” Tymchuk told KOIN. “No donation means more to me and to the society than this dollar donation from Oscar.”

The historical society suffered broken windows and damage from flares that had been tossed inside, but the majority of the artifacts were unharmed. A quilt was located several blocks away from the building, but Tymchuk is hopeful that once it dries, it will still be able to be displayed.

We can all learn a lot from Oscar. Even if we don’t have a lot to give, each one of us has something.

Share this to thank Oscar and inspire others to be as giving as he was.