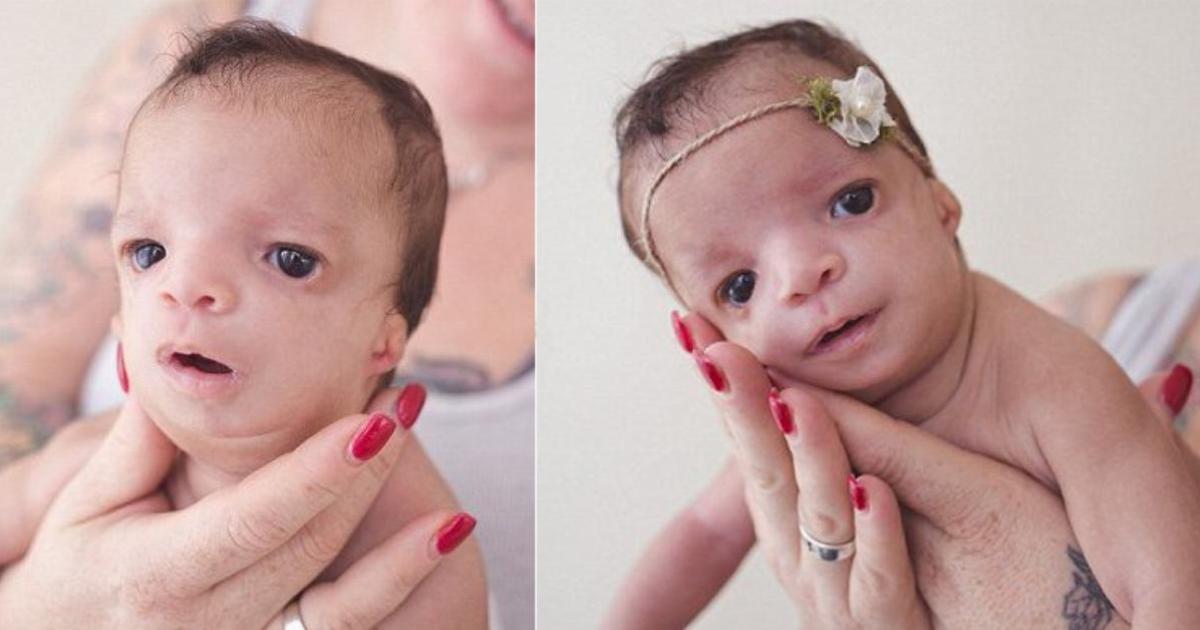 When Christina Fisher, 36, became pregnant, she was forced to take the toughest decision of her life. She lived literally at the bottom of society, had no money, and was sleeping in a caravan at the time she discovered that she was pregnant. The father of the child had left and disappeared without a trace. Christina felt that she simply could not take give the child the security that it deserved. Adoption thus seemed like the best choice. Obviously it wasn’t an easy decision, but Christina felt it had to be done. Using an adoption-agency, she found a few people who were willing to care of her child. But shortly after her baby’s birth, the unthinkable happened. The daughter, named Abigail Lynn, was born with Treacher Collins syndrom, caused by a mutation in a gene on chromosome 5. It made little Abigail’s face look a little different, something that shocked the adoptive parents to the point that they refused to adopt the girl. They rushed out of the hospital as soon as they saw Abigail. That’s when the distraught mother Christina felt compelled to act.

36-year-old Christina Fisher from Florida rocked her 6-month-old daughter, Abigail Lynn. It was a miracle that she even still had her daughter in her own hands, as she’d already decided to put her out for adoption and had already accepted the idea that she would probably never see her again.

When Christina became pregnant, she was unemployed, lived in a broken caravan and was afraid she wouldn’t be able to take care of her child. But shortly after the birth, in January 2016, everything changed.

The doctors told Christina that her daughter was born with a very rare genetic disease: Treacher Collins syndrom (TCS). TCS manifests itself a way that renders the face underdeveloped. But otherwise, children born with TCS tend to experience few symptoms.

When Abigail was born looking ‘different’, it came as a shock to many – certainly to her adoptive parents. The doctors hadn’t seen anything suspicious on the ultra sounds, and as Abigail expected, the adoptive parents panicked inside the hospital when they were visiting their future adopted daughter.

Christina took the adoptive mother’s reaction as a sign, a sign that it was she herself who was meant to take care of her child.

“I realized then that I could never leave her,” says Christina.

Abigail is otherwise completely healthy and will be able to live a normal life. She does, however, need to undergo a few corrective interventions when she gets a little older. A fundraiser has been launched to help Christina give Abigail a more secure life. So far, the mother has received over $24,000 from strangers worldwide.

Christina also gotten in touch with photographer Oksana Peery and together they took these stunning beautiful photos of Christina and Abigail, which have touched thousands of hearts.

In retrospect, Christina is very happy with her decision. In her eyes, she bore the most wonderful child in the world.

I think Christina perfectly demonstrated what it means to be a good mother: to show unconditional love, no matter what.
Please share Christina and Abigail’s wonderful story with your family and friends if it moved you, too.