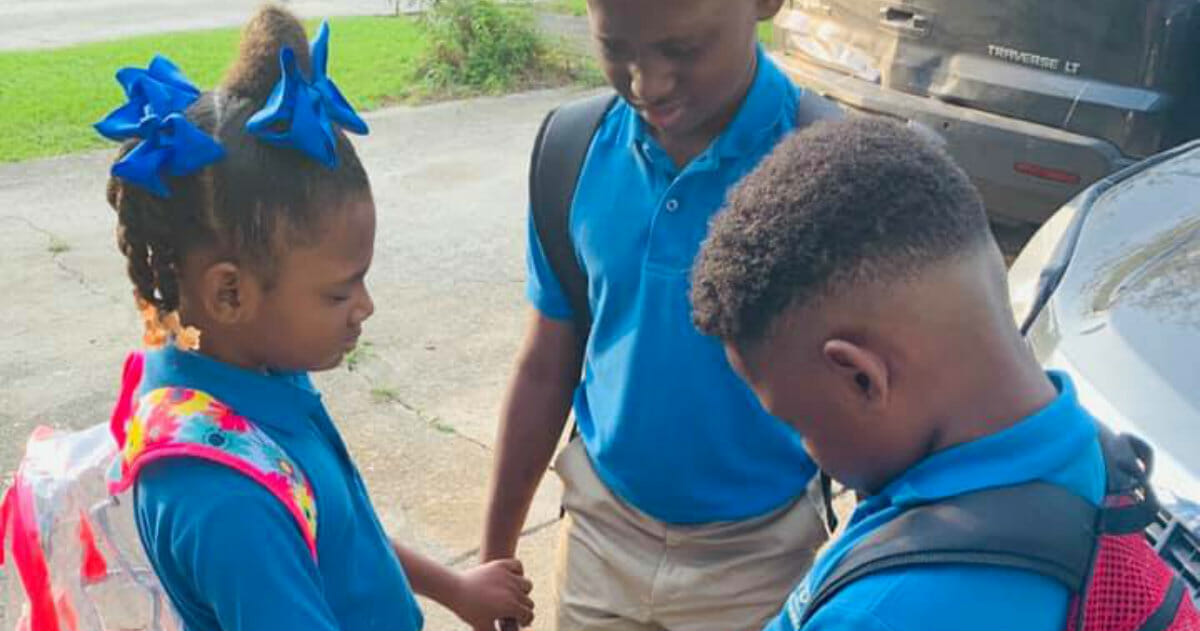 Many parents take photos of their kids their first day of school. Every year is another milestone, full of emotion for both parent and child—the kids nervous about another school year, the adults fretting about sending their kids off into the world again, and remembering they’re another year older.

These photos always tell a story—but one family’s photo tells one of solidarity and faith on the kids’ big day.

On August 5, Jamisha Harris, from Baton Rouge, Louisiana, snapped a photo of her three kids, on their way to their first day of the school year at Idea Bridge Academy.

But it was no ordinary photo of them smiling for the camera or getting on the bus. Instead, it was a photo of the three kids holding hands, heads bowed in prayer:

Dear GodThis morning I’m feeling nervous and a little unsure but thankful, I pray for my children on their first day…

“Dear God,” Jamisha wrote in the photo caption, “This morning I’m feeling nervous and a little unsure but thankful, I pray for my children on their first day of school.”

“I ask that this school year you would use every person and every experience and every lesson to shape them into Your image.”

It’s an inspiring photo that struck a chord with people—and went viral after it was picked up by WAFB Channel 9, who shared the photo on their Facebook page.

“This is awesome. We need more of this in our world today,” one commenter wrote. “Their parents definitely raise them right.”

After the photo went viral, Jamisha revealed that the moment of prayer followed a difficult year for the family. She told Fox News that both she and her husband had recently lost their jobs—and they lost their apartment just the day before.

And on top of their personal struggles, they’re also still rattled by the recent mass shootings—a sentiment shared by many sending their kids back to school this fall.

“It has been very hard for all of us,” Jamisha told Fox News. “And with all the tragedies events that have been occurring in the world lately, I feel nothing is safe for my children and we are praying because I am sending my children into this wicked world and mommy is not there to protect them.”

The kids look beautiful have a bless school year everyone

In light of this, Jamisha’s words of prayer are especially meaningful. While the first day of school is a big deal, the mom says she and her family pray frequently.

“We pray for everyone: teachers, bus driver, friends, family members, we pray for a change and peace,” Jamisha said. In a world full of uncontrollable tragedies, sometimes that’s all you can do.

But at least some of Jamisha’s prayers have been answered, thanks to some help from kindly strangers. After the photo went viral, Jamisha started a GoFundMe page to help them get back on their feet and find a new home.

That’s the power of prayer for you.