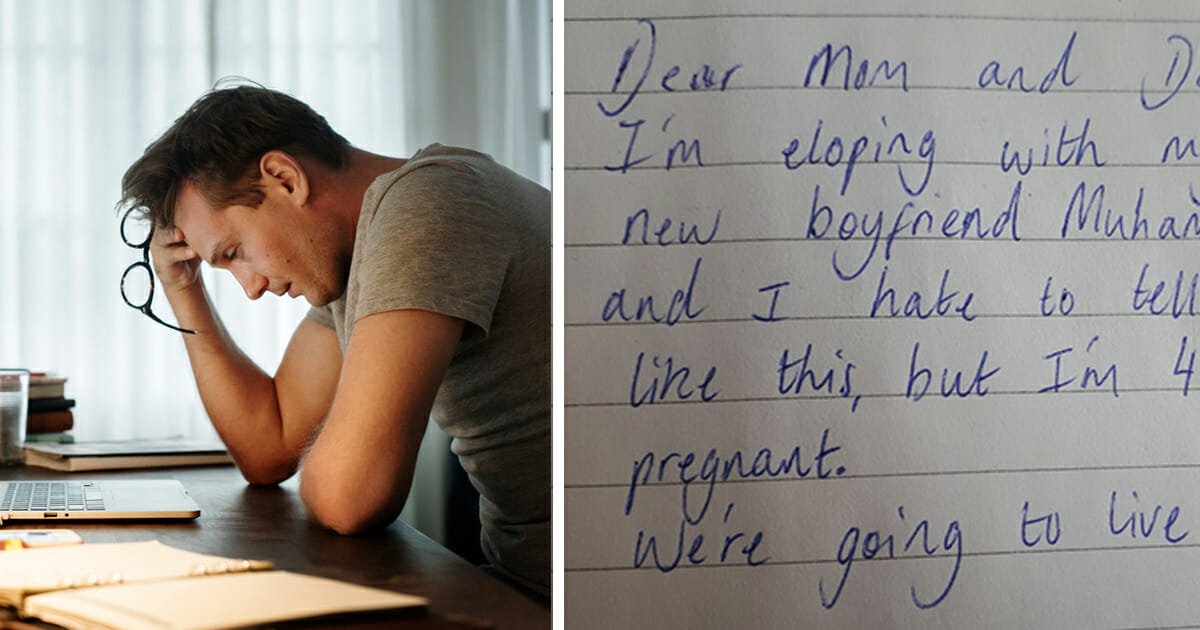 It doesn’t matter how old your children might get, as a parent you’re always going to feel instinctually responsible for them.

That said, it can never be said that raising a child is a simple task.

Of all the periods of parenthood you’ll encounter, perhaps its the teenage years that are the most challenging. Hormones are running wild, school can be an after-thought, peer pressure is introduced and the world is no longer something they’ll only experience with you by their side.

Put plainly, being the parent of a teenager can be a truly stressful time …

One dad experienced firsthand just how stressful, when he found a note left by his daughter.With his favorite football team having lost a game, he was down in the dumps as it was. He decided to try and get over his mood by taking his daughter, Anna, out to grab some ice-cream.

Except Anna wasn’t in her room. He hadn’t heard or seen her leave the house, and so panic set in.

It was then that he noticed a hand-written note placed on her bed. It read:

I’m sorry to have to tell you like this, but I’m eloping with my new boyfriend Muhammad.

And that’s not all – I’m expecting a child with Muhammad, and I’m already three months pregnant. We’re going to settle down in his trailer, and he says that he wants even more children. I’m so happy!!! And guess what? We’re going to get married next week!

He’s also explained to me that weed isn’t as bad as some people make it out to be, so now we’re growing 18 plants behind our trailer. We’ll have enough for him and his friends, and in return, they’ll give us as many pills as we want.

I do hope that they find a cure for herpes soon, so that Muhammad can get better – he really deserves it. Don’t worry about money – Muhammad’s friends Juan and Stanislav are in the movie business, and they’ve arranged for me to become an actress!

The job pays pretty well, 50 dollars per take, and I get another 50 if there are more than three men in the same scene. So don’t worry about me – I’m 16-years-old and can take care of myself.

The next time I come to visit, you’ll get to see your grandchild!

P.S. Dad, none of this is true – I only popped over to Emma’s place to watch some TV. I just wanted to remind you that there are worse things in life than The Patriots losing to The Eagles!

If this didn’t put a smile on your face, we don’t know what will.

Share this with your friends and family to give them a good laugh today!