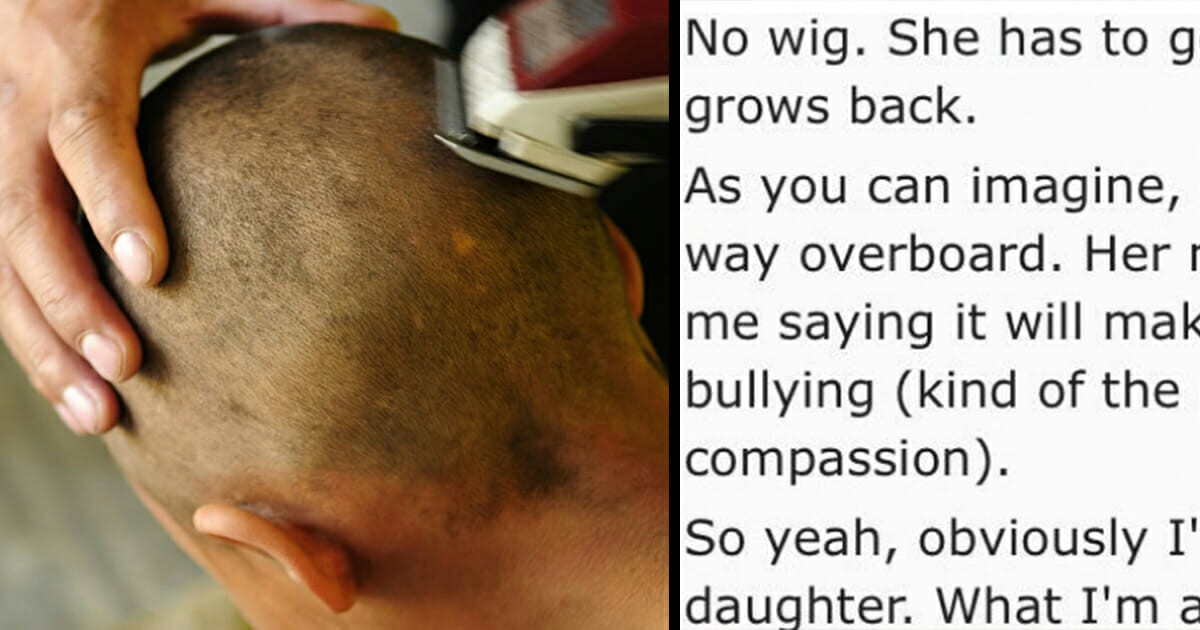 No matter how much we’d like to believe our kids are perfect, the stark truth is that none of them are.

Now, I’m not suggesting the majority of parents aren’t doing their jobs – far from it – merely that childhood is a steep learning curve, one in which virtually all participants will make mistakes they’ll look back on and regret.

Perhaps what matters most when such things occur isn’t what has actually happened, but rather how said child learns from it and moves on. It’s precisely for this reason that we introduce the concept of punishment early: a kid does something wrong and they’re forced to suffer the consequences of said act. It’s teaches them a simple lesson and, hopefully*, they don’t do that same thing again.

Of course, punishments can vary in degrees, ranging from a metaphorical slap on the wrist to methods that the offending child won’t likely forget.

In any case, one dad’s choice for his daughter certainly sits in the latter of those two categories. She was caught making fun of another student at school who had lost all of her hair to chemotherapy. When her dad found out, it’s safe to say he wasn’t impressed.

He decided to take steps to ensure she never did it again. He shaved her head bald, so that she’d know what it felt like to be in her victim’s shoes.

Needless to say, his method of rebuke has drawn plenty of criticism online, but he isn’t phased by any of it. On the contrary, he told CafeMom that he thinks it was a perfectly acceptable reaction.

He also told CafeMom that his daughter is dating the other girl’s ex-boyfriend, which contributed to the drama that played out.

“That’s what escalated the situation and resulted in the wig incident. Supposedly they have been arguing in class ever since my daughter started dating the guy in question. Basically just stupid teenage ‘he said she said’ nonsense.“Not how I’ve raised my daughter to treat people and it truly disgusted me to hear how she acted from her deputy principle. She showed no remorse. She tried to excuse her behavior by saying the girl in question deserved it. Again, I don’t care what she said, that behavior is inexcusable.”

The dad is open about the fact that many people – the girl’s mother included – believe he took things too far by forcing her to shave her head. 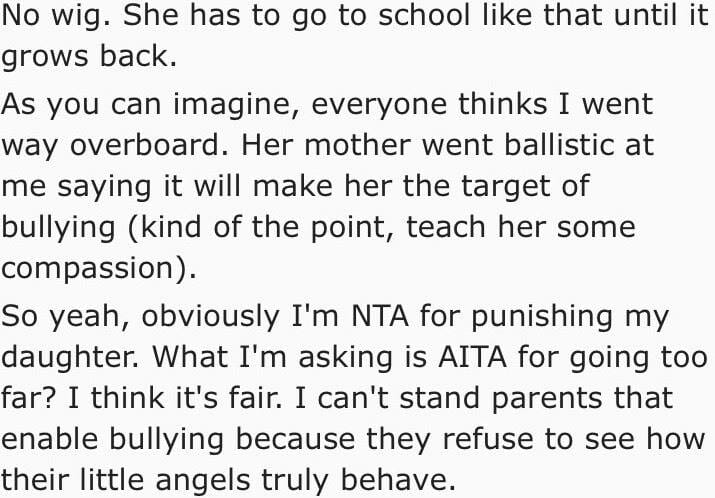 “I came up with the punishment because I thought my daughter had an extreme lack of empathy for the girl she bullied,” he says.

“My daughter knows this and that is what really disgusted me with her behavior. It demonstrated a complete and utter lack of empathy. I hoped that her going to school bald and walking a mile in the other girl’s shoes would teach her a lesson.”

We want to know what you think. Was it too far to shave his daughter’s head for what she did? Let us know your thoughts in the comments box below.