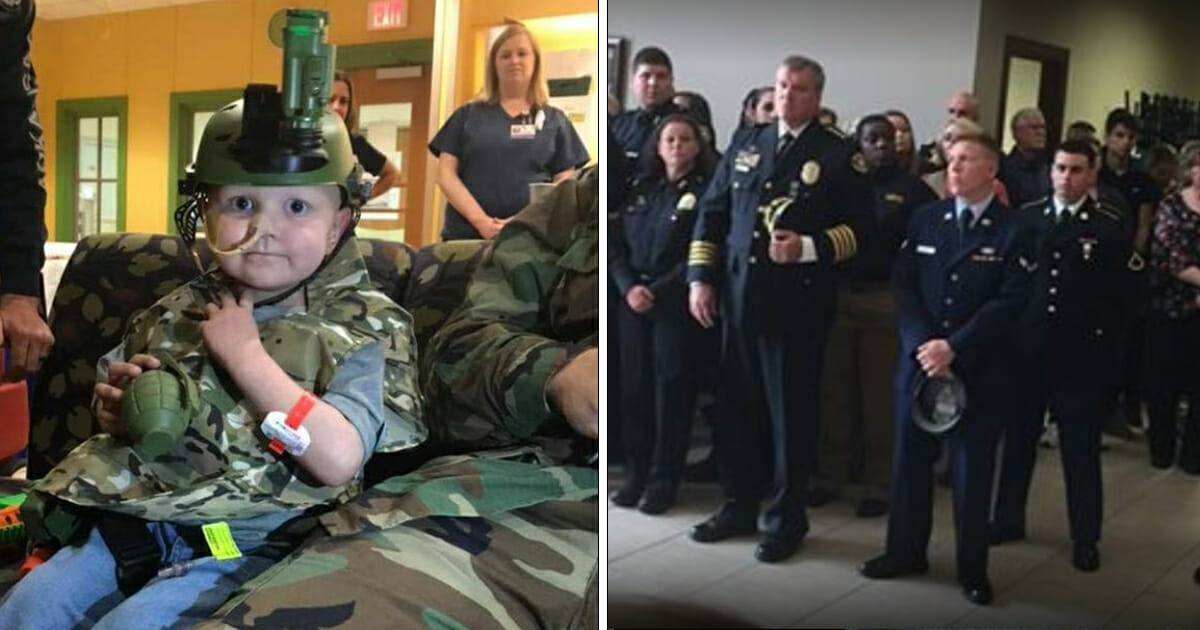 A touching tribute was paid at the funeral service of 5-year-old River “Oakley” Nimmo, who loved being an ‘Army Man’ so much that his only dream was to become a soldier.

The boy’s family had asked active service members and veterans to attend Oakley’s funeral, which took place at Cullendale First Baptist Church in Camden, Arkansas in their uniforms.

CNN report that dozens of members of the Arkansas National Guard answered their call in spectacular fashion.

I feel like I should title this post “A CRAZY Day and Nothing Was Accomplished!”??‍♀️??‍♀️Oakley did not receive his…

Posted by Prayers for Oakley Nimmo on Monday, 8 April 2019

Oakley was diagnosed with neuroblastoma in 2015, according to a GoFundMe Page set up in his honor. He fought bravely, and was declared cancer-free in June 2017 after several rounds of chemotherapy, surgeries, and a stem cell transplant.

Just one month later, however, doctors discovered a swollen lymph node. Scans revealed that the cancer had returned.

Oakley resumed his fight, showing determined bravery in the face of this terrible disease. Not only that, but all the while he was fighting, he still found time to do what he enjoyed most: pretend he was a soldier.

“In between hospital stays, Oakley spent his free time driving his power wheels and shooting his toy guns,” his obituary reads.

“He often talked of being an ‘Army Man’, as he called it, when he grew up.”

It was with that in mind that parents Shelby and Colton Nimmo knew they had to make his funeral a reflection of his greatest passion.

They sent out a plea for any active military members and veterans to attend the funeral in their uniforms. Their aim was to pay tribute to their little boy, who had more than proved himself a soldier as he waged war on cancer at such a young age.

In that respect, they were certainly successful.

The Arkansas National Guard even promoted Oakley to the rank of “Honorary Colonel”, according to a Facebook post.

The post reads: “On behalf of the men and women of the Arkansas National Guard, rest in peace little buddy. To River’s family, you’re in our thoughts and prayers.”

We’re sending our prayers and thoughts to Oakley’s family at this most difficult of times.

Share this article if you, too, want to send your prayers.