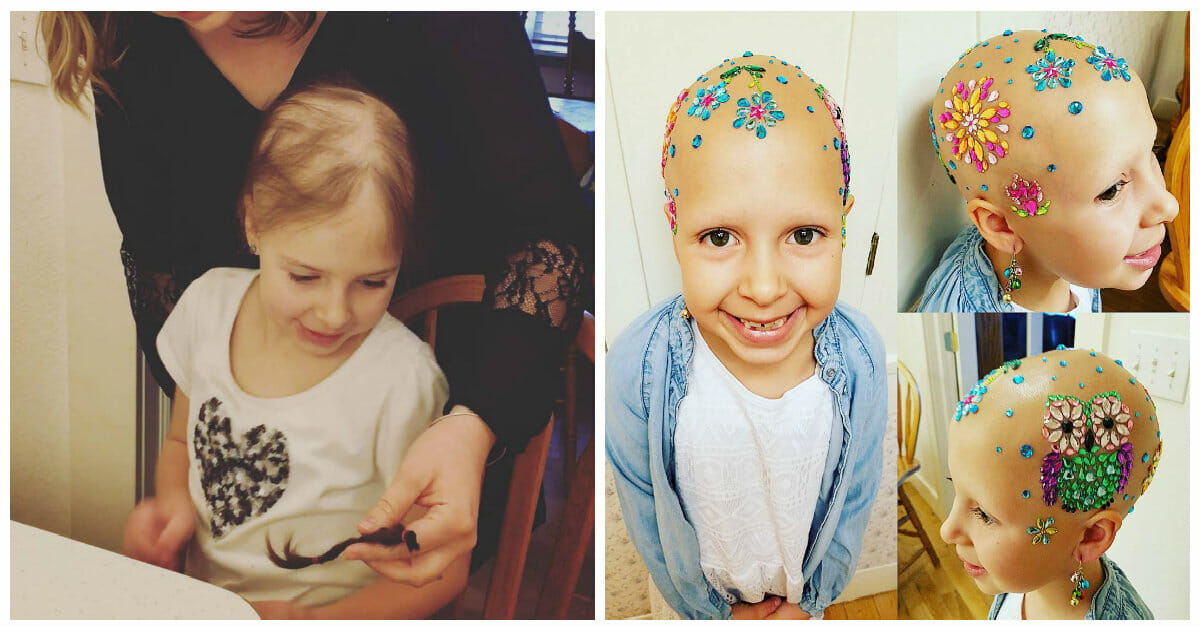 Most people think a lot about their hair. It can become a big part of your image and self-identity that going bald is a big fear for a lot of people.

But one little girl is proving you don’t need hair to be beautiful or to express yourself, and how to not let adversity keep you from shining.

At the beginning of 2017, Gianessa Wride was an ordinary 7-year-old in first grade. But all of a sudden, she started losing her long brown hair for seemingly no reason, beginning on New Years Day.

“I was brushing Gianessa’s hair, and it just fell out,”’ her mom Daniella Vinanti Wride told Yahoo Beauty. “Then I noticed a quarter-sized bald spot on her head.”

Doctors diagnosed Gianessa with alopecia, an autoimmune disease that causes irreversible hair loss all over the body.

Hey everyone, so we went to the doctors for Gianessa today. She has been diagnosed with alopecia areata. It is an auto-immune disease. She had the stomach flu about 1 1/2 weeks before she started losing her hair. The doc said that her body wanted ao badly to fight that virus that it got a little to excited and created antibodies again her hair as well. He said that the pattern in which her hair is falling out, mainly referring to along the hairline in front by her forehead, means she may not ever really grow it back. Also, she has had eczema, which apparently is linked in some way, but I need to look more into that. There is no cure or medication she can take. They can do pill steroids, but once she stops taking them the hair falls out again. Also, they can do steroid injections into the scalp. Neither of these options sits well with Tyler and I so for now we will embrace her new fabulous look. Her asthma has been acting up lately and he immplied that she maybe allergic to dogs or cats or something else now. And if her asthma acts up it sends signals to her body to try and fight something, which in turn aggravates the hair loss. She is still her beautiful, sassy, smart, loving, kind self. And I'm excited to embrace this and have fun trying new things with her. This girl is fierce and brave, way more so than I could have ever imagined. I love her more than anything. #alopecia #alopeciaareata #brave #baldisbeautiful #nohairdontcare #youthinkyourehavingabadhairday

Our alopecia journey began 1.1.2017 and just 21 days later she made up her mind to cut off the rest. We braided what was left and she took the scissors to it and she chopped it off. She was brave enough. She took control. She is such a warrior! #alopeciaawareness #alopecia #nohairdontcare #baldisbeautiful #cut #cutitoff #brave #beautiful #warrior #unicorn #unique #enjoythewride

In an Instagram post, Daniella explained that the alopecia was likely triggered by a recent stomach flu. There is no cure for the condition, and while the mom mentioned that there were treatments involving steroid injections, the family opted against them and decided to just “embrace her new fabulous look.”

But of course, it wasn’t an easy adjustment. Both Gianessa and her mom were saddened by the challenges she would face.

“It was upsetting to her,” Daniella told People. “It was hard for me as well, but not because of what she looks like. I was more upset thinking that somebody might bully my daughter and I didn’t want her to ever feel less beautiful than she is.”

January 1, 2017 I found Gianessa's first patch while brushing her hair after bath time. It just kept coming out into her hair brush. Fast forward 21 days and 90% had already fallen out before we could get into a dermatologist. I felt so helpless and at such a loss. Trying to explain this to a then 7 year old was difficult. But Gianessa being who she is was bright and optimistic. #alopeciaawareness #alopecia #baldisbeautiful #unicorn #brave #beautiful #gianessa #enjoythewride #hair #nohairdontcare

Still, Gianessa kept a brave face and let the rest of her hair go. Wigs and headscarves didn’t suit her, so she ended up rocking her natural bald look.

“She is still her beautiful, sassy, smart, loving, kind self,” Daniella wrote on Instagram. “And I’m excited to embrace this and have fun trying new things with her.”

But then the chance to really embrace the beauty of her new appearance came from the most unexpected place: a “Craziest Hair Competition” for her school’s Spirit Week.

Sure, Gianessa could’ve worn some kind of wacky wig for the school event, but she had something different in mind: to make her bald head sparkle and shine. Always a fan of glitter and sparkly things, she adorned her head in adhesive jewels.

“She looked in the mirror and said, ‘Mom, this is awesome!’” Daniella told Yahoo. “Her friends loved it too.”

Gianessa looked stunning. And while she was a little worried that her fellow first graders would make fun of her look, she was a big hit… and won first place in the Crazy Hair Day contest!

It was a moment that really helped the girl regain her self-confidence and see all the beautiful potential of her baldness.

“I was sad at first when I lost all my hair, but now I love being bald,” she told People. “I can do things to my head that other kids can’t. I’m thinking now it might be fun to decorate my head with some sparkly butterflies and flowers.”

How freaking amazing is this?! You guys, @dyehard_henna is freaking phenomenal! Nessa was stoked to have her head done today. This henna looks so cute! #alopecia #alopeciaawareness #princess #princesscrown #henna #hennatatto #warrior #beautiful #enjoythewride

Gianessa, who hopes to become a fashion designer one day, has since been decorating her head up in fun and creative ways, and mom posts them on Instagram. She’s thrilled that her daughter has become a role model for kids with hair loss.

“People feel inspired by her, and that’s wonderful,” Daniella said. “We’re hopeful that she’ll show other bald kids that they can also embrace their baldness and can rock any look they want, in any way they can.”

No trip is complete without a photoshoot with Papa. #alopecia #warrior #alopeciaareata #brave #princess #baldisbeautiful #youthinkyourehavingabadhairday

Photo 1 of 2: Nessa LOVES to see other bald girls/woman that are just like her. So for fun we painted her like Nebula today. Thank you @karengillanofficial for rockin' this look and inspiring her. It means a lot to this mama. #guardiansofthegalaxy #Nebula #alopecia #baldisbeautiful #alopeciaawareness #brave #beautiful #paint #fun #youthinkyourehavingabadhairday @karengillanofficial @prattprattpratt @zoesaldana @davebautista @pomin8r @jamesgunn

Bald really is beautiful! It is so inspiring to see someone so young have the wisdom to make the best of their situation and embrace their unique beauty.