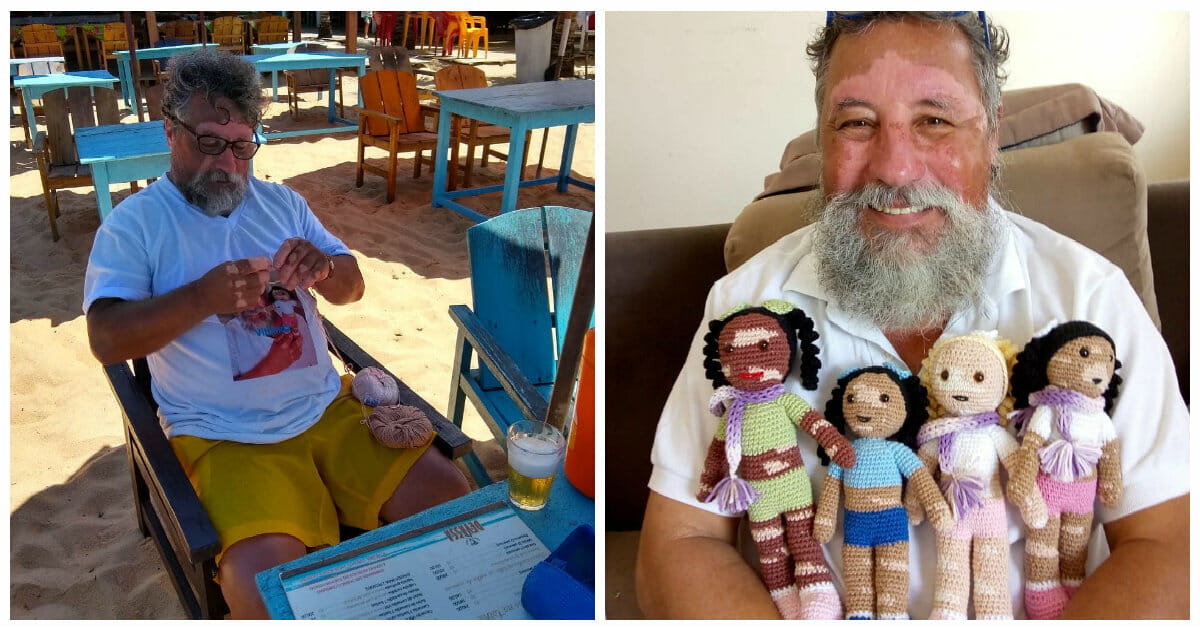 Inclusivity and representation are important, especially for young kids. Growing up seeing people who look like you can be hugely beneficial for your self-esteem.

Sadly, some kids don’t have many opportunities to see a reflection of themselves in the world, like children with physical conditions that aren’t often depicted.

But one kindhearted grandfather has made it his mission to make sure these kids do feel included… by making custom dolls that look just like them.

João Stanganelli Junior, a 64-year-old from Brazil, has a skin condition known as vitiligo, which is characterized by blotches of skin lacking pigmentation, giving sufferers a “multicolored” skin coloring.

People with vitiligo can be self-conscious about their appearance: studies have shown that about half of people with the condition have suffered from anxiety or depression because of it.

But João has come to terms with the condition since it first appeared in his 30s: “The spots I have are beautiful,” he told CTV. “What hurts me are the flaws in peoples’ characters.”

He’s also semi-retired from his job and needed a new project to fill some of his time. He also wanted to give something to his granddaughter, so one day she’d have something to remember him by.

His solution came when his wife suggested taking up crocheting. While it was a challenge at first, he soon got used to the craft and became hooked: “At first my fingers and back hurt a lot, today no more,” he told Bored Panda.

It only took a few days of learning before he was able to make a doll for his granddaughter.

But it was no ordinary doll: he decided to make it special and personal by giving the doll vitiligo, with similar facial markings he has.

It was a special gift for his granddaughter… but it soon turned into something else entirely once people caught on after photos were shared online.

Seeing the skin condition depicted on a doll moved people—it turns out, there was a demand for representation like this, and people began sending requests for dolls. Joao was happy to oblige.

There were requests for other dolls with vitiligo:

He even made a doll in a crochet wheelchair:

Response to the dolls has been great. Joao told Bored Panda that people said the dolls were “helping with their self-esteem.”

“[I’m] amazed by people asking for dolls,” he said, adding that he felt “gratitude for the varied responses of adults and children.”

It’s a great idea—a small act of kindness that can really make a huge difference in these kids’ lives and boost their self-esteem. Share this inspiring story!