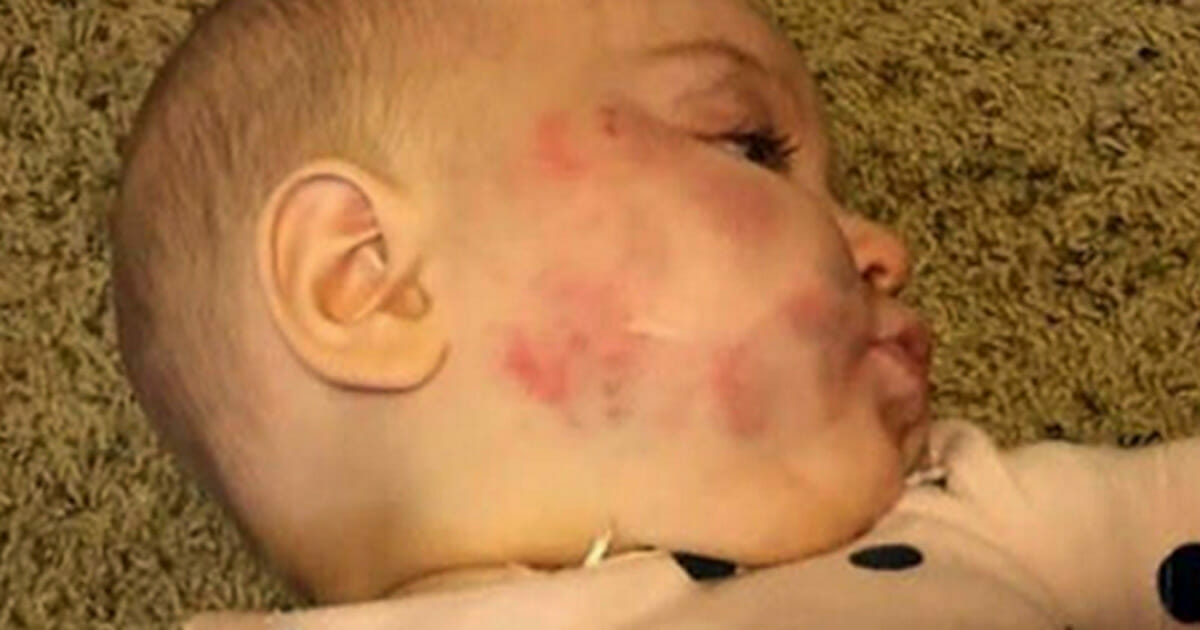 When we leave our children in preschool, we often do so because we have great confidence in the staff. Our children are our most valuable possessions, and parents will go to great lengths to ensure no harm ever comes to them.

For one mother, however, a normal day became a nightmare after she’d dropped her daughter off at preschool for the day.

It was almost two years ago that Tracy Blinov left her then seven-month-old daughter, Eliana, at the Busy Hands preschool in Montana, USA, on her way to work.

It wasn’t long before she received a call, though … and it turned out to be one she’ll never forget.

It transpired that Eliana had been bitten, and so Tracy turned her car around and went straight back to the preschool.

When she arrived, she was met with a truly shocking sight.

Eliana hadn’t just been bitten once; her face was covered in bite marks caused by an older child.

That a child might bite another is not altogether that disturbing, nor uncommon. After all, they’re learning the ways of the world and some take a little longer to distinguish between what’s acceptable and what isn’t. Tracy’s problem lay in the fact that her baby had been bitten multiple times, and apparently without the staff intervening.

After watching surveillance footage from the preschool, it could be determined that Eliana had been bitten for almost half a minute before one of the staff members came to the rescue.

It resulted in over ten bite marks on Eliana’s face and body.

An investigation was launched to find out just why it took so long for the staff to respond, though the preschool claimed they acted as soon as they heard Eliana’s screams.

I don't get it. I never will. Who let's this kind of thing happen? I Let Eliana go to Busy Hands, and in less than 2…

The two-year-old guilty of the attack had only just started at the preschool. What’s more, the same child had been removed from another preschool as a result of biting a fellow kid. His mother, however, chose not to share that with the Busy Hands preschool.

“If that would have been told to us, we could have said ‘No, we can’t take her.’”

The bites were so severe that Eliana had to take antibiotics. However, the little girl, despite having a face full of bruises, was in a good mood mere days after the event.

Update on baby Eliana for those following.Last night she was evaluated by a doctor and is on antibiotics as a…

Tracy opens up on the incident:

“She’s in much better spirits today. I’m happy to say the bruising and swelling is coming down a little, it’s amazing how resilient babies are. So blown away by the support from everybody. ABC Fox Montana and KPAX will both be featuring stories on our sweet girl.”

She's in much better spirits today. I'm happy to say the bruising and swelling is coming down a little, it's amazing how…

Montana law says there must be a maximum of four toddlers to one adult at a daycare.

Following Eliana’s attack, however, Busy Hands has announced that their goal is to reduce that to two children per employee, in a bid to ensure nothing like it ever happens again.

Obviously, when we leave our children for the day we expect them to be well looked after; we trust that nothing bad will happen to them.

Anyone who has ever had a child will know all it takes is to turn away for a second for an accident to occur, though.

If it took one and a half minutes for Eliana to get the help she so desperately needed, it looks like that daycare needs to seriously amend its methods of practise. Of course, the child’s mom should have mentioned the previous biting incident when inducting her, as well.

I hope Eliana’s parents aren’t too afraid to leave her at daycare again, and that Busy Hands rearrange their way of doing things so that no children are left unattended in the future.

Share this article with your friends and family on Facebook if you think daycare should be given more money with which to hire more staff.