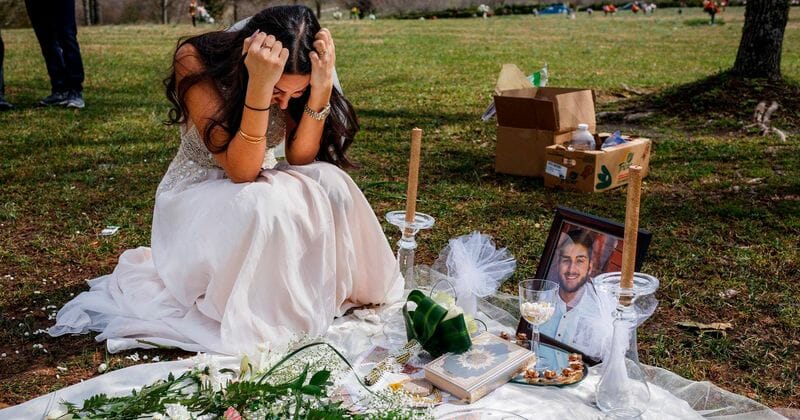 Many women dream of their wedding day from an early age. I know I sure did.

For me, it was forever looked upon as the chance to be a princess for a day. To dress up in white, command the attention of every eye in the church, and promise myself eternally to the one I truly loved.

I, like many others, had envisaged every minute detail in my head one hundred times over. I’d done the walk in my head, I’d seen the bouquets of beautiful flowers and my loved ones gathered to see me married.

Sara Baluch had done the very same when she was to be wed. Her big day had been playing through her mind, too, along with different scenarios and quirks that she could only hope to anticipate.

In no instance whatsoever, though, did she imagine she wouldn’t be walking to meet her husband-to-be at an altar, but rather at his grave.

March 9 was supposed to be the day Sarah Buluch and her fiance, Mohamed Sharifi, were to be married. Instead, Sarah found herself planning a trip to his grave.

As per the Times Free Press, just two weeks before the couple were to tie the knot, 24-year-old Sharifi met with a stranger to sell his Xbox One in the parking lot of a Hixson Pike apartment complex.

White was arrested and charged with criminal homicide days after shooting Sharifi dead and robbing him.

Sara was left heartbroken. The love of her life had been cruelly taken from her, his life ended for something as trivial as a gaming system.

Still, she was resolute in her stance that she would spend the day they had planned together by his side. Despite her plans initially being spoiled by heavy rain, Sara made the long walk up to Mohamad’s grave a day later, on March 10. She dressed as she had always intended to: in wedding dress and veil.

Unable to fight back her tears, Sara sobbed: “We were supposed to be together. I’m so sorry, Mohammad. I’m so sorry. So sorry.”

Speaking to the Times Free Press on her and Mohammad’s relationship, Sara explained how it had been a fairytale one, one epitomized by Mohammad’s determination to convince Sara to go out with him.

“I know this sounds like a movie and that it can’t be true, but that night, I knew he was it. And so did he!” she said.

“When you came to him with a problem, it became his problem. He would sit there and try to tell you how you can fix it. He wouldn’t just sit there and be like, ‘Oh, I’m sorry’.”

Sara was the first person to arrive at the hospital on the day Mohammad was shot. She recalled how she knew something was immediately wrong when hospital staff informed her he wasn’t in the system. She was soon sat down by a nurse and told the inconceivable truth.

“And then the nurse came in. She sat down next to me,” she explained.

“She held my hand, and she said, ‘I’m so sorry. He was shot. He didn’t make it.’ It was like the world was ripped from underneath me. It felt like I was falling and it wasn’t stopping. I fainted. When I woke up, I was like, ‘No. This is a dream. We were getting married in two weeks. I just saw him last night. I just saw him’.”

The world can be a bitterly cruel place sometimes, and one made all the more cruel by the unpredictable and downright appalling behavior of the people in it. Sara should have married her soulmate, should have looked forward to a life of peace and love.

Instead, a young life was needlessly lost and now Sara must live her life in grief.

Share this article to remind others of the fragility of life and to never take it for granted. Rest in peace, Mohammad.