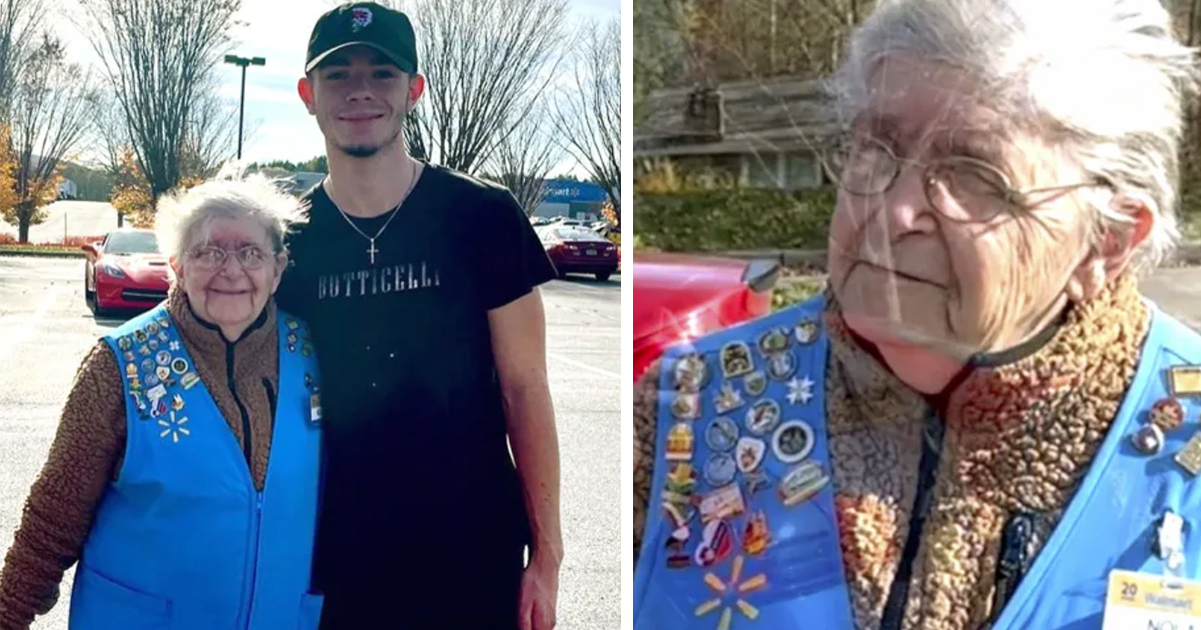 We’re all taught as youngsters to help people who are perhaps less fortunate than ourselves.

Doing nice things for people and making gestures to improve their lives should be part and parcel of modern day society. Sadly, the concept of charity and giving to others when you have an excess is something that appears to have been on a steady decline over the years.

It is not entirely dead, though. Not yet.

No, every once in a while we stumble across a story like this one, that perfectly demonstrates the beauty found in going above and beyond for strangers in need.

As per reports, Devan Bonagura from New Jersey took notice of an older woman who worked at his local Walmart store.

Given her advanced years, he simply couldn’t understand why she was still working and not enjoying her retirement. Ultimately, he decided to lend a helping hand that would send waves across the internet.

Devan began by sharing a short, 15-second video to TikTok, showing an old lady siting at the break room table at the Walmart in Hackettstown, New Jersey, in the middle of her shift.

The video quickly became a hit – as of November 28, it had amassed 30.8 million views and over 4.6 million reactions.

The old lady was 81-year-old Nola Carpenter, a resident of New Jersey who had worked at the same Walmart store for over 20 years.

As mentioned, the 15-second clip Devan uploaded to TikTok, accompanied by the text “Life shouldn’t b this hard …” struck a chord online. Many viewers sympathized with Nola, while others expressed shock that she was still having to work despite being 81.

After the video’s response, Devan decided he needed to see if more could be done to help her.

Upon learning that Nola was working to earn enough money to pay off her mortgage – this on a wage of somewhere between $17-$19 an hour – Devan created a fundraiser for the 81-year-old with the title: “Let’s help Nola retire.”

“Nola works at Walmart and that says enough. Let’s all come together and help,” the caption read.

Incredibly, the store manager contacted Devan and demanded he delete both the video and the fundraiser for Nola, claiming his business was being threatened as a result and threatening to involve the cops.

Devan responded by sticking to his guns. He said: “I told them to do what you have to do because I’m getting this money to this woman one way or another.”

Fast forward to a video posted on November 5, and Devan paid a surprise visit on Nola. After talking with her for a time, he transferred $110,000 raised through the fundraiser into her account.

When the 81-year-old explained that she was going to have to work to make up the additional $60,000 left on her mortgage, Devan decided to leave the GoFundMe page live until it reached a sum in excess of $186,000.

“I feel good, and I’m thankful for Devan for what he’s done, or none of this would have been possible,” said Carpenter, who could finally afford to retire.

Nola, who expressed sadness over the thought of missing her regular customers, confirmed she would continue working during the upcoming holiday season, before retiring at the beginning of 2023.

What an inspirational young man Devan truly is!

We’re so happy that Nola doesn’t have to worry about working anymore and can retire in peace.

Please, share this article online if it put a smile on your face. I think we can all agree that the world needs more people like Devan.