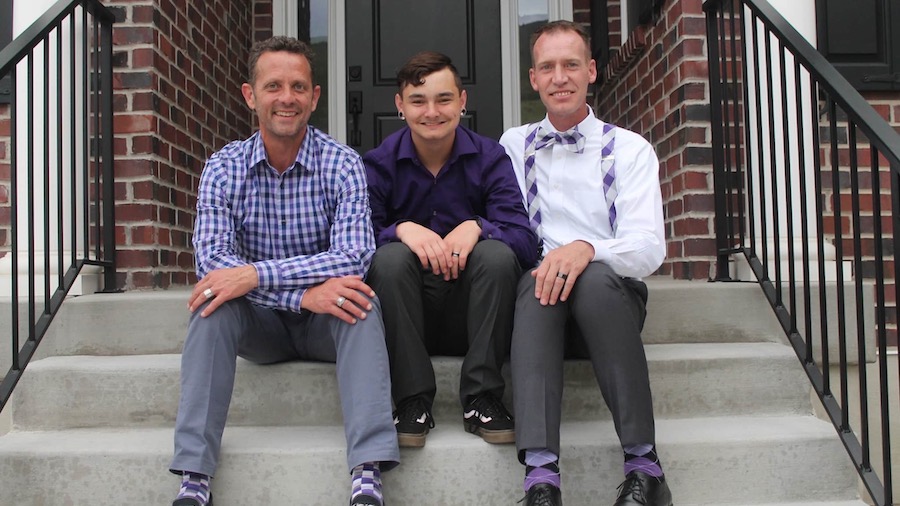 It took 5,449 days, but an 18-year-old named Austin has finally been adopted from foster care in Farmington, Utah.

According to reports, the teenager had waited almost fifteen years to find his forever family, and did so thanks to his two new dads, Jonathan and Kyle.

Austin explained: “Jonathan is programmed on my phone as Dad and Kyle is programmed as Pops. Because I was like, what’s another name other than dad one and dad two?

With Austin approaching his 18th birthday – a time when many kids age out of foster care – he was worried he might never be adopted.

Yet Kyle happened to be watching one day when a story aired about Austin’s search for as loving home.

“I just watched and listened to his story, and the one thing that caught me was when he said, ‘I just want a forever family,’” said Kyle.

“So, I told Jonathan, You need to call his caseworker.’ And the next day he did.”

Given that Kyle and Jonathan had experience in fostering, the process of bringing Austin in was made simpler. The teen spent weekends with the pair and before long it became evident that they were destined to be a family.

“We would take him back to the home he was in after the weekend, and we would come home and it was quiet. And we would sit here, and it was like something is missing,” Kyle explained.

Of the adoption itself, Jonathan said: “It came very fast; faster than we expected it to. He moved in in April, we kept him in his school and commuted him until he finished, then at the beginning of this last year was his senior year, so we got him enrolled in a Davis County school.”

Proving that they have hearts of gold, Kyle and Jonathan helped Austin to graduate high school and enroll in college. In January of 2020, the three officially became a family.

“Once it got to about a week out from my birthday and they had gotten their attorney and everything else finalized, up to going into the courtroom, it was really that week when I realized: This is actually happening” Austin said. “That’s something I really never thought I would see.”

Kyle said: “We’ve told him: ‘You’re going to leave one day and be out on your own. That doesn’t mean you can’t ever come back. This is home; this will always be your home.

“You are welcome here no matter what. We will always be there for you.”

Wow! Thank you, Kyle and Jonathan, for doing what few people would in giving this teenager a loving family. I’m sure Austin is delighted that he’ll now have a forever home!

Share his article if you’re happy Austin got adopted … and to praise the goodwill and compassion of Kyle and Jonathan.