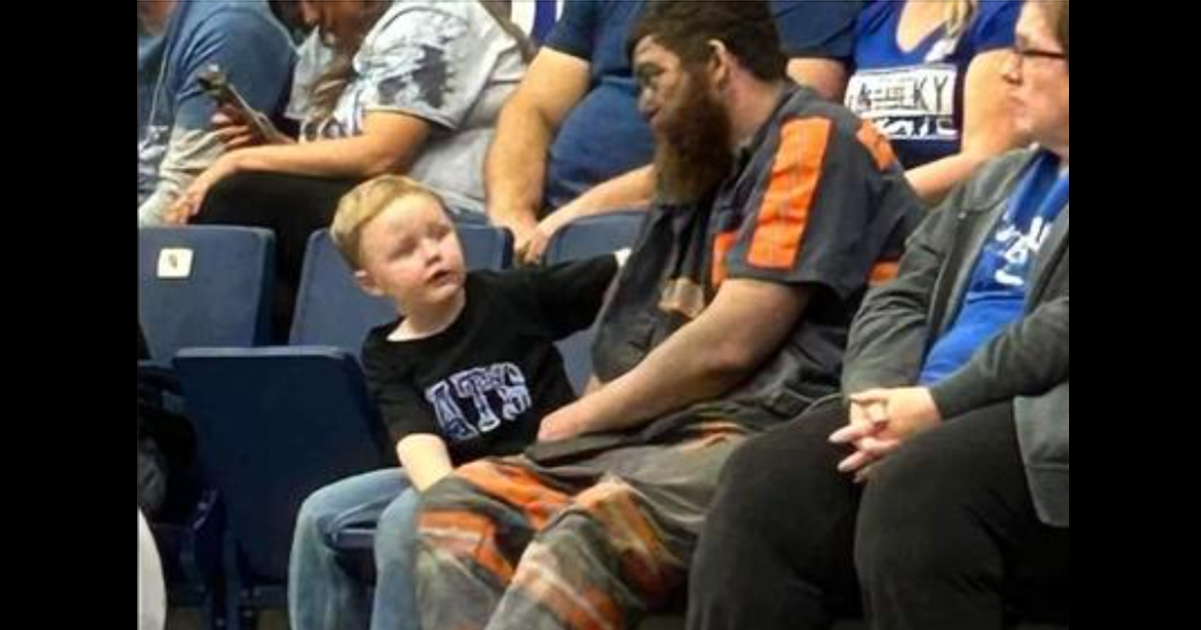 Humility is an often under-appreciated virtue in society – far too often do we see people judging others for their appearance, place of work, or the size of their house.

It should go without saying that all of us deserve to be treated with respect, no matter what path our lives have taken.

Every so often, we see a photo or video going viral on the internet for all the right reasons, reminding us of the power of positivity as it pertains to millions of people coming together.

This week, one such picture, taken at the weekend’s University of Kentucky Blue-White basketball game, got the viral treatment, and we simply can’t get enough …

The photo in question shows a coal miner father who rushed straight from the job on Saturday to watch the game at the Appalachian Wireless Arena with his son.

Someone else in the crowd snapped a picture of the dad and uploaded it to the internet, where it caught the subsequent attention of UK Head Basketball Coach John Calipari.

“My family’s American dream started in a Clarksburg, WV coal mine, so this picture hits home,” John said.

“From what I’ve been told, after his shift, he raced to be with his son & watch our team. Don’t know who this is, but I have tickets for him & his family at Rupp to be treated as VIPs!!“

It didn’t take long at all the identify the man in the coal-stained work attire as Michael McGuire, from Pikeville, Kentucky.

When interviewed, he revealed that he only had 45 minutes to get himself from work to the game, and wasn’t willing to miss any of his son Easton’s first basketball experience.

“It was either go straight there, or miss half the game to go home and take a shower and everything,” Michael said.

As per reports, Michael was on shift working deep underground while his photo was going viral online thanks to Coach Calipari.

Michael added: “When I got out and got service on my way home, it went crazy…I couldn’t believe that it was real.”

Michael and the coach were able to have a conversation on Monday evening, with the latter officially offering the VIP experience he had promised earlier in his post.

In a later tweet, Coach Calipari praised the fans of Big Blue Nation for their help in identifying Michael.

Calipari tweeted: “Thank you everyone for your incredible response to this. No one rallies like the BBN!”

He added: “I’ve also had the privilege to go underground with miners in KY and a comment stuck out to me: “We go down together and we come up together.” They work for each other. The ultimate teammates!!”

I think this photo of Michael and Easton so perfectly summarizes the father-son bond.

Please, share this article so that more people can see this amazing picture. And leave a comment if you, too, thought Michael’s decision to go straight to the game was heartwarming.