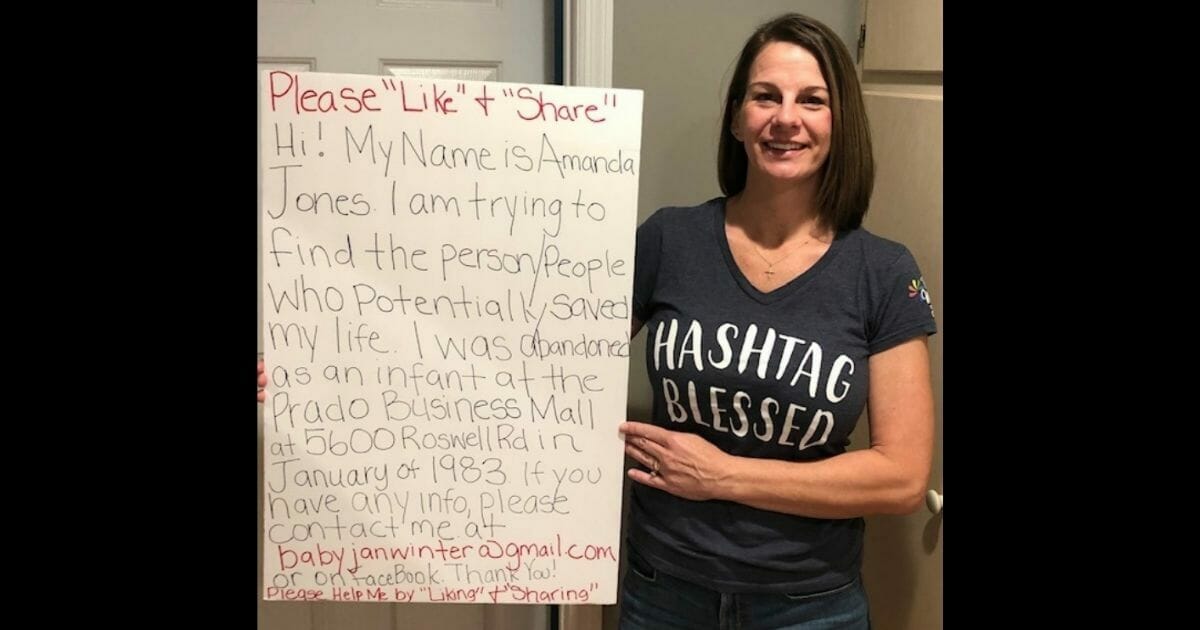 When I think back to my childhood, I recognize that I was truly blessed to grow up in a home with a loving family.

I had a stable upbringing, I was showered with positivity, and I wanted for nothing. I was, in short, blessed.

Of course, I realize not everyone has such benefits. Some people are born into struggle and strife, some are depraved of the love and care they deserve. Some are even abandoned, discarded as though they were a piece of litter.

Amanda Jo Jones was one such baby. Back in 1983, she was dumped like garbage in a business mall in Atlanta, Georgia. Fortunately, she was discovered and ultimately saved, but to this day she’s never been able to answer many of the questions that would help decode her earliest beginnings.

Now 36, and with children of her own, Amanda is seeking answers she hasn’t been able to find through various routes.

It was in June of this year that Amanda saw a news story that stirred something deep inside her. It concerned a newborn baby that had been placed in a bag and discarded in the woods like garbage.

The baby was ultimately rescued, and a number of potential families stepped forward with offers to adopt her. Still, Amanda couldn’t help but draw parallels with her own story.

“I saw that baby on TV and wished I could adopt her,” she said to Yahoo Lifestyle. “One less child would grow up feeling abandoned.”

Despite being married and having children of her own, Amanda remains on a mission to learn as much as possible about her past.

It was early on that she began to understand the woman raising her wasn’t her birth mother. She was named Jan Winter by nurses at Northside Hospital, for the month and season in which she was found. A set of foster parents then changed her name to Crystal Alicia Fairchild. She was later adopted by Kay and Wayne, however, who endeavoured to give her a normal childhood.

“My mom read me a book called ‘The Adopted Family’ and she shared bits of information,” Amanda explained. “I kept asking questions and by the time I was 6, I understood that my mom didn’t birth me.”

And so Amanda has pursued answers, sadly to little avail. Earlier in 2019, she turned to DNA tests to try and source more blood relatives. Ultimately she hit a wall, explaining in a post on Facebook that she would “respect the privacy of those involved who wish not to communicate.”

“I still forgive them,” she says, “and hope some day that they reach out to me and heal from all the secrets and pain.

“I cannot imagine how carrying a 36-year-old big secret affects someone mentally and physically.”

So now she’s turning to the power of social media. Amanda is hoping to circulate her message around Facebook, in the hope that she can find the person who rescued her from the dumpster almost four decades ago.

Her post reads: “Hi! My name is Amanda Jones. I am trying to find the person/people who potentially saved my life.

“I was abandoned as an infant at the Prado Business Mall at 5600 Roswell Rd (in Atlanta/Sandy Springs, GA) in January of 1983. If you have any information, please contact me at [email protected] or on FaceBook. Thank You!!!”

“I want to thank whoever found me because they changed so many lives by being in the right place at the right time. I would like a first-hand account of what happened because it would brighten my life. I’m hoping one person reads this and says, ‘Oh my gosh, there she is!’”

Let’s help circulate Amanda’s message in the hope of aiding her in the quest for answers.