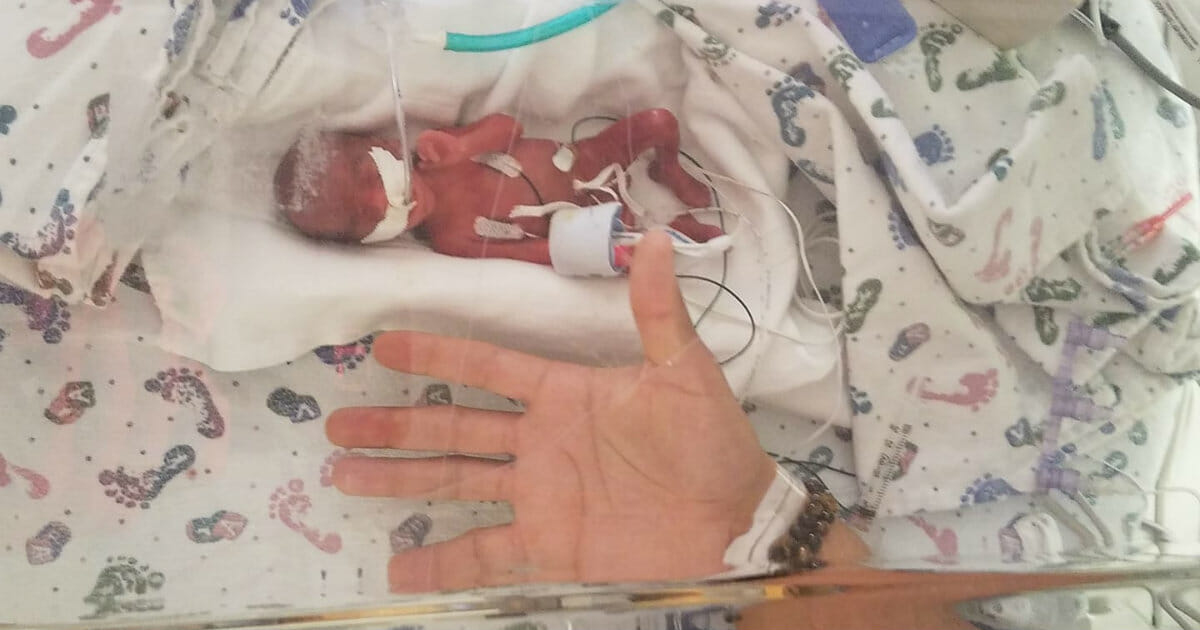 Over one-in-ten babies in the world are born premature every year, and very early births, arriving weeks or even months before a woman’s due date, can lead to serious medical problems, disabilities and death, as the child has not had the proper time to develop in the womb.

Recently one baby was born extremely premature—but with the help of his loving family, he’s miraculously surviving.

Ellonn Smartt and her partner Jordan Morrow were expecting a son, who was due in November, KMBC reported.

But on July 11, Smartt’s water broke… four months early, and only just over 23 weeks into her pregnancy. She was rushed to Blank Children’s Hospital, where doctors performed an emergency c-section.

The World Health Organization says that anything less than 28 weeks is defined as “extremely preterm.” Most babies in this stage of development are unable to breathe on their own or use their limbs.

Luckily, this baby—little Jaden Wesley Morrow—was a fighter, and relieved everyone when he came out screaming and flailing his arms. Against all odds, he survived the birth.

He was, however, incredibly small: a mere 13 ounces, less than a pound. He was smaller than an adult hand:

After an emergency C-Section.. HE MADE IT! Everything is looking great! Heartbeat, blood pressure,lungs are strong ??….

Doctors told the new parents that Jaden was the smallest baby born in the hospital in a decade. They described him as a “miracle baby.”

“I’m already wowing the Doctors,” the parents wrote in Jaden’s voice on their GoFundMe page. “I’ve heard them use terms like ‘amazing’ and ‘remarkable’ to describe me so far – not bad for someone under 1 pound, huh?” The page has raised $5,000 for the family, doubling their initial goal. The money will go towards medical bills as well as gas money to and from the hospital.

According to Morrow, the baby’s heartbeat, blood pressure and lungs were strong. At two days old, he was able to drink his mother’s breast milk.

Despite the frightening ordeal, the parents are moving forward, happy that their son is hanging on:

“I’m so proud of him, Smartt told KMBC. “I go in and talk to him, and I tell him that I’m proud of him every day.”

It’s still an uphill battle. As Jaden continues to get the care he needs, he will likely be in the NICU until his original due date, November.

“We have a long way to go,” Smartt said.

The important thing is that Jaden survived and is doing better than anyone could’ve expected. His mom, meanwhile, says that it’s all just happening for a reason:

“It taught me there’s always a plan, and we learned to be patient,” Smartt told KMBC. “Jaden is here, and that’s all that matters.”

Keep this family in your thoughts and prayers as they get through this! Share their incredible story!