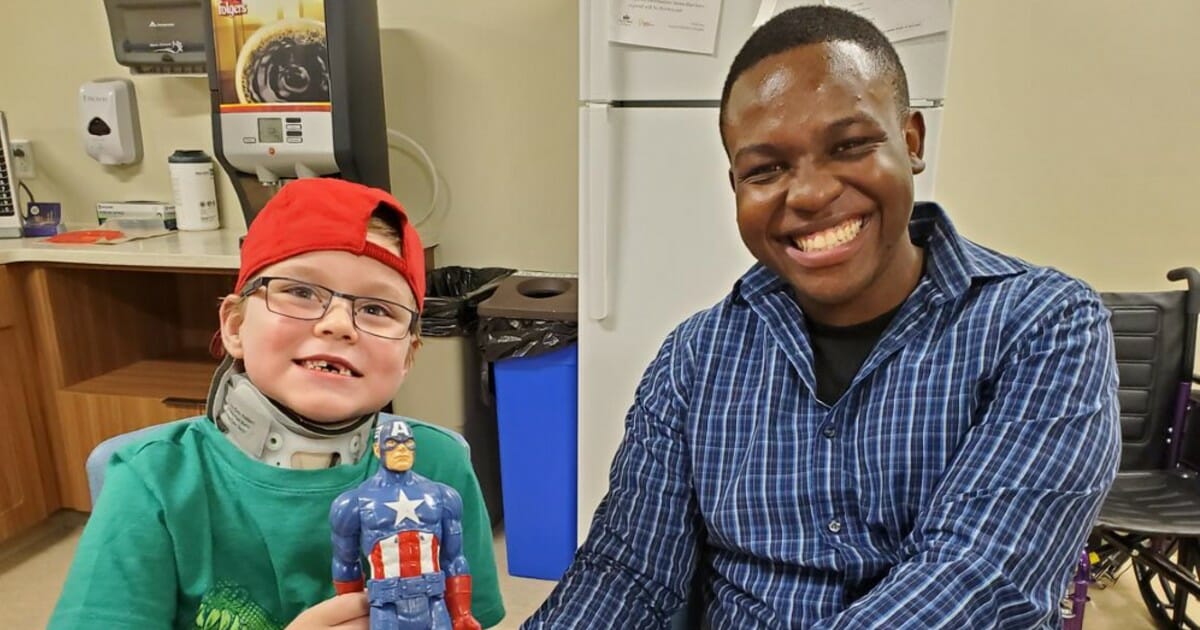 On March 23, Branden Devine, his older brother, Jason, and their father, Christopher, were involved in a crash in Fargo, North Dakota. The two-vehicle crash resulted in the death of 7-year-old Jason and Christopher’s arrest on the suspicion of DUI with a minor in the vehicle and DUI resulting in serious injury.

Five-year-old Branden survived and his survival is partially thanks to Jean Pierre, a quick-thinking nurse, who was in the right spot at the right time.

“I am a nurse; it comes with the career — you have a split second to do something and you do it,” Pierre, who is a nursing home nurse, told InForum.

According to InForum, Branden was placed on life support at Sanford Medical Center, but after a long month of treatments he has made a remarkable recovery.

After weeks of recovery, a Fargo boy who was critically injured in a crash that killed his brother met the nurse who saved his life.

Recently, the five-year-old had a very special visitor, the man who saved his life.

When Pierre entered the room the two embraced, as Branden’s mother, Kristin Sande, watched and tears filled her eyes.

“You have no idea — you saved my little boy. Thank you so much,” Sande told Pierre. “It is amazing, it really is. You are an angel on earth, and I really mean that.”

The moment was life-changing for everyone involved. Pierre shared that playing a part in Branden’s survival has changed his life.

“When you get to see someone go through this and live another day, that is what it is for,” Pierre said. “I have decided to take my career a step further. I am transitioning into emergency medicine… that moment changed not just him but me.”

Jean Pierre was just doing his job, but in doing so he saved a boy’s life. As a result, he decided to further his career and explore a different area of medicine.

Pass this article and thank Jean for his actions and wish him luck on his new career path.