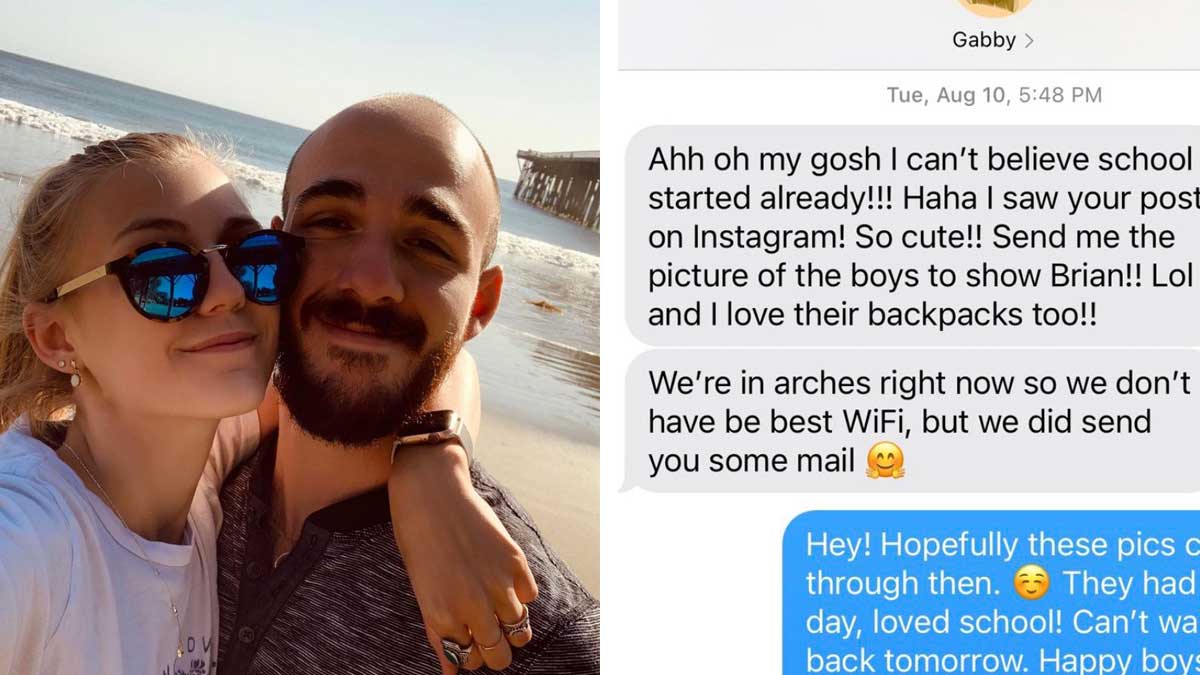 Brian Laundrie’s sister has revealed the last text message she received from Gabby Petito before she went missing.

Following Cassie Laundrie’s interview with Good Morning America images were shared of postcards that she received from her brother’s fiancée Gabby Petito, which included the last text message exchange she had.

The 22-year-old from Long Island was on a trip with fiancée Brian Laundrie and was last known to be in Wyoming’s Grand Teton National Park. Her family reported her missing on September 11 after not hearing from her in 13 days.

The FBI said Sunday that remains “consistent with the description” of Gabby had been uncovered in Bridger-Teton National Forest in Wyoming.

Brian is the person of interest in the case, but has been missing since Tuesday, his family says. His parents reported him missing on September 17 after Brian told them he was going to hike alone in the 24,000-acre Carlton Reserve wilderness area, near North Port, Florida.

Laundrie’s sister Cassie shared one of her last text messages with Gabby in which she expressed her excitement that school had started for Cassie’s children.

“Ahh oh my gosh I can’t believe school started already,” Gabby wrote, “Haha I saw your post on Instagram! So cute!! Send me the picture of the boys to show Brian!! Lol and I love their backpacks too!! We’re in [Arches National Park in Utah] right now so we don’t have be best WiFi [sic], but we did send you some mail.”

Cassie also shared postcards from Gabby in which she writes about their travels together and she released a statement as per ABC News, saying: “Right now my husband and I would like to express our condolences and prayers to the Petito family. Gabby was a fun and loving influence to ‘the boys’ as she always referred to them. We will cherish all the time spent with her.”

Laundrie’s whereabouts are currently unknown. Officers initally called off the search in the reserve, saying they’d “exhausted all avenues in searching the grounds.”

But on Tuesday, officials resumed the search in the “gator and snake infested” swamp.

Meanwhile a search warrant has been carried out at the Laundrie home and results of an autopsy will determine the identity and cause of death of the body found in Wyoming.

Brian’s lack of cooperation throughout this case has only added to the heartache Gabby’s family is experiencing. They are enduring their worst nightmare and my heart goes out to them.

I can only hope that Brian does the right thing and helps to bring some kind of closure to all those affected by this case. Please share.