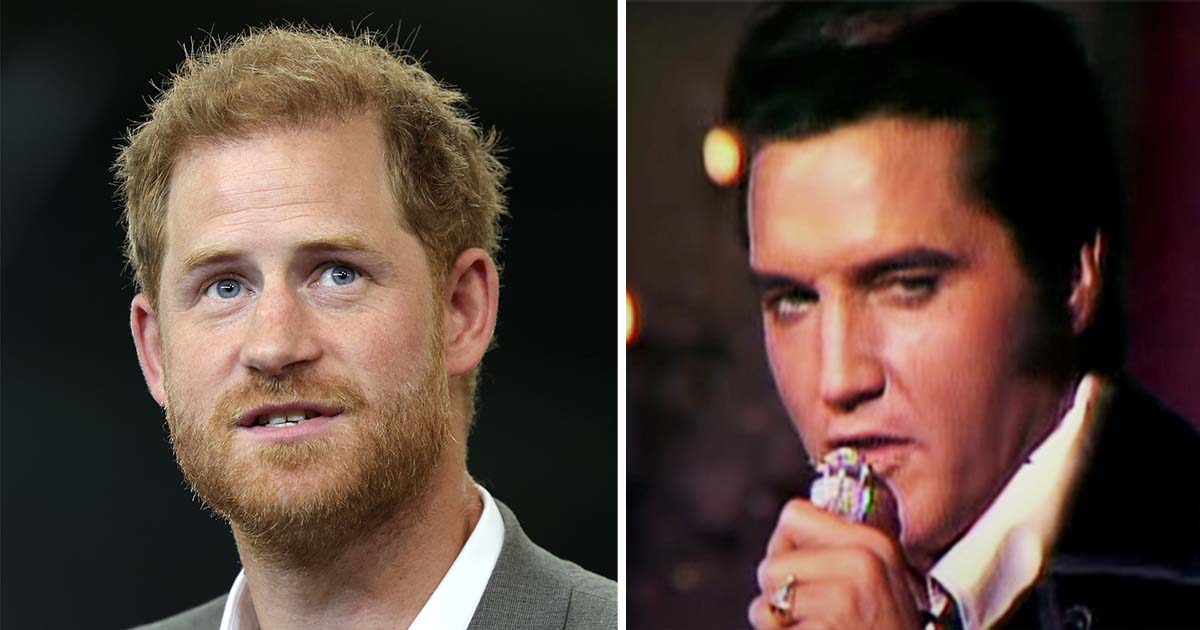 Prince Harry has met many celebrities and people of significance through over the course of his life.

Indeed, the Prince is said to have many celebrity friends, including James Corden, Tom Hardy, and David Beckham. As a result, one can imagine that he often has the opportunity to visit some exceptional places. One such place, reportedly, was the former home of Elvis Presley, Graceland.

In 2014, Harry accompanied his brother, Prince William, on a USA trip for the wedding of their close friend Guy Pelly at the famous Elvis estate.

Harry, though, had other things on his mind beside his friend’s union. Upon receiving a tour of the legendary estate, he wasn’t impressed at all. “The King’s” home – where his daughter Lisa Marie Presley was laid to rest last weekend – was, according to Harry, a claustrophobic badger den.

Being a member of the British Royal Family means you get to meet many prominent people, from Heads of State, to sports stars, musical geniuses, and other celebrities.

Some royals even become friends with celebrities. Others even choose to marry one.

Take Prince Harry, for example, whose wife, Meghan Markle, was a big television star when they met in 2016.

Meghan’s first “role” was as a briefcase girl on the game show Deal or No Deal back in 2006, three years after graduating from Northwestern University.

“I was the ill-fated number 26, which for some reason no one would ever choose,” Meghan told Esquire.

“I would end up standing up there forever in these terribly uncomfortable and inexpensive five-inch heels just waiting for someone to pick my number so I could go and sit down.”

Soon after, she started appearing in other productions, landing more minor roles in films such as Get Him to the Greek and Remember Me, as well as the television series General Hospital. However, everything changed in 2011 when she landed the part of paralegal Rachel Zane on USA’s monster hit Suits.

Meghan played the part of Rachel until 2018. That was also the year her life would change forever when she married Prince Harry and left the acting world behind.

Media from all over the world covered Harry and Meghan’s wedding. The interest in the lovely couple was, of course, significant in Britain as well. Thousands of people lined the streets of London to get a glimpse of the newly-weds. The wedding itself was packed with prominent guests, as well as a who’s who of celebrities. Most of the Suits cast, whom Meghan had worked with for years, were in attendance.

Other, major A-list celebrities were there as well, though several questions have since been raised about their presence.

Two guests were movie star George Clooney and his wife, Amal – reports suggest that they didn’t know Harry or Meghan at all.

“There’s a story doing the rounds that while Carolyn Bartholomew, Diana’s former flatmate, was waiting for the wedding service to start, she turned to the couple alongside her and asked how they knew Harry or Meghan,” Johnson wrote in the online publication AirMail.

“‘We don’t,’ the Clooneys answered brightly.”

After the wedding, Harry and Meghan were said to have visited the Clooneys at their residence in Como, Italy. George Clooney explained that the four have had dinner several times in recent years.

Oprah Winfrey also attended the wedding, though most people were perplexed at the time as there hadn’t been any talk regarding the talk show host’s relationship to either Harry and Meghan. As royal reporter Daniela Elser pointed out, one article’s headline even read: “Oprah Winfrey has arrived at the royal wedding – but people aren’t sure why.”

“(She) populated the wedding with A-list Hollywood celebrities who … have proved their worth to her by speaking out in public about the criticisms of her,” Morton said.

“I don’t think she (had) even met Oprah Winfrey (before the wedding). I don’t know whether Harry had. But she invited these people along, and now she has her own court.

“She’s a new player and she’s been quick out (of) the starting box. Unlike Prince Harry’s friends who keep quiet, Megan’s A-list celebrity friends, the court of Meghan, is a very voluble court and they’re very powerful.”

For Prince Harry, being around celebrities and spending time at legendary spots was nothing new when he met Meghan. In 2014, he got to visit one of the most unique places in the world of music, especially for all those who count themselves fans of “The King,” Elvis Presley.

Whether or not Hary has ever been a fan of Elvis’ music remains unclear. What we do know, though, is that when he visited Graceland it was clear that he was less than impressed with the legendary musician’s estate.

The King of Rock gave the entire world something new with his music. One of the greatest entertainers we’ve ever seen, he was equally talented as he was charismatic.

Besides being a major music star – with songs like Jailhouse Rock, In The Ghetto, Hound Dog, and Love Me Tender – Elvis appeared in a collection of films that helped to elevate his career to new levels. These included King Creole (1958), Viva Las Vegas (1964), and The Trouble with Girls (1969), amongst other classics.

Tragically, Elvis passed away in August of 1977, leaving the world to mourn a true phenom of entertainment.

Elvis’s estate, Graceland, located outside of Memphis, Tennessee, became one of the most famous places in the world when the musician bought it for $102,500 in 1959. According to its museum, Elvis moved into Graceland on June 26, 1957, and lived there until his tragic passing.

Just years later, in 1982, his former wife Priscilla, alongside two executors, converted it into a museum to maintain the estate and Elvis’ legacy.

Graceland has 23 rooms and measures 17,552 square feet. Today, it’s one of the biggest tourist attractions in the US, attracting around 600,000 people annually, and is reportedly the second most-visited house in the US, behind only the White House. Since its opening in 1982, more than 22 million visitors worldwide have stopped by.

It is said to cost the Presley family around $500,000 each year to maintain the estate.

As mentioned, Prince Harry and Prince William were among the visitors to Graceland over the years, though their experience was a little bit more exclusive than most.

In May 2014, Harry and William traveled to the US for their friend Guy Pelly’s wedding. He was to tie the knot to American Holiday Inn heiress Lizzy Smith, and after a couple of days in Miami, the royal brothers flew to Graceland for the wedding.

Harry and William had the pleasure of getting a tour of Elvis’s legendary home. According to the Daily Express, the property includes eight bedrooms and bathrooms, as well as 14 TVs.

“It reminded me of the badger sett”

Now, Graceland might not be as flashy as Buckingham Palace or Balmoral, but the estate is enormous and, most of all, boasts a legendary sense of reverence with regards to music history.

Yet it seems as though Prince Harry was anything but impressed with “The King’s” home. In his memoir, Spare, Harry recalled the visit to Graceland as “claustrophobic.”

“People variously called the house a castle, a mansion, a palace. But it reminded me of the badger sett. Dark, claustrophobic. I walked around saying, ‘The King lived here, you say? Really?'”

“I stood in one tiny room with loud furniture and shag carpet and thought, ‘The King’s interior designer must have been on acid.'”

Harry added: “In honour of Elvis, every member of the bridal party wore blue suede shoes. At the reception, there was much kicking up of those shoes. Young British men and women dancing drunkenly and singing gleefully without pitch or rhythm. It was riotous, ridiculous. And Guy looked happier than I’d ever seen him.”

Though Harry might not have approved of aspects of Elvis’s home, the two actually have one rather significant thing in common. Elvis’s mother, Gladys, died at age 46 in 1958, just like Harry’s mother, Diana, who also passed away young.

Elvis and his mother are buried next to each other in the Meditation Garden at Graceland. Recently, they were joined by a third and fourth generation, as Elvis’ daughter, Lisa Marie Presley, was laid to rest alongside her son, Benjamin Keough.

In addition, there were live music performances from artists such as Axl Rose and The Tennessee Mass Choir. Lisa Marie’s mother, Priscilla Presley, also gave an emotional speech.

“Our heart is broken,” Priscilla said. “Lisa, we all love you.”

As mentioned, Prince Harry and Prince William were two royals that had already visited Graceland. But for the funeral of Lisa Marie, another royal showed face: Sarah Ferguson, The Duchess of York.

According to Vanity Fair, Lisa Marie Presley and Sarah Ferguson reportedly became friends when Elvis’ daughter moved to England with her ex-husband, Michael Lockwood. The pair bought a house in east Sussex.

“The two hit it off from the beginning. They grew close and kept in touch even when Lisa Marie moved back to the United States,” a friend of Sarah Ferguson told Entertainment Tonight, adding that Lisa Marie was “one of the few people who reached out to her during some of her difficult times.”

“Grief is the price we pay for love”

During the memorial service at Graceland, Sarah said a few words about her late friend. She also shared words from her mother-in-law, Queen Elizabeth, quoting a statement made by the late monarch after 9/11.

“My late mother-in-law used to say that nothing can be said, can begin to take away the anguish and the pain of these moments, because grief is the price we pay for love,” Ferguson said. “And how right she was.”

The Duchess shared that she and Lisa Marie used to call each other “sissy,” and that they would honor other members of the Presley family.

“We look at Priscilla as a mother to Lisa Marie. We look to Lisa Marie, and say, you lost a son,” Ferguson said. “Mothers losing children—there are no words for it. Today we talk about action, and action is the way we can go forward.”

She added, “For Riley, for Harper and Finley, and for the entire family, we march forward in support of you – all of us are with you and we will help you as best we can. If you put out your hand we will be there.”