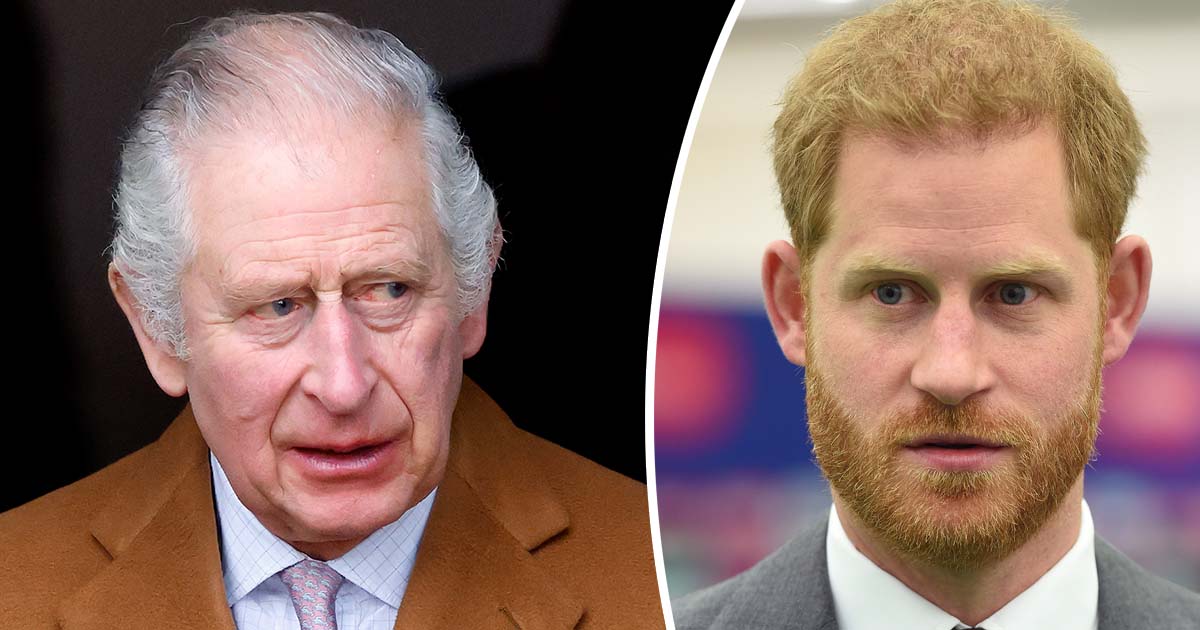 Prince Harry’s book Spare has taken the world by storm. Millions have read it, and its contents has turned the spotlight firmly on the British monarchy once again.

What might happen between Harry, his brother, Prince William, and his father, King Charles, is still unknown. However, reports suggest they haven’t spoken since the book was released, and we still don’t know whether Harry will attend Charles’s coronation in May.

While Harry’s explosive tell-all memoir gave insights into his royal life and various revelations about his family, he also penned plenty of material didn’t make the cut.

According to royal expert Tom Bower, that alone has left King Charles afraid, as he reportedly fears his son “has barely scratched the surface.”

Harry’s book offers a new side to his feelings about royal life – the life he left after more than 30 years to begin anew in the US with his wife, Meghan Markle, and their children, Archie and Lilibet.

Of course, Harry’s younger years were forever scarred when he lost his mother, Princess Diana, in a car crash.

“I can’t really necessarily remember what I said, but all I do remember is probably regretting for the rest of my life, how short that call was,” Harry said.

Princess Diana was loved by people all over the world. But, sadly, she was hounded by the British tabloids, who paid ridiculous amounts of money for pictures of her.

Over the years, Harry has spoken about his beloved mother many times. In the HBO documentary Diana, Our Mother: Her Life and Legacy, he recalled the last phone call he ever had with his mother, on the same day she tragically passed away.

While the inner royal circle was tight-knit, Diana found another great friend in her butler, Paul Burrell. He began working for Charles and Diana at Highgrove House in 1987 and stayed with the princess until her passing in 1997. He once claimed Diana told him he was the “only man” she trusted.

In his 2003 book, A Royal Duty, Burrell published several private revelations which left Harry furious. He and his brother even released a statement accusing Burrell of “a cold and overt betrayal.”

From that day on, Harry and Paul were at odds with one another. In Spare, Harry lashed out at his mother’s former butler, saying he was “milking” his mother’s death for money. In addition, Harry noted that the release of A Royal Duty “made his blood boil.”

“He was milking her disappearance for money. It made my blood boil.”

Princess Diana’s passing became an enormous tragedy. She was loved worldwide, and the scrutiny she suffered in the years prior her death demanded the sympathy of millions. She described her marriage with then-Prince Charles as a marriage with “three people in it,” referring to the fact that her husband had an affair with Camilla Parker Bowles.

Charles and Camilla were painted as villains in the unfortunate saga. In his book, Spare, Harry criticized his stepmother, claiming that she leaked stories to the press to gain better, more favorable coverage of herself.

“That made her dangerous because of the connections that she was forging within the British press,” Harry said.

“And there was open willingness on both sides to trade of information. And with a family built on hierarchy, and with her, on the way to being Queen Consort, there was gonna be people or bodies left in the street because of that.”

“If you are led to believe, as a member of the family, that being on the front page, having positive headlines, positive stories written about you, is going to improve your reputation or increase the chances of you being accepted as monarch by the British public, then that’s what you’re gonna do.”

Criticized his father for no-support after Diana’s passing

But Harry didn’t stop there. Several other family members, including Prince William and Kate Middleton, got their fair share of criticism in Spare, as Harry laid out his side of the story. That included King Charles, who Harry claimed didn’t support him enough after his mother passed away.

Besides that, he also recalled the horrific day Diana died and how his father sat beside his bed, saying, “Darling boy, Mummy’s been in a car crash.”

“There were complications. Mummy was quite badly injured and taken to hospital, darling boy,” Harry recalled his father saying. “He always called me ‘darling boy,’ but he was saying it quite a lot now. His voice was soft. He was in shock, it seemed.”

“With a head injury. They tried, darling boy. I’m afraid she didn’t make it.”

The Prince further revealed that Charles just put his hand on his knee, saying, “It’s going to be OK,” but that he “didn’t hug” him.

Harry added: “Everyone knows where they were and what they were doing the night my mother died.

“I cried once, at the burial, and you know I go into detail about how strange it was and how actually there was some guilt that I felt and I think William felt as well, by walking around the outside of Kensington Palace.”

Harry’s book has been an enormous success. It sold 1.4 million copies on its first day in the UK, United States, and Canada, becoming the fastest-selling non-fiction book of all time.

Even so, it appears that Harry might have more to tell.

Though Harry revealed many things in his book, there was also plenty didn’t make the final cut. In an interview with The Telegraph, he explained that the first draft of his book was 800 pages long.

“It could have been two books, put it that way,” Harry explained, adding that there were some things he simply left unsaid.

“There are some things that have happened, especially between me and my brother, and to some extent between me and my father, that I just don’t want the world to know. Because I don’t think they would ever forgive me.”

Harry added: “And there were other bits that I shared with [ghost writer of Spare] J.R. Moehringer, that I said, ‘Look, I’m telling you this for context, but there’s absolutely no way I’m putting it in there.'”

Of course, the mere fact that Harry has more to draw from in reserve isn’t good for the Royal Family, least not King Charles.

According to Tim Bower, the king fears his son “has barely scratched the surface” with his revelations about the royals which were included in his book.

Charles is worried that Harry may reveal new things moving forward. Furthermore, the royal expert claims he’d have good reason for doing so.

Referring to Harry’s latest claims in his interview with The Telegraph – where he admitted he had kept stories about his brother and father out of the book – Charles is said to fear that “the chickens will come home to roost.”

“No one knows better than Charles that Harry has barely scratched the surface when it comes to his tumultuous marriage to Diana, his difficult relationship with his own parents and his adulterous relationship with Camilla,” Bower wrote.

“The embattled King knows he has good reason to fear his son.”

He added that the King’s resolve might be “weakened by guilt” over Harry’s claim that Charles didn’t adequately support his sons after Diana had passed away.

“All too often, at weekends and during school holidays, Harry was left in the care of his nanny at Highgrove while his father pursued his own interests or nestled in another home with Camilla,” Bower wrote.

“Impossible” for the royal family to compromise with Harry & Meghan

Now, the question regarding Harry and Meghan’s potential attendance for King Charles’ coronation on May 6 has been a hot topic for months. It’s unclear whether the couple will even be invited to the coronation – or if they’ll accept an invitation if they are.

According to a The Sun source: “There has been no conversations or contact.”

No matter what, royal expert Tom Bower – author of the unauthorized biography of Meghan Markle, Revenge: Meghan, Harry, and the War Between the Windsors – says it will be “impossible” for the Royal Family to reach a compromise with Harry and Meghan. This, in the main, is because Harry and Meghan will only accept a “groveling apology” and a “capitulation.”

“There’s no compromise with the Sussexes. They are set on one thing, which is to get a groveling apology, a capitulation. They want William, Kate, and King Charles to say that the Sussexes are absolutely right and have been wronged. But they’re not right and haven’t been wronged,” Bower said, adding that Charles should abandon any attempts at a “peace summit.”

Bower added: “For the Royal Family to in any way seek a compromise with a couple who have proven themselves to be so unreliable, untrustworthy and deceptive is a recipe for undermining the monarchy.”

Meanwhile, Harry has already demanded an apology from his family for their treatment. As one should understand by this point, things are a bit complicated.

“The Royal Family has to draw a line”

Bower believes Harry and Meghan have already done “colossal” damage to the monarchy, and that they must stay true to the path they now find themselves on.

He added that ever since the Oprah interview, the Sussexes have “spewed out accusations, misrepresentations, inaccuracies and often downright lies.”

“I think Harry has no other option for his own profit and Meghan’s profit to continue these allegations into infinity,” Bower explained.

“At some stage, the Royal Family has to draw a line and say that these allegations are untrue and the institution – which is supported by the majority of Britons – represents us and will not be traduced by this couple in California who hate them but keep their titles.”

He added: “They’ve so far earned over $120 million just by rubbishing and fabricating, in my view, about a family who provides a huge service to Britain.”