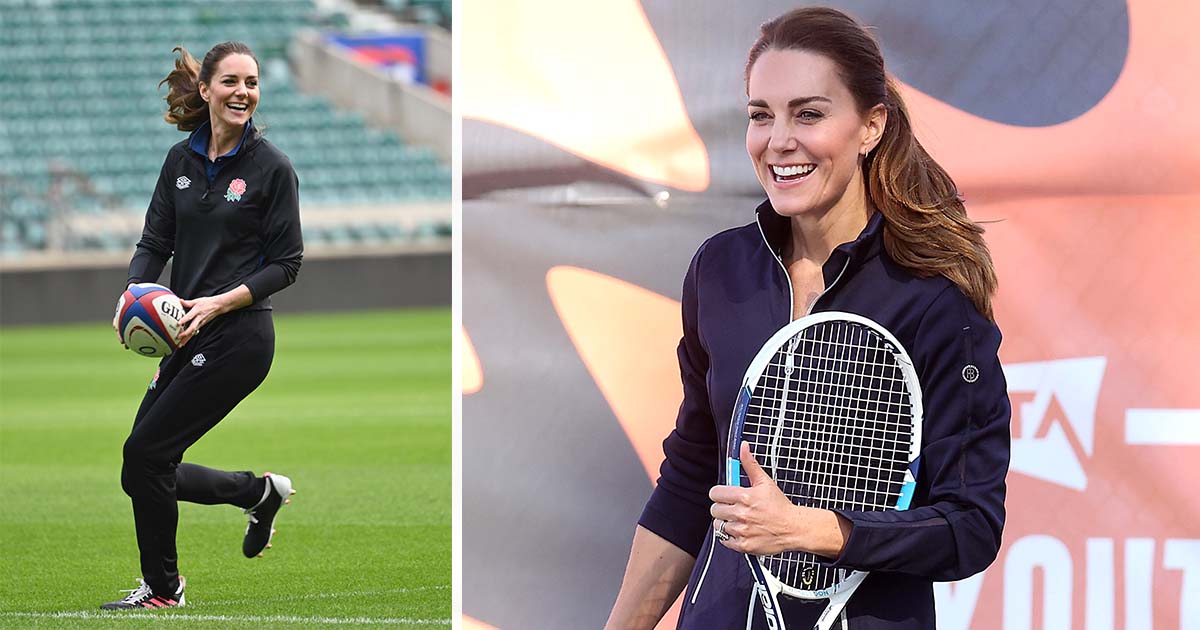 Kate Middleton has always been pictured as a healthy, energetic, and encouraging individual. Amongst other things, the Princess of Wales took over Prince Harry’s English rugby patronage, and has previously visited many schools and other institutions where she herself has engaged in sports activities.

But life as a princess can be understandably stressful, especially when one is married to a future king. It’s also hard for Kate, as a mother of three, to find the time to partake in extra-curricular activities, exercise included.

Recently, though, Kate shared a trick for getting her workout in – and answered the question as to why she gets on a trampoline early in the morning each day.

Kate Middleton and the rest of the Royal Family are in the process of moving on following the release of Prince Harry’s memoir, Spare, two weeks ago. The book was highly-anticipated by royal fans, and though much of the world was given a taste of things to come through Harry and Meghan’s candid documentary series on Netflix, Spare was something entirely else.

Harry laid out his entire royal life within its pages, including the tragic day his mother passed away, and revealed all manner of things concerning what it was like growing up within palaces and castles.

Several members of the Royal Family found themselves the subject of criticism from Harry, and Kate, perhaps surprisingly, was not spared. The Prince revealed how Kate and Meghan had a heated argument over text before he and the Duchess’s wedding in 2018, after young Princess Charlotte started crying over her dress during the flower girl dresses fitting.

Moreover, Harry also painted a picture of Kate being unwelcoming and uptight regarding Meghan’s introduction into the family. Meghan herself touched upon that in the aforementioned Netflix series, which aired in December.

It seems that Meghan had a tough time after becoming a part of the Royal Family. Upon meeting Prince William and Kate Middleton for the first time, the former actress realized she was heading into unknown territory.

Though Meghan and Kate reportedly got along pretty well initially, their relationship today is not what it once was.

Now, we’re all aware that the British royals have a particular way of behaving in public, and that they have traditions and protocols they’re expected to follow.

It makes sense to assume that Meghan was probably aware of this as well, though she admitted to being surprised after meeting Kate for the first time.

Meghan, Harry, William, and Kate are said to have met for a couples’ dinner. Yet though it was supposed to be an intimate gathering, Kate showed less outward affection than Meghan would’ve liked.

In the documentary series, Meghan took a swing at Kate for being reserved and not as welcoming as the former actress expected her to be.

“When Will and Kate came over, and I met her for the first time, they came over for dinner, I remember I was in ripped jeans, and I was barefoot,” Meghan said in the Netflix series.

“I was a hugger. I’ve always been a hugger, I didn’t realize that that is really jarring for a lot of Brits.”

She continued: “I guess I started to understand very quickly that the formality on the outside carried through on the inside. There is a forward-facing way of being, and then you close the door and go ‘You can relax now’, but that formality carries over on both sides. And that was surprising to me.”

The Royal Family has decided not to comment on the content in the Netflix documentary or Harry’s memoir – William and Kate have already dodged questions from journalists regarding Spare. Still, it’s been reported that Kate was “baffled” about what Harry had written, and the personal attacks he leveled at her.

At the same time, however, the Princess of Wales is not said to be too angry about it as she is “totally immersed” in her work and reportedly too busy “to take much notice.”

Since joining the Royal Family, Kate Middleton has been involved in many special projects close to her heart. After she and William became the Prince and Princess of Wales, they took on even more duties. Kate, for example, has taken over a number patronages, including becoming the patron of English rugby after Prince Harry’s departure from the royal fold.

Instead of fretting about Harry and his book, Kate has, by all accounts, continued to work hard. She’s now getting ready to launch a brand new campaign to help children and future generations.

Kate has always viewed children and their well-being as a cause close to her heart. For years, she has promoted the importance of speaking about mental health. The Princess of Wales has worked tirelessly to highlight social issues such as homelessness among children, and child care in hospitals all over Britain.

“Of course, there have been other distractions but the princess has had far more important things on her mind. It’s an important and exciting time,” a royal source told Mirror.

“The campaign she has been working on really is the result of several months behind the scenes (and) will launch a new three to five year programme.”

The source added: “(Kate) spends a lot of time reading, meeting and speaking with professionals across the entire field – but this isn’t just one project, it’s an opportunity to make generational change for all our children.”

Advocator for a healthy lifestyle

As a result, Kate’s been praised for her work involving children. Not only does she look at serious social challenges and problems, but Kate has consistently advocated for healthy living, including regular exercise and healthy eating.

Naturally, being the Princess of Wales as well as a mother of three is demanding. Kate has plenty on her hands between work and raising her children together with William, which means she doesn’t have too much spare time on her hands.

It’s widely known that Kate is a big fan of working out and spending time outdoors, which she previously has spoken on. Needless to say, the manner of her workout routines, and what she does to stay fit and healthy, have become a subject of much public interest.

Kate Middleton is a hands-on mother and very dedicated to raising her children in the right way. That extends to her views on exercise, which were formulated way back when she was young.

“My parents were hugely dedicated”

Kate grew up in the English countryside, giving her a considerable interest in the outdoors and not being afraid of getting dirty.

“I’m very lucky I’ve come from a very strong family. My parents were hugely dedicated to us – myself and my siblings. I really appreciate now, as a parent, how much they sacrificed for us,” Middleton said on the Happy Mum, Happy Baby podcast.

“They would come to every sports match, I was very keen on sport, they’d be the ones on the sidelines shouting. We’d always have our family holidays together. I think the things that resonate with me most are the simple things, and I think I see that even with my own children.”

As Kate described, her life is “so busy,” but the time she spends with her children gives her true happiness. She once revealed that “watching a fire on a really rainy day” is something that “provides such enjoyment.” Going for family walks with her kids, Prince George, Princess Charlotte, and Prince Louis, meanwhile, is something she tries to prioritize.

Kate is heavily involved in all aspects of her kids’ life, including getting ready for school. As it turns out, getting the little ones ready for school can also mean exercise for Kate and her royal children.

Previously, the Daily Mail revealed that Kate has her own exercise routine. It involves a move called the plank, which they describe as similar to a push-up, only with one’s forearms resting on the ground.

It turns out that Kate is very good at it.

“There are three elements; the basic plank, the side plank, and the prone skydive, all of which are positions Kate can hold for 45 seconds or longer and repeat at least ten times each,” the source told the Daily Mail.

“The side plank requires you to balance on your side, holding your body straight with feet together and one arm flexed directly under your shoulder.

“Meanwhile, the prone sky dive plank is slightly less excruciating, as you have to lie on your tummy and gently raise your chest off the floor until your tummy muscles beg for mercy,” the source added.

Moreover, Kate uses an inflated gym ball to work her abs, an insider revealed. As her impressive physique and active lifestyle have progressed, the Princess is always ready to try new sports.

At school, Kate played hockey and tennis and even participated in cross-country running. Today, though, it seems like one of her favorite activities involves her children, and is performed early in the morning.

As one can imagine, mornings at William and Kate’s residence can be pretty hectic with three young children. The Princess has previously stated that she and William have struggled with plaiting Charlotte’s hair, and we can only imagine the stress levels involved when you’re trying to organize and marshall three excitable children.

Kate reveals she jumps on the trampoline in the morning

Sometimes, however, the family has some extra time on their hands. When they do, Kate reportedly doesn’t hesitate to join her kids on the trampoline in their garden.

When meeting players from England’s wheelchair rugby league team last week, Kate gave them some insight into her workout routine. It includes bouncing on the trampoline with George, Charlotte, and Louis – which she reveals is a workout itself.

“It’s running around after the children – I do it all. Whenever I can squeeze in exercise, I do, even jumping on the trampoline with my children before school,” Kate revealed.

George has previously been known to enjoy tennis and martial arts, while Charlotte has a thing for gymnastics. In time, William and Kate’s youngest child, Louis, will likely also become an active child. According to Kate, he loves rugby.

“They all love sport and Louis is mad about rugby. They are at an age where they just love running around,” the Princess revealed.

Please, share this article on Facebook with friends and family if you enjoy reading about the royals!