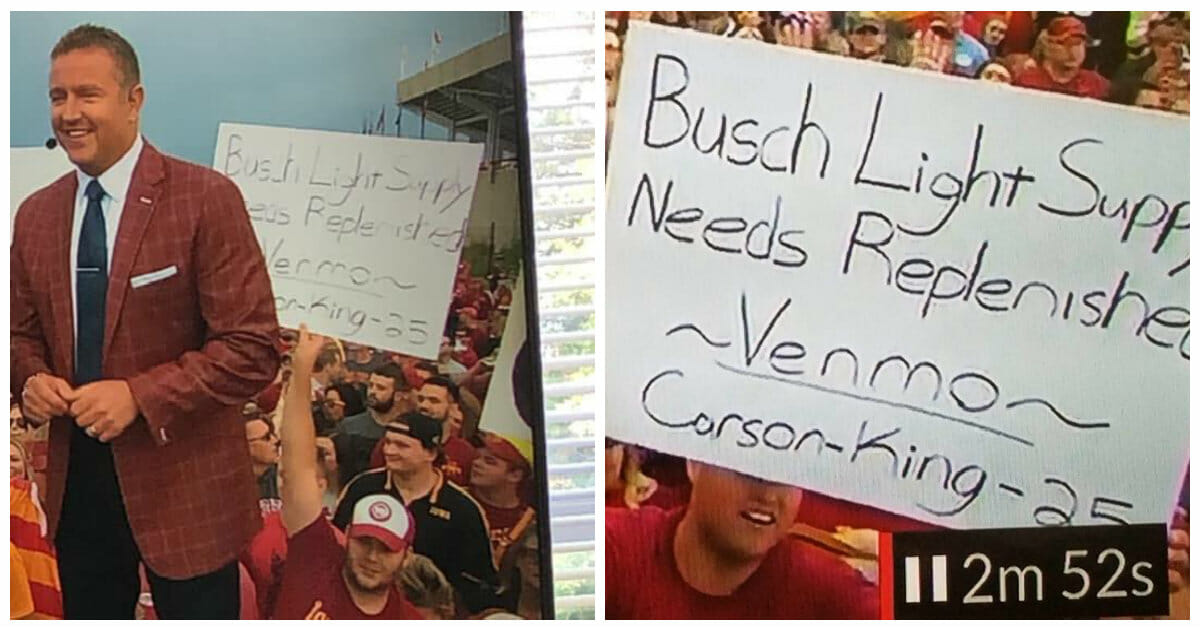 We’re heading into the fall, which means that college football season is underway. Students across the country are going out to the big games to support their favorite teams.

And what better way to do that then make a funny sign? Turn on a game and you’ll spot those handmade banners in the crowd, full of team in-jokes and memes, a way to have a laugh at the game while boosting team morale. 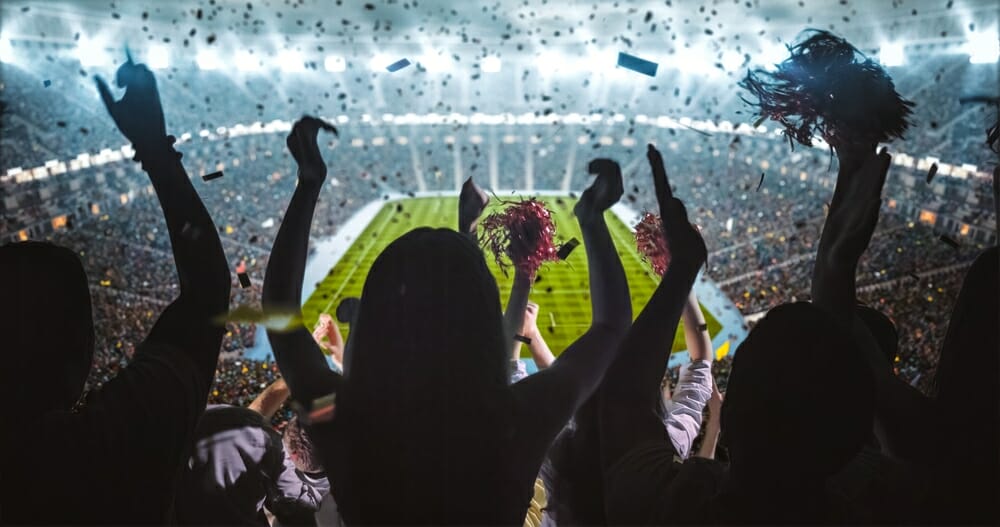 But one man’s joke sign got him some attention he never expected… and decided to turn his moment of fame into a way to do good, generating thousands of dollars in donations for a worthy cause.

On Saturday, Iowa State University played their rival the University of Iowa as part of their Cy-Hawk series.

It was a dream come true for Carson King, a 24-year-old ISU fan from Altoona, who attended the game.

“It was a lifetime dream of ours to go to GameDay,” he told WHO TV. “It was electric… Just non-stop energy. People singing, dancing and having a good time the entire time.”

But even throughout that excitement, Carson still managed to stand out in the crowd, when his sign managed to make it on the air:

“My mom was like ‘this is going to be a proud mom moment. My son is going to be begging for money for beer on national television,'” Carson recalled.

The sign was a hit, and could be seen all over the TV broadcast of the game. Much to Carson’s surprise, though, people actually took up his request… and started donating in droves.

“I looked down and I had about $400 on my Venmo account,” Carson recalled. “I had people from Texas, Idaho, California, Massachusetts, all over.” Soon, he was reaching over $1,000.

It could’ve bought an awful lot of Busch Light… but instead he had a better idea.

As donations poured in, he announced that while he would keep just enough to get that case of beer he was after, the rest would be donated to the University of Iowa Stead Family Children’s Hospital.

With all the donations my @CollegeGameDay sign for @BuschBeer has received, I will be donating all but enough for a case of Busch Light to @uiowa Children’s Hospital. We’re at over $1,600.00 right now! @CycloneATH @WideRtNattyLt @ChrisMWilliams Venmo Carson-King-25

The hospital in Iowa City already has some ties to the world of college football. Since 2017, it’s become a tradition for Hawkeyes fans to wave at the neighboring hospital.

For Carson, this seemed like a great cause to put the money towards… one that even transcended football rivalries.

“Their hospital does great things for the state of Iowa,” he told WHO TV. “Both for Iowa State and the University of Iowa.”

“Those kids are fighters and they deserve any chance they can get.”

While Carson’s mom initially rolled her eyes at the sign, she was very proud that her son turned it into such a selfless cause.

“He’s not a wealthy kid by any means,” Dana Archer-King told the Des Moines Register. “I’m not sure how many 24-year-olds would just give that kind of money away. We’re all so in awe with what he’s doing.”

Considering how many people were down to donate beer money as a joke, it’s not surprising that even more people have come out to support the children’s hospital. According to Carson’s Twitter, he has currently raised over $10,000 in donations, which continue to roll in.

But today, he got a major breakthrough: Busch Beer heard about the story, and announced that they would be matching his donations! “This is the best thing we have read all year, we’re inspired,” the brand wrote.

.@CarsonKing2 this is the best thing we have read all year, we’re inspired.

We’re going to match your donation to University of Iowa Hospitals & Clinics, and we’ll throw in some of that Busch Light you were looking for. https://t.co/NPPrPp6zJg

And he’s finally gonna get some of that beer!

But that wasn’t all: not to be outdone, the other big company in this story, Venmo, decided to get in on the action as well, pledged their own donation match.

We see a lot of great stories, but this is one of our favs @CarsonKing2. Count us in for matching the donation to the hospital, too. #ftk?@BuschBeer @CollegeGameDay https://t.co/thS8JXOXC3

That means the hospital will be receiving at least $30,000 in donations. It’s crazy to think how a joke sign turned out to do so much good. “This was way better than expected,” Carson said.

“It just goes to show that no matter if you’re a Hawkeye fan, Cyclone fan, or Grand View Viking, we’re all Iowans, and Iowans take care of each other.”

The fundraiser is ongoing, and who knows how much higher that total will reach? Help spread the word by sharing this story!