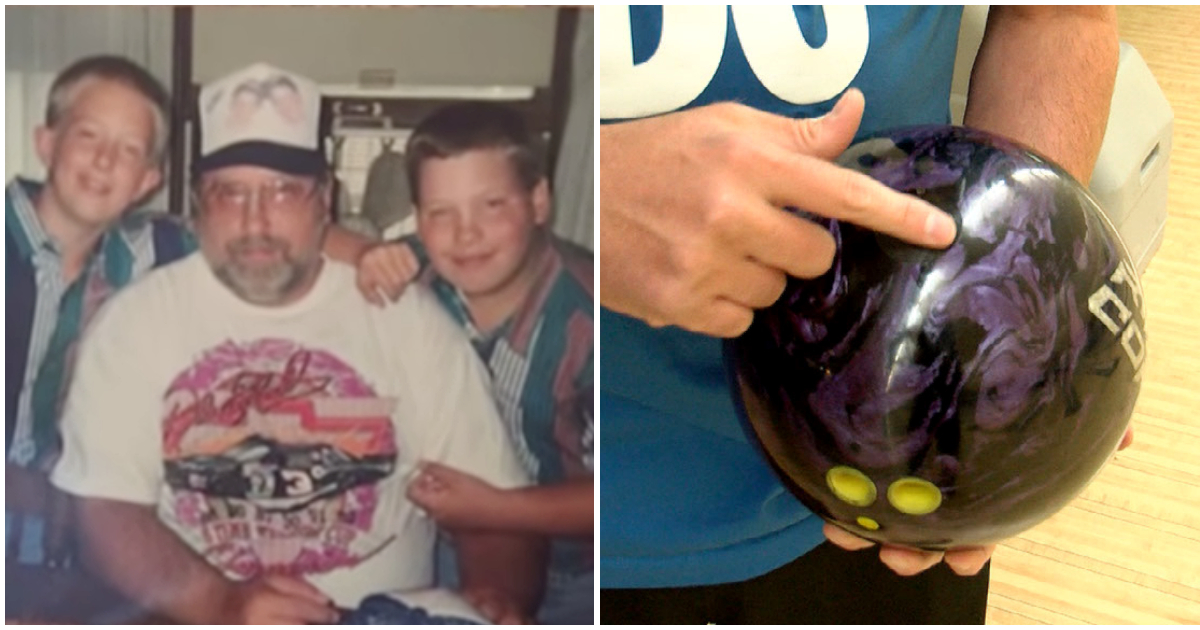 When someone passes away, they might choose to be cremated and have their remains given to loved ones. Ashes are typically kept as a reminder of the departed, or scattered in a place they loved, like the sea.

Others take a very different approach, doing things that are far from conventional but still honor the person’s life — like the man whose ashes were mixed into a beer and poured down the drain at his favorite pub.

That was the case for one man, who put his father’s ashes in a very unexpected place —a bowling ball — but did something extraordinary to honor the late man’s life.

John Hinkle, a school conselor from Peoria, Illinois, is a great bowler. He was a two-time NCAA bowling champ at Western Illinois University, and continues to play in a league. And his passion for bowling began at a young age, thanks to his father, John Sr.

“Bowling was a big part of my whole family,” John told ESPN. “Growing up my twin and I lived in the bowling alley waiting on mom and dad to finish their league nights. Every Saturday morning they would take us to bowl in our league, starting at the age of four.”

“As we got older you would never see my brother and I bowl without our parents sitting right there supporting us.”

John’s father died in 2016. And recently, John decided to put into action a very unique way to honor his father: put his ashes in a bowling ball, and roll a perfect game.

John is a two-handed bowler, which according to the rules means he can’t have three finger holes in his ball, so one of the holes was specially adapted to hold his father’s ashes.

With their dad there in spirit, John and his twin brother headed to their local Landmark Lanes on April 12, and John set out to bowl a perfect game.

Even for a professional bowler, a perfect game is no easy task: it requires 12 strikes in a row, one in each of the first nine frames plus three in the tenth.

But John had a great night on the lane, and as he reached his final frame, the emotions began to sweep over him.

“I had tears in my eyes trying to throw the last two balls of that game,” John told Fox News.

“It was hard for me to hold it together because I was so close to doing what I set out to do and all my emotions were really hitting me, trying to throw the ball. That last ball I threw, I had no idea where it went. I just threw it and it struck.”

The culmination of his perfect game was captured on video, and it shows how personal the moment was:

With the perfect game cemented, John broke down and was embraced by his brother.

“I got down to the ground and I cried,” John said. “And my brother was right there to pick me up, and we hugged it out and he cried, I cried. I was an emotional wreck.”

“I can’t express what tonight means to me,” he later wrote on Facebook. “[My dad] never had a perfect game until NOW.”

“I’ve been bowling for 34 years now and this is obviously the best moment ever,” he told Fox.

John says he will use the ball for the rest of the tournament, then retire it from play to keep it on display. “I accomplished what I wanted to do for my father,” he told ESPN.

What an amazing achievement. We know that John’s father was there with him, helping him roll that perfect game.