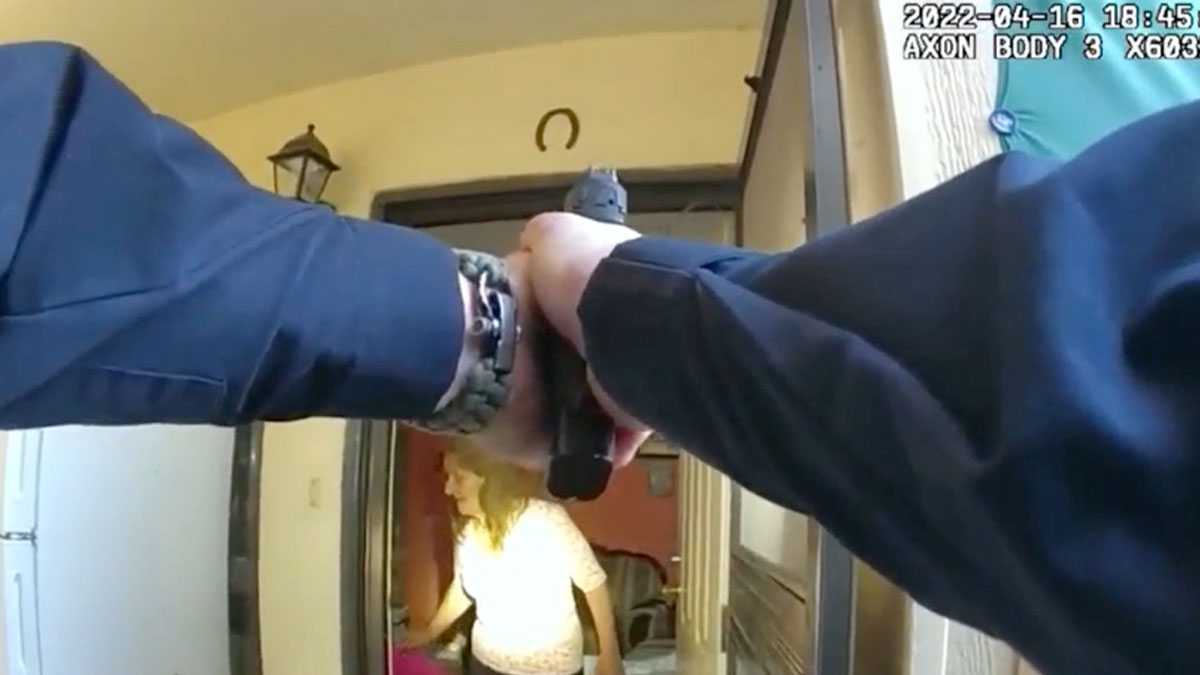 Newly released video shows the moment a Las Cruces police officer fatally shot a 75-year-old woman who was standing inside her home and said to be holding two kitchen knives at the time.

The horrifying moment occurred on April 16, but body camera footage from that evening was only recently released.

Some may find the contents of this video disturbing.

On April 16, Jennifer Enriquez called 911 and told a dispatcher that her mother, Amelia Baca was threatening to kill her.

“I really need an officer, an ambulance, or someone because my mother’s getting aggressive right now,” she told the dispatcher, according to the DailyMail. “She’s 75 and she has dementia. I’m hiding in a room because she is threatening to kill me…I have my little one here.”

Enriquez explained that she was unsure if her mother took her medicine that morning, and she was also unsure where she had obtained the weapon.

Baca began banging the kitchen floor with the knife and throwing hot water.

Las Cruces Sun News reported that while Enriquez and her family sheltered in place, Albitar Inoh, Baca’s granddaughter, and her mother went to help.

“When we got here, my grandma was holding the knives in the living room,” Inoh told police.

She calmly asked her grandmother what was happening, and Baca said people were trying to scare her. She was referring to her daughter calling the police.

Inoh attempted to retrieve the knives, but Baca received a call which distracted her and moments later they heard police sirens.

“He started yelling, and I got out in front of him,” Inoh said. “(Baca) looked confused. She didn’t look like she understood what was going on.”

“I don’t even know how many times I yelled at him ‘don’t shoot her she’s mentally ill’,” she said.

Inoh later stated that her grandmother hadn’t received an official diagnosis yet, but she experienced signs of a mental illness.

A second officer escorted Inoh and her mother out of the home – it’s believed the others in the home escaped through a window – while the officer, who has yet to be identified, continued to demand Baca drop the knives. At one point Baca put both knives in one hand and appeared to wave her hand at the officer as if telling him to leave.

The officer continues to yell and curse at her in English. Baca spoke Spanish.

According to the Las Cruces Police Department the officer has been with the force for nine years and had 70 hours of crisis intervention training.

Police say life-saving measures were administered, but Baca died at the scene.

Following Baca’s death, her family has demanded criminal charges against the officer who fatally shot the 75-year-old grandmother.

“Let me blunt, Amelia Baca was executed by the Las Cruces Police Department on April 16th of this year,” Sam Bregman, the family’s attorney, said during a press conference Thursday. “This should have never happened, it didn’t need to happen.”

“Instead of assessing the situation, as they are supposedly trained and ordered to do, this police officer shot this 75-year old grandma twice, execution style,” Bregman said. “This yelling was all done in English. Ms. Baca is a Spanish speaker and does not understand English.”

During the conference, Bregman presented the department’s protocol for behavioral calls, which included moving slowly and reassuring the person the police were there to help.

“You can’t walk up to someone’s front door when they’re having a mental health crisis, they have dementia and shoot them after talking to them, after yelling at them for 38 seconds,” Bregman said. “That is a violation of your constitutional rights.”

The officer who shot Baca was placed on administrative leave after the April 16 shooting. It is unclear if they are back on duty. So far no criminal charges have been filed, and the shooting is still being investigated.

This is absolutely infuriating. There had to be another way to resolve this situation.