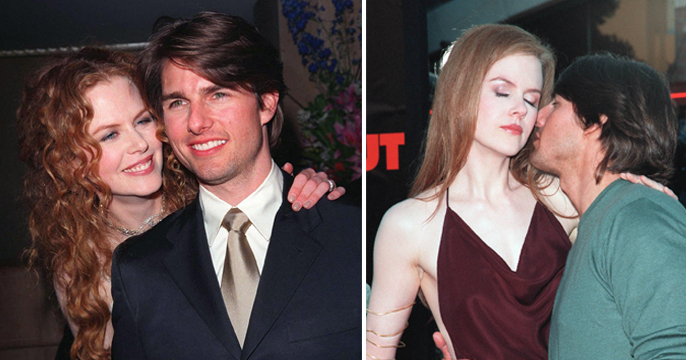 I think we can all agree that Nicole Kidman is a very successful, beautiful and talented actress.

But her life hasn’t always been easy, and the American-born Australian star has gone through a lot of heartache during her time in the spotlight.

When Hawaii-born Nicole Kidman and Tom Cruise married in 1990 after meeting on the set of movie Days of Thunder, they instantly became Hollywood’s golden couple.

Back then, Cruise was indisputably the biggest star of the two. It was also the Top Gun actor who made sure that they became a couple. Cruise noted Kidman’s acting talent when she starred in 1989 flick Dead Calm. After that, Tom persuaded the producers of Days of Thunder to make Kidman his counterpart and love interest in that movie.

The second Cruise and Kidman met, sparks flew. According to Kidman, her jaw dropped and she was totally blown away by the energetic and handsome Cruise, who was married to actress Mimi Rogers at the time.

“I had three very strong relationships before I met Tom. But I was never going to get married. Never. But he was just the most incredible, unusual man I’d ever met,” Kidman said.

Tom Cruise described Kidman as the love of his life.

“It was that special connection when you recognize your soul mate. She is a person who understands. It was as if a whole new life had started for me,” Cruise told Vanity Fair in 2002.

After falling in love on set, a whirlwind romance unfolded and the A-list couple really seemed like a match made in heaven.

”I fell madly, passionately in love. And as happens when you fall in love, my whole plan in terms of what I wanted for my life—I was like, ‘Forget it. This is it.’ I was consumed by it, willingly. And I was desperate to have a baby with him. I didn’t care if we were married. That’s what I wish I’d done,” Kidman said.

Cruise tied the knot with Kidman on Christmas Eve 1990, at a small and very quiet wedding in Telluride, a small town in the heart of Colorado’s Rocky Mountains. Only a few members of each family were present and the ceremony only took 30 minutes. One of the few outsiders who attended the wedding was actor Dustin Hoffman.

“I’d say it was the show business secretary of the year. It was so hush-hush that even my wife and I did not know about it,” Nicole Kidman’s uncle, Barry Fawcett, told New York Daily News.

Kidman wanted to have children with Cruise right after the wedding, and it seemed like her dreams were set to come true faster than many expected.

Sadly, however, she suffered an ectopic pregnancy in 1990 at the age of 23. Cruise and Nicole couple lost their baby. After that, they decided to look at other options.

For Nicole, it felt quite natural to adopt.

“My mother has an adopted sister, so it’s been part of our family and I knew it would probably play out somewhere in mine. I didn’t think that it would happen so early, but it did,” Kidman told Vanity Fair in 2007.

Through the years, the relationship between Kidman and her children – especially Isabella and Connor – has been a hot topic, since the seem to have followed their dad, a devout believer in Scientology, into the church.

Kidman admitted that she grew apart from her children after they went into Scientology. However, in an interview with Australia’s Who Magazine, she said she wants to keep her relationship with her children private.

“I know 150 percent that I would give up my life for my children because it’s what my purpose is,” Kidman said.

As we all know, the union with Tom Cruise didn’t last. The Top Gun actor filed for divorce after 11 years of marriage, citing irreconcilable differences.

”Shock to my system”

For Kidman, the separation news came out the blue.

“Our life together was perfect. It took me a very long time to heal. It was a shock to my system. That was a great relationship. I think it ran its course. I was really damaged and not sure whether love and marriage were ever going to happen again to me,” she said.

The golden couple splitting up was a bombshell in Hollywood – every tabloid speculated over the reasons for the break-up. Some sources claimed the split was due to Kidman’s wish to spend more time in Australia, while Cruise wanted to stay in the U.S. Other rumors had it that Kidman’s fertility problems led to Cruise leaving her.

However, Kidman has always stayed classy when talking about her previous marriage to Cruise. In 2006, she said that she still loved Cruise despite the brutal split.

“He was huge; still is. To me, he was just Tom, but to everybody else, he is huge. But he was lovely to me and I loved him. I still love him.”

Of course, the actress also experienced trials and heartache that she kept hidden after the divorce. More recently, she has started to open up about some of the painful memories from her past relationship.

Kidman, who is currently married to Keith Urban, spoke to Harper’s Bazaar for its upcoming October issue and the maniac media attention she received after breaking up with Cruise.

According to Kidman, her acting career was overshadowed by all the speculations and rumors in the press. Looking back at the massive media focus on her personal life, Kidman said:

“I was young. I think I offered it up?

“Maybe I’ve gotten a bit more trepidatious, but I’m always trying to be as open as possible. I just prefer to live in the world that way.”

“I’m wary at times, and I’ve been hurt, but at the same time I much prefer a warm approach rather than a prickly shutdown approach. My husband, Keith, says that when he met me, he said, ‘How’s your heart?’ And I apparently responded, ‘Open.’”

I like her acting in everything I have watched her in. I am so glad for her she found such stability within her marriage to Keith!