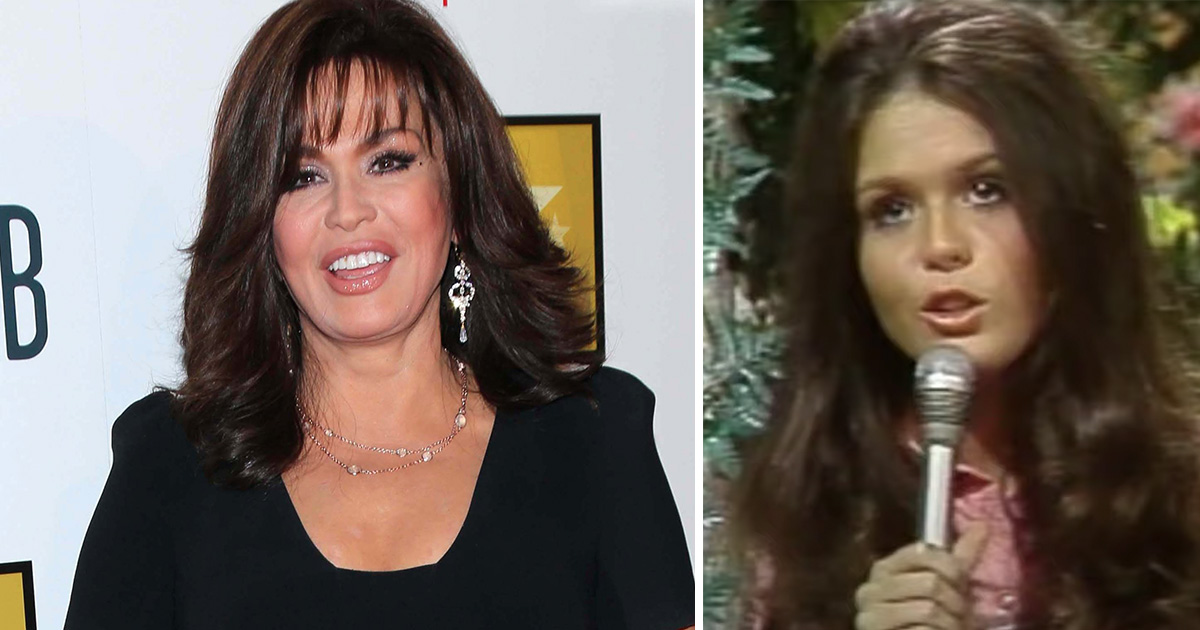 Marie Osmond has lived an entire life in show business. The singer, actress and author have had a great career, and now, she has a large family of eight children and several grandchildren.

Few celebrities have had the same amount of success in several fields as Marie Osmond. The superstar singer, known for the great affection for her fans through social media, has spent more than five decades in show business.

Osmond’s become an international superstar through her singing, television performances, dancing, acting and authorship. she’s a well known talk show hos and public speaker, loved all over the world.

Now, Marie Osmond’s 60 years old. But she doesn’t have plans on slowing down. She has a loving family, supporting her husband, and daughters, and continue to spred joy all over the world.

Together with her brother Donny, she’s also one of the most famous Mormons in the entertainment industry.

The Mormon church has changed its view on race and sex through the years, and a lot has happened in only a decade.

However, the church still receives criticism. As of today, the Mormon church accepts gay, lesbian and bisexual members into its religion as long as they live in celibacy. Also, the Mormon church is officially against same-sex marriages with their leaders teaching that homosexual behavior is and have always been a grievous sin, even though they’re are open to change policies.

Marie Osmond, the mother of eight, had a clear opinion about her daughter Jessica being a lesbian, which left her fans with a warm heart.

Marie Osmond was born Oct. 13, 1959 in  Ogden, Utah. She was the only girl out of nine children, and already at a young age, she would be introduced to the world of show business.

Several of her brothers already sang on national television, and it wouldn’t be long until Marie also joined in. In 1962, The Osmonds were a regular act on The Andy Williams Show, and a couple of years later, still only a small child, Marie joined in.

Marie’s mother thought her only daughter also should pursue a career in music. Brother Donny Osmond was a teen star, and soon, Marie would join him on stage.

She signed with the family music label and soon started to become a solo artist. At 12 years of age, she went in to her first recording session, an experience she recalls as ‘the most terrifying.’

‘It was a full orchestra and rhythm section. I was the only Osmond girl, what if I failed?’ she said in 2015 according to Daily Mail. ‘So I threw up! Then I went in and sang.’

In contrast to her brothers, who mostly made pop music, Marie Osmond focused on more country style music. In 1973, only 14 years of age, she released her first single, Paper Roses, and it was a huge success.

The song sent hur to the top of the top in music, becoming the No. 1 US country hit and reaching the Top 5 on the Billboard magazine pop chart. Still a teenager, Marie was a star in Europe as well with Paper Roses reaching No. 2 on the UK Singles Chart.

A year later, Marie Osmond released her debut album My Little Corner of the World, which reached the Billboard country Top 40 the same year.

The now well-known singer would take it to the next level the following year. Her talent on stage eventually led her to star alongside her brother Donny, who had great success with group The Osmonds. Now, he would team up with her sister for the TV show Donny & Marie.

The entertainment show, aired on ABC for the first time in 1975 and starred the two siblings singing and co-hosting. It became a country-wide success, with Donny and Marie always ending the show with the classic song May Tomorrow Be a Perfect Day.

Donny and Marie reunited on stage later on, spending 11 years singing and dancing onstage at the Flamingo Resort in Las Vegas, Nevada. The siblings finished their stint in Vegas in 2019.

She also has three New York Times Best-selling books and have toured all over the world performing live and also starring in Broadway performances.

The Osmonds received on single star on the Hollywood Walk of Fame in 2013, honoring siblings Alan, Wayne, Merrill, Jay, Donny, Jimmy, and of course Marie for their decades of work in entertainment.

Just like her mother, Marie would go on to have many children. Three of them are her biological children, and five adopted.

They parted ways in 1985, with Marie, one year later, marrying Brian Blosil. They had two children and adopted five more.

Marie and Brian also shared a son, Michael, whom they tragically lost to suicide in 2010. Many were surprised when she was back working only weeks following her son’s passing.

“It was so hard for me to get back on the stage two weeks after he died but I had to show my children that I chose to live,” Marie Osmond told Fox in 2013. “It was very hard and we talk about it, that’s the other thing. I know there are other families that won’t talk about it. Just as much as I lost a son, my children lost a brother and they still need to process it.”

Marie and Brian got divorced in 2007 after spending two decades together. Her fans would also get a shock later on, when she remarried her first husband Steve in 2011. She actually wore the same wedding dress as when they got married in the 80’s.

Much to the surprise of her fans, she remarried Steve, her first husband, in May 2011. One of the most shocking aspects of their ceremony was that she wore the same dress from her 1982 wedding.

In an interview with Good Morning America, Osmond revealed that she and Steve held their relationship a secret for two years. When their son Stephen Jr was getting married however, they decided to go public and later tie knot once again.

“Stephen was getting married and we realized we can’t go to our son’s wedding and not be married,” Marie told People. “So we got married a few months before he did. He joked that he never thought it would happen, but it did!”

“The thing about a second marriage is that you realize things you thought were so important, aren’t,” Marie continued. “I love being with my husband. He is the sweetest man I know. He lives to serve and really listens to people’s needs.”

One of her daughters, Rachel, is now 31 years of age. And wow, does she look very much like her stunning mother!

Rachel tied knot with Gabriel Krueger on Christmas Day in 2013. They met while she was studying at the Illinois Institute of Art.
The couple had their first child, daughter Rocket Jade, in August, 2015, and welcomed their second child, son Wolf, in July last year.

Marie posed together with her daughter Rachel and grandchild Rocket Jade in a picture published by People shortly after his birth.

Rachel’s worked as a costume designer for many years. She even got the opportunity to work with her mother and uncle Donny while the siblings were having their show in Las Vegas.

Through her Instagram page, Marie has given fans an adoring look on some of her grandchildren. In August, her daughter Brianna and son in law David Schwep had a wonderful baby girl named Mabel Amarantha.

Grandma Marie made sure to post a picture of the little girl along with a beautiful message.

“I’m overjoyed for sure as I have pondered over our precious little addition to the family. I pray continually for my grandchildren (this next generation), that they will not be afraid of the world they’re growing up in,” Marie Osmond wrote.

As mentioned earlier, Marie’s a part of the Mormon church.

In an interview with Barbara Walters in 1978, she was asked a couple of critical questions about the woman’s secondary position in the Mormon church, giving a – what some would say – unexpected statement.

“Secondary, no. But you have to remember that you need a patriarch at the head of the home, and this is the way that I feel. You need someone to run the home,” Osmond said. “The woman is equally as important but as far as speaking her mind, that should be the man’s job,”.

Bear in mind that this was in 1978, and plenty of things has happened since. However, she would get criticized when she announced that Jessica was a lesbian. That because she accepted her daughter’s sexuality as opposed to her Mormon beliefs.

Speaking to Fox, Marie Osmond said that she cried when she found out because of the struggles Jesicca might encounter in the future.

Several times, Osmond has shown her support of gay, lesbian, bisexual and transgender rights. She will always love her daughter Jessica, no matter if she’s gay or straight.

“That’s exactly right. I was so honored when Diane Sawyer named me Person of the Week, and like I told her, ‘Diane, I love my daughter,’ Marie said. “I cried when I found out when she told me she was gay when she was 17 because of the judgment, I have many friends who are gay and I didn’t want that for my child [because of the judgment].”

In June of last year, Marie once again got to celebrate big. Via her Instagram account, she posted a number of pictures saying that Jessica had gotten married with her now-wife Sara.

Marie posed together with her daughter and daughter-in-law, showing her biggest smile full of love for the beautiful wedding couple.

“Congratulations to my darling daughter Jessica and her new wife Sara! I’m so glad I got to fly in for the day to be apart of such a happy occasion! I could not love the two of you more! Welcome to our family!,” Marie Osmond wrote.

In October, Marie said Jessica was loving the life as a new wife. “I’m happy that she has someone in her life with her, you know?” Marie told Closer. “It makes me happy.”

Osmond’s been involved in plenty of charity work through the years, but she won’t leave any money to her children. In March, she revealed that all her money will go to charity.

“My husband and I decided that you do a great disservice to your children to just hand them a fortune because you take away the one most important gift you can give your children, and that’s the ability to work,” she told Fox.

In early September, it was announced that she is leaving the daytime show The Talk. However, in a statement, the beloved host wasn’t dejected.

“Also, my husband and I just dropped our last two kids off at college, we looked at each other, laughed and remembered we hadn’t been this alone together since 1982!! So, at this stage of my life, I’m looking forward to spending more time with him and visiting all the kids/grandkids,” Marie said.

We hope to see more of Marie Osmond for many years to come, and wishes her and her family all the best in the future.