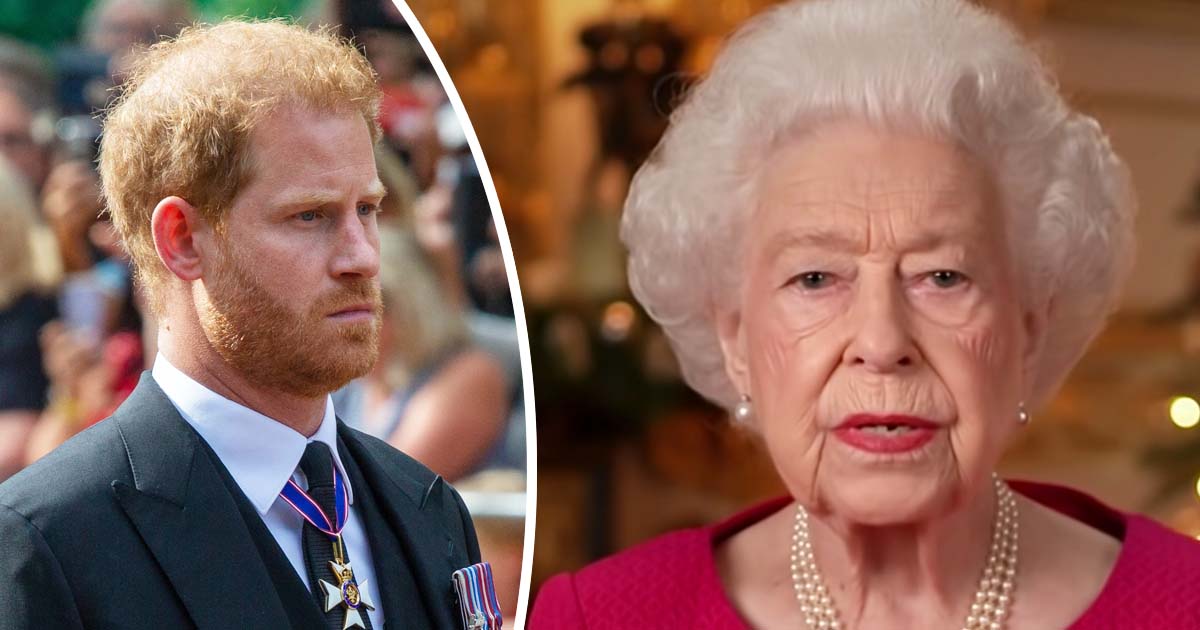 As we all know, the relationship between Prince Harry, Meghan Markle and the Royal Family isn’t at its best.

When the couple left the royals – and then went on to speak out against them – senior Buckingham Palace figures turned their backs on the Sussexes, not wanting anything to do with them. As a result, contact was cut off. Just what will happen when Harry releases his new memoir next year is a much pondered possibility.

Previous reports have stated that Harry and Meghan decided to leave the royals just days after their wedding. Now, though, a new claim suggests that it was the actions of Queen Elizabeth herself that were the final straw.

Since leaving the Royal Family, the Sussexes have opened up a rift with the Firm. As new details of Harry’s upcoming book were released recently, the risk of the detachment growing even more has undoubtedly increased.

In the press release for Harry’s upcoming memoir, Spare, publisher Random House said: “Spare takes readers immediately back to one of the most searing images of the twentieth century: two young boys, two princes, walking behind their mother’s coffin as the world watched in sorrow and horror.

“With its raw, unflinching honesty, Spare is a landmark publication full of insight, revelation, self-examination, and hard-won wisdom about the eternal power of love over grief.”

When it was announced that Harry was writing a book back in the summer, the 38-year-old said: “I’m writing this not as the prince I was born, but as the man, I have become. I’ve worn many hats over the years, both literally and figuratively, and my hope is that in telling my story – the highs and lows, the mistakes, the lessons learned – I can help show that no matter where we come from, we have more in common than we think.”

“I’m deeply grateful for the opportunity to share what I’ve learned over the course of my life so far and excited for people to read a first-hand account of my life that’s accurate and wholly truthful,” Harry added.

No one knows what Harry will communicate, reveal, accuse, or praise concerning the Royal Family in his memoir. However, according to several news outlets, it will include a number of bombshell revelations.

Time will tell what will happen next between Harry & Meghan and the Royal Family. One thing that looks certain, however, is that Harry’s upcoming book looks set to produce shockwaves. Interestingly, it seems like that has left Harry and Meghan out in the cold where Christmas is concerned.

Christmas has always been an important time for the royals. For decades, Queen Elizabeth always held tight to her yearly traditions. She used to spend much of early December at Buckingham Palace, where she gave all her staff Christmas presents and attended a carol service in the Royal Mews.

The royals have always spent the Christmas holidays at the Sandringham House in Norfolk. Queen Elizabeth would travel by train to her country estate. From there, she sent out about 750 Christmas cards every year to her family, friends, and other members of the royal household and government officials.

Some might think that Christmas with the Firm would mean massive Christmas decorations, a tree some 30-feet tall, and their own choir to sing on command. Perhaps that is what will happen this holiday season, but when the Queen was alive, that wasn’t the case at all.

Elizabeth’s former chef, Darren McGrady, revealed that she used to place several Christmas trees around the house at Sandringham. Most of them were real trees, but the one tree in the living room at the Norfolk estate was artificial – the Queen had owned it for more than 30 years.

“The Queen is not lavish, so the décor is minimal,” McGrady told Good Housekeeping in 2016.

“The royal family has a large Christmas tree and a large silver artificial tree in the dining room, which is about 30 years old.”

Like many other families worldwide, the Royal Family exchange presents on Christmas Eve after enjoying afternoon tea.

These days, with many young children and grandchildren, royal Christmases are certainly more hectic and louder than before. Of course, that’s what Christmas is about!

According to a US Weekly source, Prince William and Kate Middleton are keen on celebrating Christmas with their family at Sandringham. This is because they want to give their children, Prince George, Princess Charlotte, and Prince Louis, a yearly family tradition – not only because it’s fun, but because the couple want to give their kids as “normal” a life as possible.

“It’s important to them that their kids share childhood traditions like their school pals,” the insider told Us Weekly in 2018.

This year, Charles will celebrate Christmas as King for the first time. Elizabeth used to hand out presents to her household at Buckingham Palace and Windsor, as well as give her staff Christmas pudding.

The Royal Family has a formal dinner on Christmas Eve, often including Norfolk shrimp and lamb.

At 10 p.m., the Queen always signaled that it was time for the women to go to bed, as the men traditionally enjoyed a brandy. At least that was custom until 2021, when Prince Philip passed away.

Upon waking up, the family enjoys a classic English breakfast consisting of eggs, sausages, bacon, and beans. Then, after the traditional visit to St Mary Magdalene Church, they eat a Christmas lunch, the main course of which being a roast turkey.

US Weekly has previously reported that the family members have also upheld Henry VII’s tradition of “weighing in before and after Christmas lunch.”

At 3 p.m., the Royal Family sits down to watch the annual Christmas speech on television – Queen Elizabeth’s annual speech was a highlight for many. This year will mark King Charles’ first time doing the speech.

Millions will tune in for the speech, though one important couple who may skip it are Prince Harry and Meghan Markle.

It’s been rumored that the couple declined Charles’ invite to spend Christmas in the UK. Instead, according to royal author Katie Nicholl, they’re preferring to stay in California.

Harry and Meghan infamously left the Royal Family back in 2020 – sources have said the decision was made only days after their marriage. In any case, the Sussexes seemed to have made the call as early as Christmas, 2019, when Queen Elizabeth delivered her speech.

Each year, while the Queen addressed the nation on Christmas, she was surrounded by photos of her family members. In 2019, there were pictures of her father, King George VI, on display, as well as then-Prince Charles, Camilla, Prince Philip, and of Kate and William alongside their three children.

Harry & Meghan “not a fundamental part” of royal future

Notably, Harry and Meghan did not feature. This, according to authors Omid Scobie and Carolyn Durand of the biography Finding Freedom, was “the final straw” for the Sussexes.

At the time, Harry and Meghan had already started transitioning to a non-royal life. But ‘photo-gate’, as it was dubbed in a number of tabloids, was the final nail in the coffin.

Scobie and Durand claim that Harry and Meghan felt they “had long been sidelined by the institution and were not a fundamental part of its future.”

“One didn’t have to look further than the family photos displayed during the Queen’s Speech on Christmas Day,” they wrote in the biography Finding Freedom.

“Palace sources insisted that the photos were chosen to represent the direct line of succession, but for Harry and Meghan, it had been yet another sign that they needed to consider their own path.”

At the same time, Harry and Meghan were not totally forgotten in the Christmas Day speech of 2019. Never-before-seen footage of Queen Elizabeth and Prince Philip meeting Archie for the first time was included for the address.

According to Andersen, the Queen decided to remove their photo before making her speech..

“(The queen) loves all of her children and grandchildren, there’s no doubt about that,” he told Today. “But when it comes to ‘The Firm,’ as they call the royal family, she is all business.”

Andersen added: “That’s why she wouldn’t allow Harry and Meghan to remain as kind of part-time royals on the terms that they wanted.”

As Christmas 2022 approaches, Harry and Meghan have been said to have declined the invite to spend the holidays at Sandringham with the Royal Family, though another royal expert claims that it’s potentially more a case of the family not wanting them there.

It’s been reported that Harry and Meghan’s documentary series will drop on Netflix in December. And as one can imagine, the risk of it being negatively received by the rest of the Firm is quite significant.

With that in mind, Levin argues that Harry and Meghan are afraid of the Royal Family’s reaction, and this is why they have chosen not to travel back to the UK for Christmas.

“It’s been said that they’re not coming but it [is] also I think on what the documentary is like whether or not they would be invited at all,” Levein told The Sun, adding a shocking claim that “it could be a case where the royals don’t want them there after the documentary.”

“It’s up [to] the Sussexes on whether they want their children to know what their father’s family is like – but also it could be a case where the royals don’t want them there after the documentary,” she added.

Moreover, Levin says that Charles, Camilla, and the rest of the royals “want to make it a very positive day after the Queen’s death and I think the Sussexes presence would most certainly dampen that.”

“I think will be a huge relief for the rest of the family.”