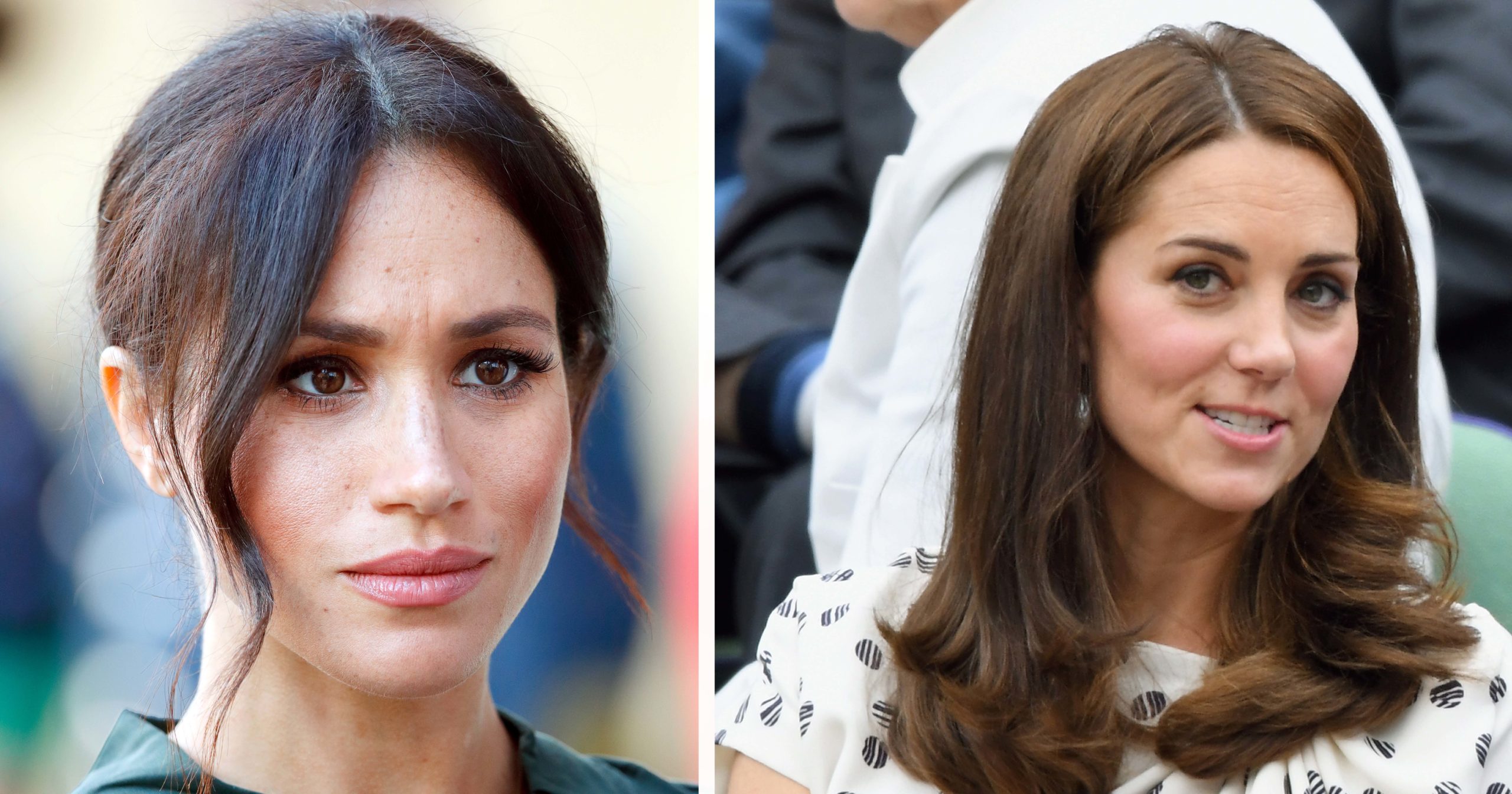 It goes without saying that Meghan Markle’s relationship with the British Royal Family has been icy for years. It was hardly helped when she and Prince Harry left the Firm for pastures new, and then dealt its biggest blow yet after Meghan’s bombshell allegations towards Charles and other family members, including Kate Middleton.

Before the Sussexes’ exit from the UK, Meghan and Kate seemed to get along. In 2019, Harry and Meghan welcomed their firstborn child, son Archie, and Kate was over the moon for the couple.

However, it may have been as early as this point that their relationship began its downward spiral. That’s at least according to new reports that suggest Meghan had a clear answer to Kate’s question about whether she was allowed to take the first picture of their newborn son or not.

In February of last year, Harry and Meghan sat down with TV host Oprah in the garden of her home in Montecito, California. There, they proceeded to spill the truth about their experiences within the Royal Family. Suffice to say the statement they made changed things forever.

Harry and Meghan were practically shut out of the Royal Family after that. If reports are to be believed, none of the royals the wanted anything to do with them.

Meghan didn’t hold back in the interview, revealing that then-Prince Charles had refused to take Harry’s phone calls.

However, the most shocking part occurred when Meghan claimed conversations had taken place within the palace concerning how dark Archie’s skin would be.

She declined to name the specific person who had made the comment, adding only: “I think that would be very damaging to them.”

These days, Meghan’s relationship with several royal family members remains strained. One individual in particular that the former actress had a hard time with from the beginning – and vice-versa – was Kate Middleton.

Authors Omid Scobie and Carolyn Durand claim in their book Finding Freedom that the two were not exactly feuding at the start.

According to them, the two royals just didn’t know each other well enough.

“Meghan would agree with the assessment that the duchesses were not the best of friends,” they wrote. “Their relationship hadn’t progressed much since [Markle] was Harry’s girlfriend.”

Moreover, Durand and Scobie add that Kate didn’t make a significant effort to welcome Markle into the family, at least not in the way people might have expected.

Meghan had hoped that Kate would take her under her wing and guide her through all the new things that someone coming from “outside to the Firm” should know about. But that, the authors claim, never happened.

“Meghan was disappointed that she and Kate hadn’t bonded over the position they shared, but she wasn’t losing sleep over it,” Durand and Scobie wrote in Finding Freedom, adding that “Meghan would far rather have had Kate check in on her during the most difficult times with the press.”

Before Harry and Meghan’s wedding, things heated up between Kate and Meghan. She stated that Kate Middleton had made her cry over the flower-girl dresses on her wedding day – which directly contradicted earlier claims made by the tabloids.

“It really hurt my feelings. It was a really hard week of the wedding. And she was upset about something, but she owned it, and she apologized. And she brought me flowers and a note, apologizing,” Meghan said.

Harry & Meghan – time in the UK after marriage

“I think so much of what I have seen play out [in the media] is this idea of polarity, where if you love me, you don’t have to hate her. And if you love her, you don’t need to hate me,” she added.

Following their royal marriage, Harry and Meghan lived at Kensington Palace for a short while. The residence was Prince William and Kate Middleton’s home at the time.

“It’s in the grounds of Kensington Palace, and it’s quite small,” royal author Tom Quinn said. “It’s tiny compared to the enormous double apartment that Kate and William have.”

A short while later, the couple moved into their private residence. Though this was supposed to be a happy period, things turned ugly quickly.

Harry and Meghan moved into Nottingham Cottage, not far from William and Kate. It was then that the relationship between the two couples soured. According to Tom Quinn, this happened for several reasons.

Meghan reportedly had difficulty reconciling that Kensington Palace was reserved solely for William and Kate. At the same time, a senior royal aide told her she’d never be “in the first division.”

“It was being pointed out to them in no uncertain terms that they weren’t in the first division because that place is held by William and Kate. Inevitably that led to friction,” Quinn claims.

After a short stay, Harry and Meghan moved into Frogmore Cottage in Windsor, where they lived until making the decision to step back from life as working royals.

Harry and Meghan’s royal duties officially ended on March 31, 2020. By that time, the Sussexes’ had already welcomed their firstborn child, Archie. As of today, the family of three has become four after the arrival of their daughter, Lilibet.

When Archie was born, the Royal Family was, of course, delighted for Harry and Meghan. That also went for Harry’s brother, William, and Kate Middleton, and the now-Princess of Wales reportedly wanted to show her appreciation by asking about a very special assignment.

Royal expert Neil Sean revealed that Kate offered to take the first newborn pictures of Archie. However, he claims that Meghan turned it down, instead wanting to “hire a photographer” for the job.

“Meghan turned that opportunity down flat”

“This was a very special gesture from the now-Princess of Wales to Meghan Markle when she had her first child, Archie,” Sean said in a Youtube video, as reported by Express. He added that Kate offered to “take the personal picture of baby Archie” after other professional photographers had “commended” her portfolio.

“According to that good source, apparently, Meghan turned that opportunity down flat,” Sean continued. “And as ever, we have to say allegedly [but] we’re not quite sure why [Meghan turned Kate’s offer down].

“You didn’t need to hire a photographer, as Harry and Meghan did.”

Kate Middleton has been a passionate photographer all her life. Earlier this year, she got a job as the photographer of Camilla’s guest edition of Country Life Magazine, and so took photographs of her in the gardens of Ray Mill House in Lacock, Wiltshire.

Camilla praised Kate as “an extremely good photographer.” In the beginning, it was her grandfather who sparked her interest in photography.

“Her grandfather was a very good photographer,” Williams said. “When she was a child, he would show her his slides. It was him who taught her how to take photographs.”

In any case, we can assume that the relationship between Meghan and Kate isn’t at its best. Moreover, it appears as though it may have hit rock bottom at Queen Elizabeth’s funeral.

Kate said to have tried mend relationship with Meghan

The Duchess and Kate did not share a single word with one another, insiders claimed. Now, new reports suggest that Harry and Meghan have no plans on returning for the next big holiday, Christmas.

Of course, the fact that Kate and Meghan reportedly didn’t talk during the Queen’s funeral service shouldn’t come as a big surprise.

At the same time, it appears that Kate tried to mend the relationship prior the funeral. A US Weekly source said that Kate felt that there was a “misunderstanding” regarding her and Meghan’s relationship. After Lilibet was born in 2021, she tried her best to repair the relationship.

“Kate has been reaching out to Meghan a lot more sense [Lilibet] was born. She’s sending [notes and] gifts and trying to build up a relationship,” the source said.

In December, Kate and William are set to travel to the US, where they’ll visit New York and Boston to attend the Earthshot Prize Innovation Summit.

William founded the Earthshot Prize in 2020. It became an independent charity earlier this year, with William as president.

William & Kate’s upcoming trip to the US

The Prince was supposed to attend the Earthshot Prize innovation summit in New York last month. Sadly, he had to cancel because of the Queen’s sudden passing.

“Protecting the environment was a cause close to my grandmother’s heart. And I know she would have been delighted to hear about this event and the support you’re all giving our Earthshot finalists, the next generation of environmental pioneers,” William said in a recorded message in September.

The second Earthshot Prize awards ceremony is set to be held in Boston in December. According to US Weekly, Kate Middleton will have another big project for the trip; mending the relationship with Meghan.

Though William and Kate will be on the east coast – while Harry and Meghan live on the west coast – Kate plans to extend an “olive branch” to Meghan in a bid to reunite William and Harry and heal the rift. This is, as per a source, what both the late Queen Elizabeth and Princess Diana “would’ve wanted.”

“Harry and Meghan are knee-deep with their hectic schedules, but Meghan is willing to put in the effort as long as dates don’t clash,” the source said.

Despite the ongoing rift with the royals, life goes on as usual for Harry and Meghan. They currently live in their multimillion-dollar mansion in Montecito, California, about two hours outside of Los Angeles, which has been described as “Fort Knox.”

“I see the world differently”

The couple is busy raising their two children, Archie and Lilibet. While Harry and Meghan have said that it has been fantastic to witness their children growing and learning new things, it has also been a demanding time.

Meghan and Harry welcomed their firstborn child, Archie, on May 6, 2019. Then on June 4, last year, Lilibet was born.

On her podcast, Archetypes, Meghan described how her life changed forever with Lilibet’s birth. She said she would teach her daughter to be a “full-fledged interesting, curious, kind, strong, all the things, human being.” And also that she wants Lilibet to be a woman “with a voice.”

Please, share this article if you also enjoy reading about the royals!