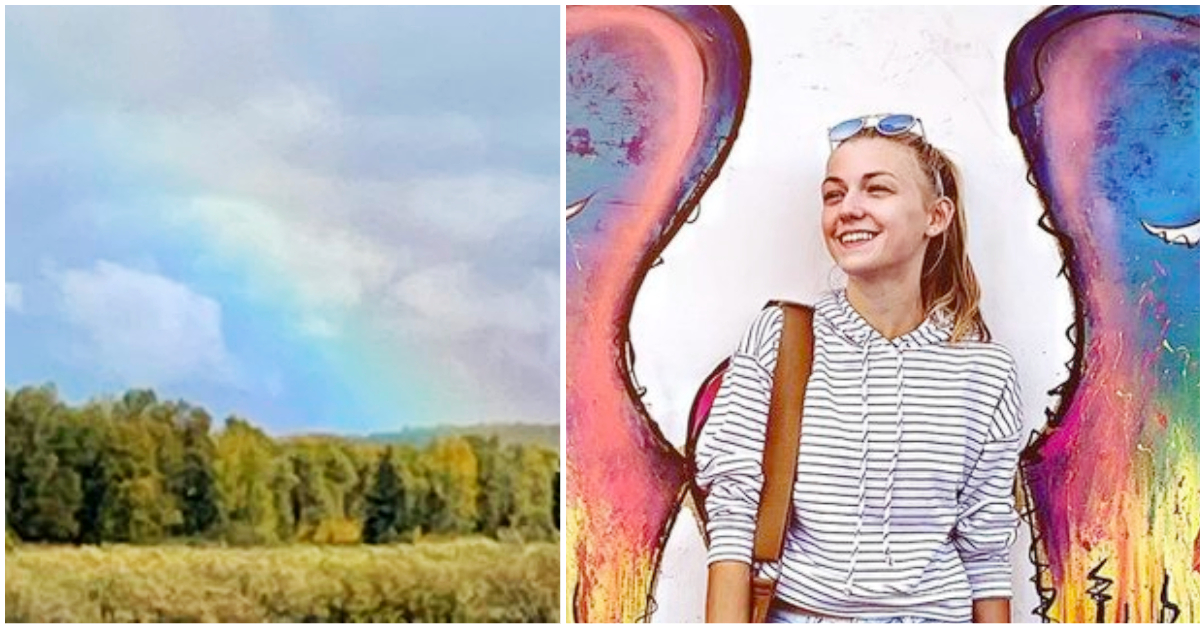 People around the world have been following the story of Gabby Petito, the 22-year-old woman who was reported missing after a cross-country van trip with her boyfriend.

The case took a heartbreaking turn on Sunday, after a body was found in Wyoming that was “consistent with the description” of Petito. The body was later confirmed to be that of the young YouTuber, with a coroner ruling the manner of death as homicide.

As Gabby’s family and countless others are mourning the tragic loss, an unlikely sight has provided some comfort, as if a sign from above.

Soon after Gabby’s remains were discovered in Bridger-Teton National Forest, a rainbow appeared in the sky:

There is obviously a simple scientific justification for the rainbow — it’s just sunlight refracting off rain droplets, like any other rainbow, and one could just write it off as a coincidence.

But still, others have chosen to find meaning and significance in the rainbow appearing right above where Gabby was found. The rainbow is a symbol with many cultural meanings, from a sign of peace to a representation of a bridge between Earth and heaven.

“What a blessing,” one woman replied to the story on Twitter. “Not finding her is worse than knowing. She sent a rainbow for her family to know in ‘spirit’ she will always be close when a rainbow is spotted.”

“I believe rainbows represent a soul that has passed, trying to let everyone know they are fine, and with God,” another woman wrote. “Prayers to her family.”

Yesterday, the body was officially identified as Gabby’s, though a cause of death has not – at the time of writing – been given.

“I would like to extend sincere and heartfelt condolences to Gabby’s family,” an FBI supervisor involved with the case said, according to CBS News. “As every parent can imagine, this is an incredibly difficult time for the family and friends. Our thoughts and prayers are with them. We ask that you all respect their privacy as they mourn the loss of their daughter.”

The family’s lawyer, Richard B. Stafford, asked for “decorum and sensitivity” to the family to “allow them to grieve.”

The victim’s father, Joseph Petito, shared a photo of Gabby, posing in front of a mural of angel wings, saying she “touched the world.”

While Gabby’s family mourns for their daughter, the investigation into her death remains ongoing.

Gabby’s boyfriend Brian Laundrie, with whom she was on the trip, is a “person of interest” in the case. Laundrie had returned to their home in North Port, Florida without Gabby on September 1.

While on their trip, the couple had been stopped by police after a third party reported a domestic violence incident.

Bodycam footage showed that Gabby was emotionally distraught, and the couple said they had been fighting over “personal issues.” No charges were brought, but the couple were separated, with Laundrie being given a hotel for the night.

Laundrie has been silent on Pepito’s disappearance and death. He has been missing for over a week, and investigators are searching for him as a person of interest in the case.

On Monday, FBI investigators got a search warrant to search his parent’s home in North Port, and reportedly took a number of items in as evidence, including a Fort Mustang convertible.

The FBI also said that while the search was concluded, the investigation is still ongoing.

Our thoughts and prayers continue to be with the family of Gabby Petito.

We hope the investigation brings justice and closure to this heartbreaking story.