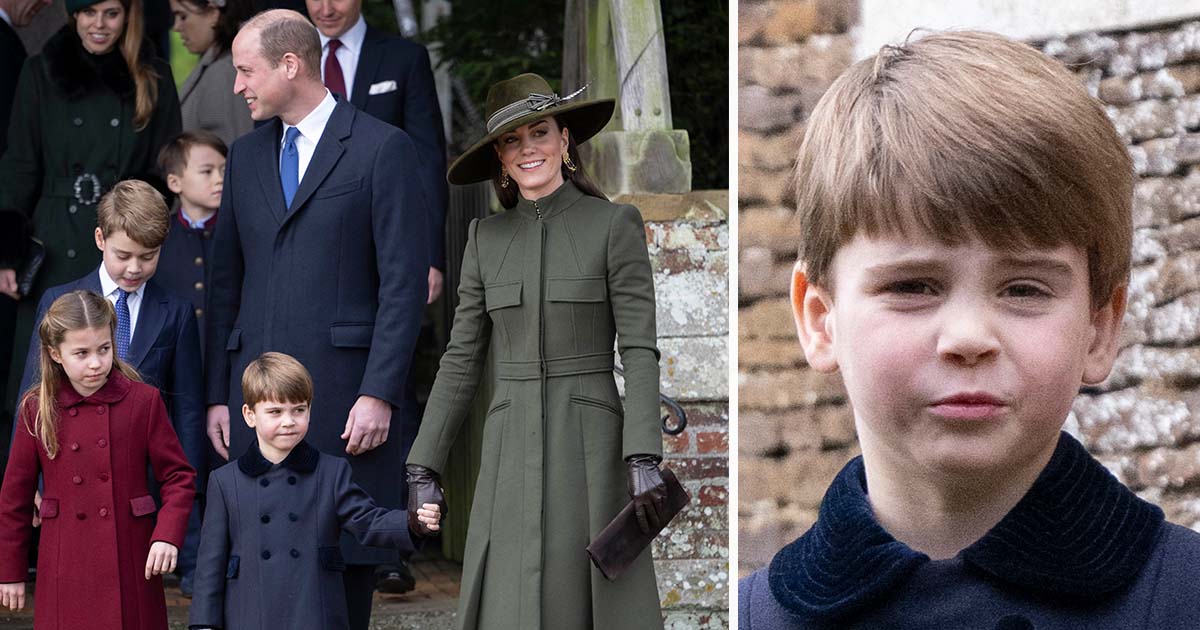 Young Prince Louis has just celebrated his fourth Christmas. The heir to the British throne, alongside siblings Prince George and Prince Charlotte, all appeared with parents Prince William and Kate Middleton during the Christmas Day Service at St Mary’s Church.

It’s well known that Prince William and Kate Middleton have done everything possible to give their children a normal childhood. That includes everything from celebrating a “normal” Christmas to ordinary routines at home.

However, a new picture of Prince Louis reportedly has royal fans concerned. The 4-year-old appeared outside the church on Christmas Day in an outfit that royal fans had a lot to say about indeed …

The royals have always spent the Christmas holidays at the Sandringham House Estate in Norfolk. Queen Elizabeth would travel by train annually to her country estate. From there, she sent out about 750 Christmas cards yearly to her family, friends, and other royal household members and government officials.

Some might think that Christmas with the Firm would mean massive Christmas decorations, a tree some 30 feet tall, and their own choir to sing on command. Perhaps that is what will happen this holiday season, but when the Queen was alive, that wasn’t the case.

No, Elizabeth’s former chef, Darren McGrady, revealed that she placed several Christmas trees around the house at Sandringham. Most of them were real trees, but the one tree in the living room at the Norfolk estate was artificial – the Queen had owned it for more than 30 years.

“The Queen is not lavish, so the décor is minimal,” McGrady told Good Housekeeping in 2016.

“The royal family has a large Christmas tree and a large silver artificial tree in the dining room, which is about 30 years old.”

How King Charles has decided to continue his mother’s tradition of, for example, the large silver artificial tree is not revealed. However, it is a good guess that they will honor their beloved late mother, grandmother, and great-grandmother, the Queen.

These days, with many young children and grandchildren, royal Christmases are certainly more hectic and louder than before.

According to a US Weekly source, William and Kate are keen on continuing to celebrate Christmas with their family each year at Sandringham.

They want to give their children, Prince George, Princess Charlotte, and Prince Louis, a yearly family tradition – not only because it’s fun, but because the couple wants to give their kids as “normal” a life as possible.

“It’s important to them that their kids share childhood traditions like their school pals,” an insider told Us Weekly in 2018. “They’re going all-out to make it extra special.”

Interestingly, this year’s Christmas didn’t include staying with grandpa King Charles and Camilla for the entire holiday season.

According to royal expert Jeremy Archer, William and Kate were looking to stay at Sandringham for Christmas but then travel to Berkshire to spend New Year’s Eve with Kate’s parents.

Reportedly, though, William and Kate decided not to attend another traditional Christmas activity of the Royal Family.

Another royal expert, Jennie Bond, believed that the Prince and Princess of Wales would Sandringham after the significant Christmas celebrations were over.

“The younger generation might want to do their own thing for at least part of the time,” she said. “So they may just have Christmas lunch [at Sandringham].”

Bond added: “I think the King’s Christmas plans might be up in the air a bit. The younger royals will probably want to spend time with their own families, so I think the two or three-day celebrations of the past may, indeed, be a thing of the past.”

“While I imagine there will be a gathering at Sandringham, whether it will be quite as extended as it used to be with the Queen and with quite as many people, I’m not sure.”

As mentioned, this Christmas will be the first without the Queen’s presence. Since she passed away in September, the Royal Family has been mourning. As the holiday season approached, it was widely accepted that the emotions would be flowing once more. Indeed, former royal butler Grant Harrold agreesd.

Harrold, who previously worked for King Charles and Camilla for seven years, said it would be a bittersweet time for the family. However, he believed that Charles and the others would always cherish and remember the joy the Queen gave in her many years of celebrating Christmas.

“I think for them it will be very emotional this year and I’ve no doubt there are tears that will be shed on the day or the night before because they will be remembering her,” Harrold told the Mirror.

“But I’m sure as well it will be a fun time for the youngsters, and it will also carry on how the Queen would have wanted it to.”

Upon waking up on Christmas day – after having a formal dinner on Christmas Eve, often including Norfolk shrimp and lamb – the Royal Family is said to enjoy a classic English breakfast consisting of eggs, sausages, bacon, and beans.

Then, after the traditional visit to St Mary Magdalene Church, they eat a Christmas lunch, the main course of which is a roast turkey.

US Weekly has previously reported that the family members have also upheld Henry VII’s tradition of “weighing in before and after Christmas lunch.”

At 3 p.m., the Royal Family sits down to watch the annual Christmas speech on television – Queen Elizabeth’s annual speech was a highlight for many. This year marked King Charles’ first time doing the speech. In the address, he made sure to thank the country for their tremendous support after the Queen’s passing.

Charles said: “I am standing here in this exquisite Chapel of St George at Windsor Castle, so close to where my beloved mother, the late Queen, is laid to rest with my dear father. I am reminded of the deeply touching letters, cards and messages which so many of you have sent my wife and myself and I cannot thank you enough for the love and sympathy you have shown our whole family.”

“While Christmas is, of course, a Christian celebration, the power of light overcoming darkness is celebrated across the boundaries of faith and belief,” he added.

“So, whatever faith you have, or whether you have none, it is in this life-giving light, and with the true humility that lies in our service to others, that I believe we can find hope for the future.”

King Charles ended his speech by saying, “Let us, therefore, celebrate it together and cherish it always. With all my heart, I wish each of you a Christmas of peace, happiness, and everlasting light.”

Christmas at Sandringham is a private event to which only the most senior of the Royal Family are usually invited. As mentioned, the traditional visit to St Mary Magdalene Church is always a special opportunity for the public to see the royals in the midst of their Christmas spirit.

There was no change to that this year, as Prince William, Kate, their children, King Charles and Camilla, the Queen Consort, among others, walked to church.

For Prince Louis, the day was very special, as it was the first time royal fans saw him at the Christmas walkabout. Yet as much as people enjoyed seeing him, there was one detail of his attire that left certain individuals in a critical mood.

The four-year-old prince donned a blue wool coat and purple shorts. The fact that his legs were exposed to the chilly December weather left people concerned that Louis would be cold. A few even speculated that it might increase the risk of him falling sick.

“Prince Louis looks adorable except for the shorts,” one person wrote on Twitter, as reported by The Sun.

“Absolutely ridiculous to use such an outdated and classist style convention on a freezing day. People are sitting with blankets.”

Another person added: “Why is Louis wearing shorts on such a cold day?”

“Poor Prince Louis in the cold in lil shorts,” a third wrote.

So why was Prince Louis wearing shorts? Well, as with many other elements of royal life, it’s all about tradition.

Etiquette expert William Hanson said the outfit is a tradition dating back to the 16th century.

“It’s a very English thing to dress a young boy in shorts,” he told Harper’s Bazaar. “Trousers are for older boys and men, whereas shorts on young boys is one of those silent class markers that we have in England.”

“Although times are slowly changing, a pair of trousers on a young boy is considered quite middle class – quite suburban. And no self-respecting aristo or royal would want to be considered suburban,” Hanson added.

And this isn’t the first time royal fans have been left concerned over the royal children’s outfits.

Earlier this year, when Prince George accompanied his parents for the Wimbledon men’s final, he was dressed in a blue suit and tie.

The match lasted some three hours, giving photographers plenty of time to get some great shots of Prince George as he took into action.

He was laughing, picking his nose, having conversations with his parents – it largely looked like he enjoyed watching two of the best players in the world – Novak Djokovic and Nick Kyrgios – battle it out on the legendary Center Court.

However, pictures appeared to show George in discomfort as well. Temperatures in London soared to 28C (82F) on the day, and the young prince was clearly feeling the heat.

Royal fans took to Twitter to share their thoughts. “Poor child having to wear a suit in this hot weather,” one user wrote.

“Why do they dress him in a suit and tie and in this heat. He’s a boy, not a grown up,” another stated.

A third said: “Poor Prince George, he must be boiling in that suit.”

What do you think of Prince Louis wearing shorts in December? Please share this article on Facebook and give us your opinion!