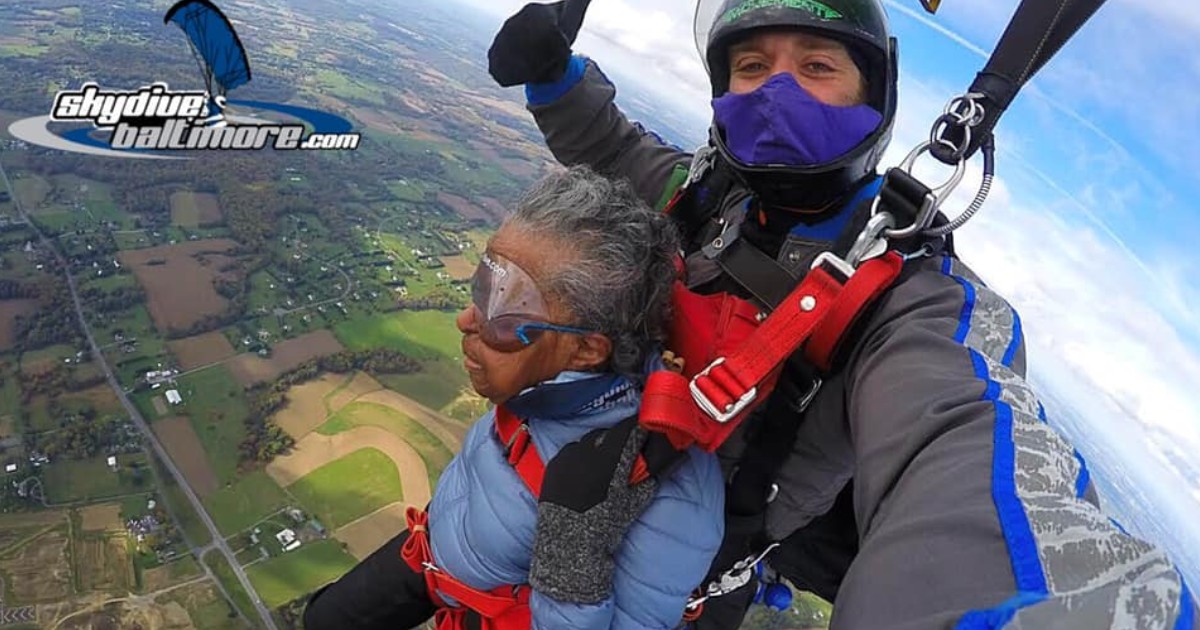 I can guarantee you if you ask any of your friends or family for their bucket list, at least one of them will have “go skydiving” on it.

It’s one of those things that doesn’t appeal to everyone, but for those that it does, it’s the thrill of a lifetime.

For Millie Bailey, it was exactly that – the thrill of her life.

The 102-year-old WWII veteran wanted to go skydiving for more than a decade, but it wasn’t until recently that she finally had the opportunity to jump with Skydive Baltimore.

According to the skydiving company, Bailey had wanted to go skydiving ever since she saw former President George H.W. Bush skydive for every fifth birthday.

At 102 years old, she finally got to cross it off her bucket list!

“… At one point when we were tumbling in the air, I felt like I was by myself. I thought, ‘Where did the paratrooper go?’”

Bailey was born in 1918 in Washington, D.C., but grew up in Tulsa, Oklahoma. When she was in her mid-twenties she joined the U.S. Women’s Army Auxiliary.

“I was in charge of the unit, it’s called WAC detachment. I was the commander in charge,” she told WJZ.

After receiving several awards from the Army, she was honorably discharged as a first lieutenant in 1946 and went on to work for the Veterans Affairs and the Social Security Administration before she retired in 1975.

Once she retired she didn’t slow down, she continued to volunteer her time supporting causes local to where she lives in Howard County, Maryland.

Not only did she send care packages to troops, but for 21 years she raised $10,000 annually for schoolchildren within the county.

“I try every day to do something for someone else,” she said.

While Bailey was able to cross skydiving off her bucket list, she told WJZ she still has one more item before it’s complete and that’s to meet Barack and Michelle Obama.

What a life she has lived! Thank you for all you have done for your country and your community.