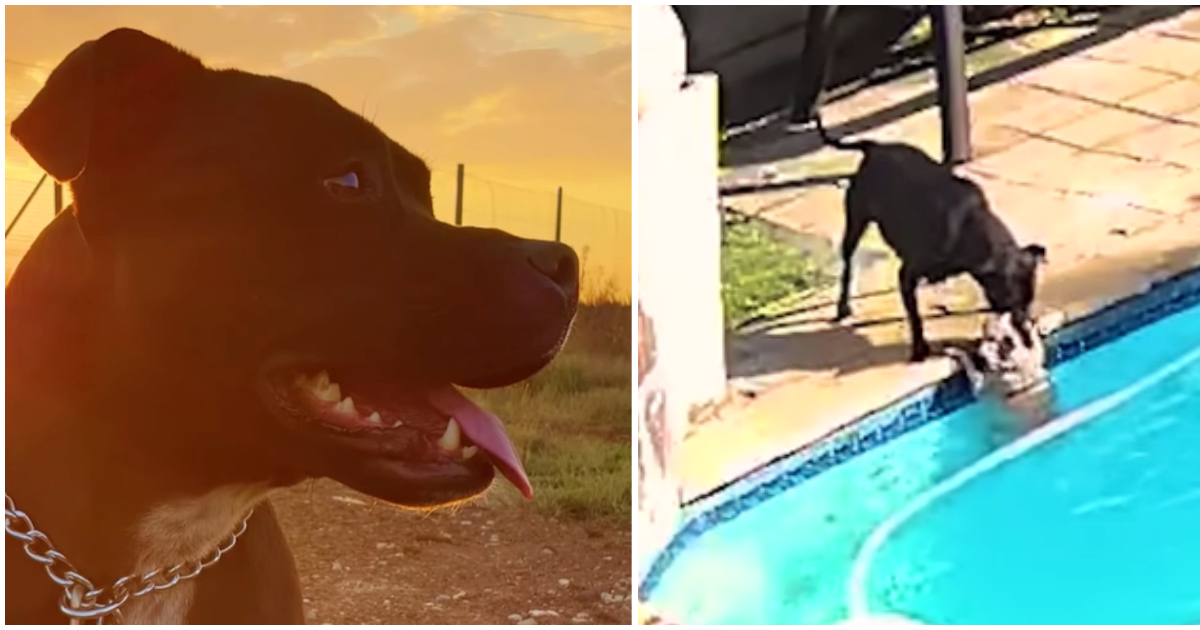 We’ve seen many stories of rescued dogs becoming the ones who do the rescuing. These smart pets have such great instincts, always able to tell when their loved ones are in danger and stepping up to save the day.

Like one dog, who recently saved his little dog friend after he got trapped in a pool. The dog might’ve drowned if not found in time, but luckily his hero was there to come to the rescue.

Byron Thanarayen and his wife Melissa, from Boksburg, South Africa, are the owners of two dogs, a Tom Pom named Chucky and a Staffie named Jessie, according to Times Live.

They returned home one day, and noticed that Chucky was wet, which they thought was odd, as the dogs aren’t in the habit of going into their pool.

But security footage revealed a dramatic scene: the Toy Pom had accidentally fallen into the pool while walking by, and was struggling to get out.

The tiny dog kept his head above the water, but struggled as he couldn’t get over the ledge. The dogs’ owners weren’t home at the time.

“It was heart-wrenching to watch,” Byron told Times Live. “We still struggle to watch that video today, just thinking of what could have happened.”

Luckily, an unlikely hero stepped up to save the day: Jessie discovered her fellow dog in the pool, and quickly stepped into action to save him.

The Staffie is seen running to the sides of the pool, trying to get Chucky out, but it’s no easy task. According to the video, the rescue took repeated attempts over the course of 34 minutes.

Finally, Jessie was able to pull the smaller dog out of the pool, and together the two dogs headed back to the house.

Watch the incredible rescue video below:

It’s easy to imagine how things could’ve gone tragically wrong if the poor dog had been all alone, and the couple is grateful that Jessie was there to save the day.

Jessie, 7-years-old, is a rescue dog, adopted from the Boksburg SPCA four years ago, after her previous owners returned her to the shelter.

“They said she didn’t get along with their other dogs, but I have not experienced this,” Byron said. “She got along with our other two dogs from the word go.”

“Jessie is the best dog we have ever had.”

But to ensure that this never happens again, the couple says they are installing a pool cover.