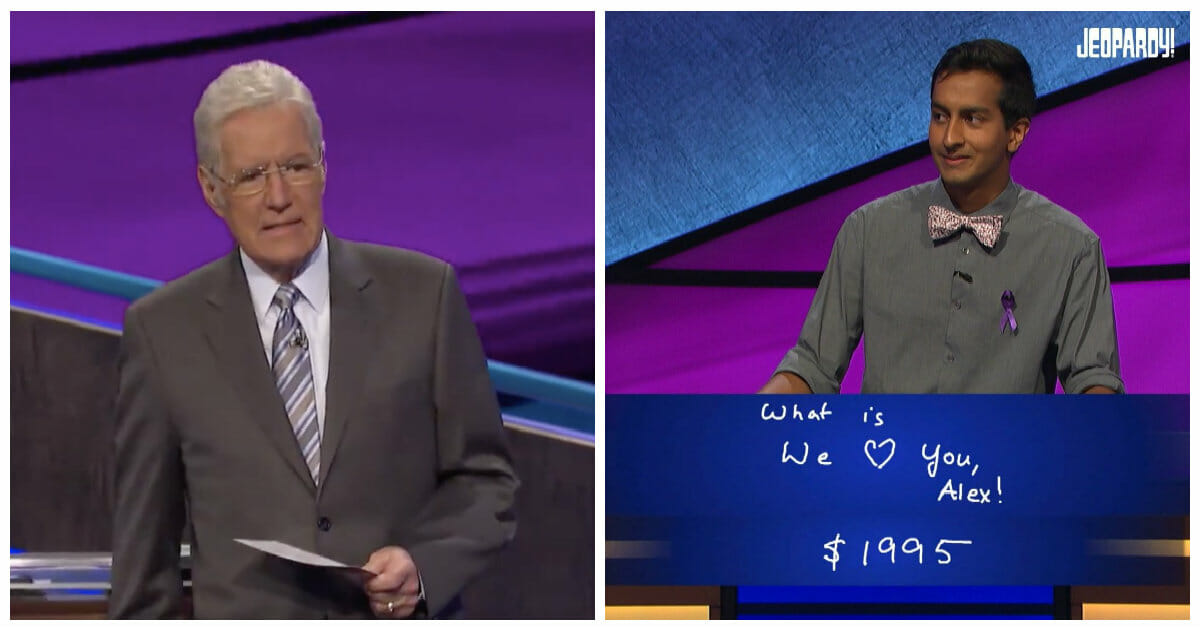 Legendary Jeopardy! host Alex Trebek has been fighting a tough battle with stage IV pancreatic cancer for the past few months.

Defying the low survival rates, he’s been hanging tough, continuing to host the show he’s hosted for 35 years even while undergoing chemotherapy.

He’s been motivated by the love of his friends, family and Jeopardy! fans, who have reached out to offer their support through the tough times.

But one contestant’s sweet gesture really struck a chord, causing the usually straight-faced Trebek to get emotional on the show.

Jeopardy! is currently airing its annual two-week “Tournament of Champions,” in which top-earning players from the past season come back to compete against each other.

The category was “Famous Phrases,” and the contestants revealed their answers. Dhruv, it turned out, did not have the correct response… instead, he used his answer to pay a heartfelt tribute to the host.

It was a sweet, simple gesture—but it clearly meant a lot to Trebek.

“That’s very kind of you, thank you,” Trebek said… and it was clear he meant it. He was visibly emotional, and took a moment to hold back tears.

It was an unexpected show of emotion for Trebek, who virtually never breaks from his cool, straightforward hosting style. Even during his announcement videos and interviews regarding his health, he’s never broken.

But the contestant’s “we love you” was enough to cause a lump in his throat… although in typical Trebek fashion, he quickly kept the game moving: “Cost ya $1,995, you’re left with $5,” he announced.

Dhruv’s two competitors both gave the correct response. It’s possible that Dhruv knew it, too, but he was trailing enough that winning was a longshot. (The win went to Emma Boettcher, the former champ who ended James Holzhauer’s record-breaking run.)

Instead, he gave up his chance at advancing to the finals to write his tribute… and most importantly, did it in the form of a question.

“Alex had just shared with us that he was reentering treatment for pancreatic cancer,” he shared on Twitter. “We were all hurting for him so badly.”

The heartwarming moment went viral. Many other contestants chimed in, praising Dhruv and sharing in the sentiment.

It’s clear that the Jeopardy! contestants all have a great respect and admiration for Trebek, and as he’s fought cancer many have done things to show their support.

And throughout the Tournament of Champions, contestants have been wearing purple ribbons for pancreatic cancer—not just in honor of Trebek, but also for Larry Martin, the Teachers Tournament champion who passed away this year of the same disease.

It’s inspiring to see such an outpouring of love for Alex Trebek! Thank you to all the fans and friends of the show who have given their support.