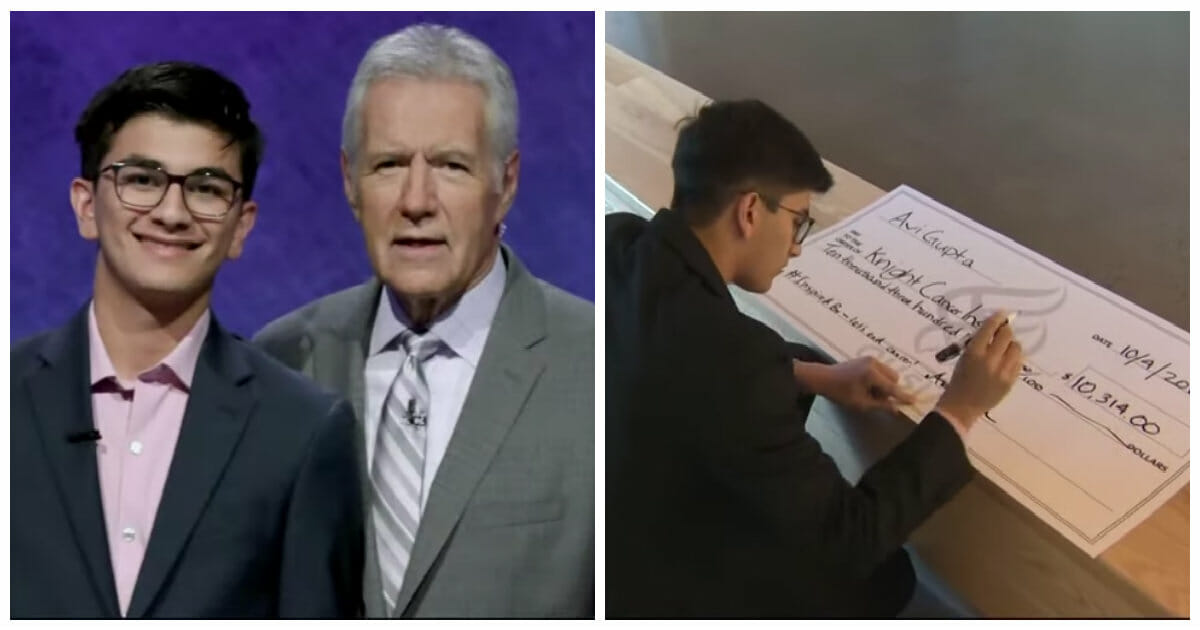 Jeopardy! fans around the world were heartbroken by Alex Trebek’s announcement in March that he was diagnosed with stage IV pancreatic cancer, a disease with a frighteningly low survival rate.

In the months since, Trebek has continued to host the show while undergoing chemotherapy. While he’s had his ups and downs along the way, he has always said he’s deeply moved and inspired by the love and support of his family and Jeopardy! fans around the world.

That also goes for former contestants of the show, who have reached out with their own support (even Watson, the IBM computer!) And now one young champion has just made a very generous donation in Trebek’s honor.

“I was inspired to give by Alex Trebek, the host of Jeopardy! and someone I’ve looked up to my whole life,” Avi says in a video posted by OHSU Knight.

“I’m honored to be able to make this donation to the Knight Cancer Institute to support him and the millions of others suffering from pancreatic cancer across the world.”

It’s a very generous donation from the teen, who won $100,000 in prize money as the Teen Tournament champ. He is currently a freshmen and Columbia University.

Other contestants have made donations to pancreatic cancer causes in honor of Trebek as well. James Holzhauer, the contestant who dominated the show last season with a 32-game winning streak, donated over a thousand dollars to a pancreatic cancer walk in his hometown.

The show is currently airing its annual Tournament of Champions, with former contestants returning to the show—and pancreatic cancer awareness has been at the forefront. The competing champions are wearing purple ribbons to show their support (November is also Pancreatic Cancer Awareness Month.)

It isn’t just in honor of Trebek, but also in memory of a Jeopardy! contestant who passed away: Larry Martin, the 2018 Teachers Tournament winner, who passed away shortly after due to pancreatic cancer.

As champion, he would’ve qualified for the Tournament of Champions this year, so they gave him a special memorial on the show this week.

It’s sad, but if there’s a silver lining, it’s the hope that Jeopardy! will increase awareness about pancreatic cancer, both encouraging people to give to causes and to stay aware of their health.

Pancreatic cancer often goes undetected until it is too far progressed, and Alex Trebek recently made a PSA encouraging people to know the signs and symptoms of the disease.

Through his generous donation, Avi is doing a big part to help that cause.

“Our goal with this campaign is to support research into pancreatic cancer awareness and early detection,” Avi said. “And we hope you’ll join us in contributing.”

“What a remarkable young man and what a great gesture” Dr. Brian Druker, director of the Knight Cancer Institute, told KGW. “We hope it inspires lots and lots more people.”

Thank you to Avi for his generous support of cancer research! Hopefully this inspires others to give and spread awareness of pancreatic cancer.