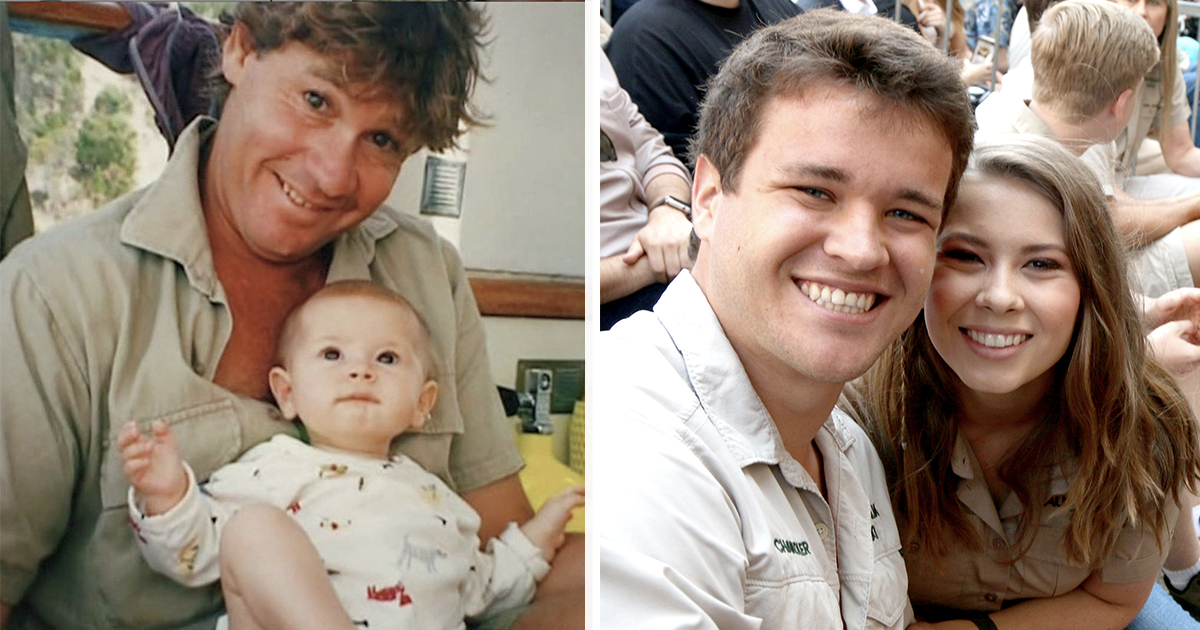 Steve Irwin, aka “The Crocodile Hunter” became an icon through his love for animals all over the world. He tragically passed away in 2006, but since then, his family have kept his legacy alive through their love of animals back in Australia.

On Steve Irwin’s television show, fans also got to see his two children, Robert and Bindi. At the time they were very young – but now they are all grown up and walking in their beloved father’s footsteps.

Last year, Bindi actually got married to the love of her life, Chandler, and now she’s become a mother. As new pictures reveal – her daughter looks so much like her, she could almost be her twin.

Here is all you need to know about Bindi Irwin!

When thinking about the name “Irwin”, there’s really just one thing that comes to mind. Steve Irwin became “The Crocodile Hunter” to the entire world through his many documentaries. Outside the spotlight, meanwhile, he strove for animal awareness and conservation.

His home for many years was the Queensland Reptile and Fauna Park, later was renamed Australia Zoo. Not only did Steve and his wife Terri pretty much spent all their time there, but they raised two lovely children, Bindi and Robert, who became just as big animal lovers as their father was.

Then, in 2006, tragedy struck. Steve Irwin was pierced through the chest by a stingray while filming at the Great Barrier Reef, Australia. It punctured his chest dozens of times, causing massive injuries to his heart.

“He was having trouble breathing. Even if we’d been able to get him into an emergency ward at that moment we probably wouldn’t have been able to save him, because the damage to his heart was massive,” Justin Lyon, an underwater cameraman and Steve’s close friend told Australia’s Network Ten television.

“As we’re motoring back I’m screaming at one of the other crew in the boat to put their hand over the wound and we’re saying to him things like, ‘Think of your kids, Steve, hang on, hang on, hang on.’ He just sort of calmly looked up at me and said, ‘I’m dying.’ And that was the last thing he said.”

Steve Irwin passed away, age 44, leaving behind wife Terri and children Robert and Bindi. People who haven’t gone through a similar thing can’t explain or imagine the sorrow and shock his family must’ve gone through. One thing was clear, though: The Irwins were going to keep Steve’s legacy alive.

Still to this day, they are doing just that.

Terri, Robert and Bindi Irwin are still highly passionate about animal awareness and conservation at Australia Zoo. Now, the family has just become larger, as Bindi and her husband Chandler welcomed a lovely daughter.

One might imagine that Bindi has lived a very unique life considering her family business. But in fact, she’s tried her best to lead a normal one.

This is all you need to know about Bindi Irwin!

Bindi Irwin was born July 24, 1998. When she was only weeks old, Bindi – who was named after Steve Irwin’s favorite crocodile – made her first appearance on her father’s television show.

Growing up, Bindi’s home was the Australia Zoo. Living around crocodiles and other exotic animals doesn’t quite seem like a regular childhood, but it appears to have been a very happy time for Bindi.

Of course, things took a turn for the worse when her father tragically passed away. At the time, Bindi was only 8 years old.

Needless to say, it was a huge tragedy for the entire family. But at the same time, as people who’ve dedicated their entire lives to the animals, his family knew the show had to go on.

Both children, Robert and Bindi Irwin, where homeschooled. Living at a zoo presented a very different kind of childhood, and since their parents were living a hectic, but simple, life in the spotlight, they were often on the move.

“Every day is different because, obviously, we live at a zoo,” Robert Irwin told Perth Now in 2013, as quoted by Yahoo, of the experience of being homeschooled. “We’re the luckiest people in the world.

“We have two teachers, one for Bindi and one for me,” he added. “When we’re travelling we have one who teaches both of us.”

Bindi and her brother Robert continued on their father’s mission to aid animal conservation and awareness at the Australia Zoo, alongside their mother. By 2013, Bindi had become old and wise enough to help conduct the tours – and it would change her life forever.

Meeting the love of her life

It was during one such regular tour that she met a person named Chandler Powell. He was a professional wakeboarder who was in Australia for a competition and had decided to visit the Australia Zoo.

Just as Terri had been when she met Steve for the first time, Chandler was only at the zoo as a regular tourist.

He spotted Bindi – and knew that something special was in the offing.

“[Bindi and I met] right next to where Steve and Terri met [after] Steve had just finished a croc demonstration,” he explained. “I met Bindi right next door, and I was holding a koala and Bindi was holding an echidna, and it was just love at first sight.”

There was something special in the air from the beginning. However, the two didn’t start dating straight away. Initially, Chandler decided to reach out to Bindi’s mother, Terri.

Speaking on Entertainment tonight, Bindi recalled what happened before the two started dating in a long-distance relationship.

“He sent a letter asking my mom if he could stay in contact with me, and then Mom gave the letter to me and said, ‘Is this person real?'” she recalled.

The fact that Bindi and Chandler met the same way as Terri and Steve did sure is wonderful. For Chandler, it was very special as well.

Chandler and Bindi soon fell deeply in love and in 2016, Chandler accompanied her to her school prom.

On her 21st birthday, Chandler proposed to Bindi. Through her Twitter account, the conservationist shared the wonderful news, alongside photos of the two lovebirds.

“On my birthday I said ‘yes’ & ‘forever’ to the love of my life. Chandler, close to 6 years ago I fell in love with you & every day since has been a whirlwind of adventure & true happiness. Here’s to a lifetime of friendship, purpose & unconditional love,” Bindi wrote.

In March last year, the couple tied the knot in an intimate ceremony with no guests.

Bindi Irwin decided not to change her last name. Why? Well, partly because of her late father, Steve.

“I’ve kept Bindi Irwin,” she told Entertainment Tonight. “I think that for me personally, after dad passed away, it was really important for me to feel close to him, and having his last name means so much to me.”

As for Chandler, he understood his wife’s decision fully. In fact, it looks like he’s the one who will be changing his surname.

“Chandler has become an Irwin now,” he added. “It has become a part of me. Everyone has their own ideas, but the nice thing is that it’s 2020 now. Anything works!”

The day before the wedding, Bindi posted an old photograph of her and her beloved father alongside a wonderful tribute.

“Thank you for being my guiding light. You’re always with me,” the caption read.

At the same time as Bindi continues to work at her childhood home, the Australia Zoo, the family bond between the Irwins seems to grow stronger and stronger by the day.

Bindi has walked in her father’s footsteps regarding television as well, hosting the show Bindi the Jungle Girl. She’s also starred in the Animal Planet special Crikey! It’s the Irwins: Life in Lockdown.

The Irwin family have been through so many tough times together. But recently, they had the joy of welcoming a new family member to the world.

Four months after her wedding, Bindi announced that she and Chandler were expecting a baby girl. However, even though the family was over the moon with the announcement, there was also an element of sorrow to navigate.

In the Discovery special Crikey! It’s A Baby, Bindi grew very emotional when speaking about the fact that she won’t get to share the wonderful moments of being a mother with her father.

“It’s hard knowing that she’ll never get to actually meet him and it’s devastating because I’ll never get to watch their connection. But, I can not wait to be able to tell beautiful Grace all of these stories about dad, to be able to share with her what an amazing father he was,” a tearful Bindi said.

“He would have loved her so much”

Bindi continued: “It is really hard. It’s hard that he’s not here because out of everyone in the world, gosh, he would have loved her the most.”

“He would have loved her so much. But I think in a way he is still with us. And his heart and soul lives on in all of us and, so yeah, he’s never really gone.”

On March 25, Bindi and Chandler welcomed their little girl, Grace, to the world. The little girl has been getting used to the surroundings at Australia Zoo – she appears to be a regular at the Crocoseum already!

When Grace was born, her proud mother shared two separate pictures, one of Grace and one of herself when she was newborn. And looking at the two pictures beside each other, it really looks like Bindi and Grace could’ve been twins!

Her mother Terri, responded: “You were the sweetest baby, Bindi, and now you’re the most wonderful mama to dear little Grace!”

Grace has a wonderful family to surround her with love. One family member who is missing, of course, is Steve Irwin.

Before Grace was born, Bindi spoke about the fact that her father would have been a great grandpa.

“I don’t think we would’ve ever seen our daughter. He would’ve just whisked her away into the zoo and it would’ve been perfect,” she told Entertainment Online.

“But it is so nice that we’ll be able to introduce her to her grandfather through all of the documentaries. It’s really special.”

“He’d be over the moon,” grandma Terri Irwin added.

“I will say one thing for sure is you would never have to wonder what he would’ve worn during any of the milestones. He would’ve worn khaki to the wedding, khaki to everything.”

We are so happy for Bindi, Chandler and the entire Irwin family, and wish the all the best in the future! The one thing we can hope is that her father and now newly-made grandpa, Steve Irwin, is up in heaven, smiling down.

Please, share this article with friends and family to honor the Irwin family for their wonderful work in helping animals to have a better life!