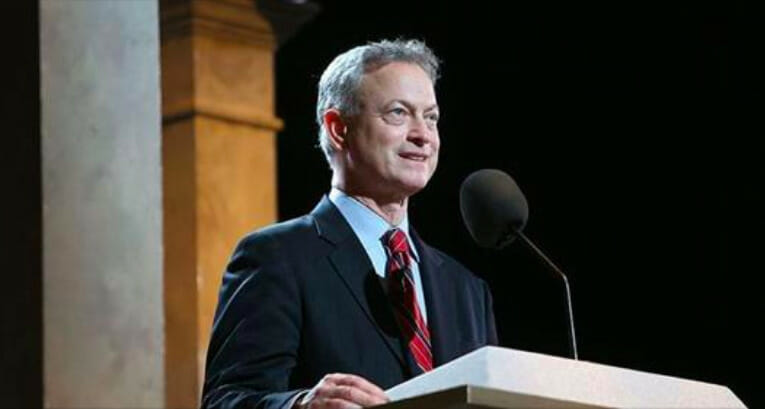 Celebrities are often in the spotlight — but not always for the right reasons. While scandals often make top news, the more positive gestures they take may not always be as highlighted.

That’s why I felt this story about Gary Sinise was particularly important to share.

The actor, probably best known for his role as Lieutenant Dan Taylor in famed movie Forrest Gump, has been doing something absolutely wonderful for years — but this has appeared to pass under the radar.

Talented actor Gary Sinise, known for roles in Truman, Apollo 13, and, most recently, Captain America: The Winter Soldier, has earned himself an Emmy and Golden Globe Award.

But there’s one thing he may be less famous for: his stunning acts of compassion towards US veterans.

Since 2001, Sinise has been helping thousands of veterans rebuild their lives after traumatic experiences at war through his Gary Sinise Foundation.

Join me in sharing #AllOurThanks in honor of our nation’s first responders who put it all on the line. Verizon will…

“After the tragic events of September 11, 2001, I began devoting much of my time supporting the men and women who were deployed in response to those attacks – the brave service members who, each day, protect and defend our great country,” the actor writes on his foundation’s official website, adding:

“Having veterans in my own family, and having been involved with supporting our military veterans going back to the ’70s, ’80s, and ’90s, it was after that terrible day I decided to become much more active for our defenders however and wherever I could.”

Honored to visit and speak at a fundraiser for the Wreaths for Veterans program at the Central Texas State Veterans Cemetery today in Killeen, TX. Thank you to all for coming out to support.

Sinise explains what inspired him to act.

“A few years after 9/11, I visited local NY firehouses, befriended many firefighters, and have supported the FDNY through numerous efforts, including raising funds to build The Brooklyn Wall of Remembrance, in honor of all 416 first responders lost on that terrible morning.

Through the Disabled American Veterans organization, I found it my mission to do all I could to support our wounded heroes and their families. And by getting involved with many other veterans Initiatives, I began to support the children of the fallen, Gold and Blue Star Families, and wherever I could serve and honor a need within the military, veteran, and first responder communities.”

“Over the years, I have met many dedicated people who are also actively working to do the same, and I have tried to do what I can to support their efforts as well as spearhead many projects on my own in support of those who are currently serving, have served, our first responders, and the families who serve alongside them.

I’ve traveled to visit our troops  around the world, and have also performed with my band (Gary Sinise and the Lt. Dan Band) in Kuwait, Afghanistan, Belgium, the Netherlands, Germany, Italy, United Kingdom, Japan, Okinawa, Korea, Singapore, Diego Garcia, Guantanamo Bay, Alaska and throughout the US in an effort to help boost the morale of our troops and military families. Through my travels, I’ve seen firsthand our service member’s extraordinary dedication.”

It was such an honor to serve food to our military men & women at Port Hueneme. The Foundation’s Serving Heroes Program is supported by the American people and serves as a reminder to our defenders that we do not forget their sacrifice and that there are grateful American’s who appreciate their service. We salute you! (VIDEO LINK IN BIO)

“My personal mission is what led to the founding of the Gary Sinise Foundation in 2011, and with the help of supporters like you, we will continue to expand this mission in support of our nation’s defenders, veterans, first responders, and their loved ones, while upholding the importance of keeping our country strong by taking care of those who serve.

While our programs and projects have certainly made a difference in many lives, there’s much more work to be done. On behalf of all of us here at the Gary Sinise Foundation, thank you.”

Our newest program, Snowball Express, serves the children of our fallen military heroes, surviving spouses, and Gold Star families. An important aspect of this program is its annual 4-day experience in December, where we bring families together from all around the nation. I am thrilled and honored to announce that this coming December we will be bringing the children of our fallen military heroes to the happiest place on Earth, Walt Disney World® Resort in Florida. Our Gold Star families will participate in fun activities and entertainment to keep spirits high and the Gary Sinise Foundation's Snowball Express program will continue to provide emotional healing for these deserving children during the Holiday season. (Learn more, Link in Bio)

Sinise has most recently collaborated with Snowball Express, an organization focused on healing and helping the children of our nation’s fallen heroes. Through their partnership, they teamed up with American Airlines to send several hundred kids to Disneyland in 2006.

They partnered again On December 8, 2018 and flew over 1,000 children and their surviving parents to Disney World. “Have fun kids! We love you!” Sinise tweeted.

Over 1000 Gold Star Children travel with surviving parent or guardian, 1,722 in all, via @americanair to Disney World today as part of our @garysinisefoundation Snowball Express program. This charter left Los Angeles this morning and I got to take this photo with them before they left. I’ll join up in a few days. Have fun kids! We love you!

Such an honor to hand over the iPad to a new custom smart home to one of our nations wounded heroes, U.S. Army Cpl. Alan Babin. God bless you Babin family. Hope to visit you all again soon. ??

Sinise’s Foundation also served over 40,500 meals to our heroes across the nation and held 27 concerts for them and their loved ones.

Sinise also works with The Gold Star Family organization, founded in January 2005 by individuals who lost family members in the Iraq War, helping families heal after losing a loved one.

Take a look at this new video as I get a private tour of a brand new home built through GSF's R.I.S.E. program. On behalf of everyone at the Gary Sinise Foundation, thank you U.S. Marine Cpl. Garret Jones for serving our country. It was an honor to visit you and your family. (Video Link in Bio)

What a champ! Please share with your family and friends if you agree that Gary Sinise’s wonderful altruism deserves more recognition.