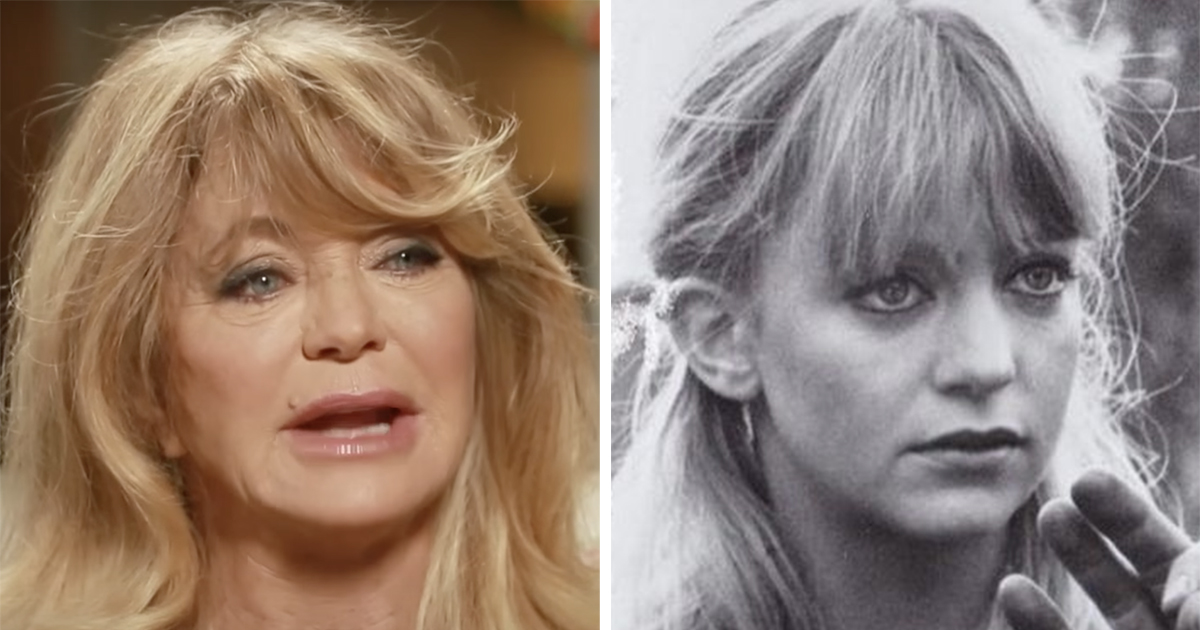 Goldie Hawn has lived virtually her entire life in the spotlight. Having started out as a dancer, she went on to become an actress. Then, following her appearance on Good Morning, World in the 1960s, Hawn reached new levels of fame.

The award-winning performer has given the world many memorable moments throughout her life. Still to this day, she does her bit to help others through charities.

But the life of a superstar might sometimes not be what it looks like from the outside. In fact, Goldie Hawn had a very tough period just as her career was taking off, at age 21. Now, she’s finally spoken out on her depression – and how it could’ve broken her in two.

Goldie Hawn was destined to work as an entertainer right from the very start. The Academy Award-winning actress started her journey towards a life in the industry at age 3, and now, at 75, she can look back at a life filled with laughs, great performances in films, and a long and healthy relationship with the love of her life, Kurt Russell.

Being a celebrity is oftentimes seen as a very fun profession. You get to do all these cool films and stunts, and make a great amount of money while doing it. You also get to attend no end of glamorous events and award ceremonies, as well as being recognized wherever you go.

Goldie Hawn – a life in showbiz

But being a celebrity also entails putting a great deal of pressure on yourself. People assume that you are always the happy and ‘perfect’ person they see on screen. Realistically speaking, we all have bad days.

The pressure of performing and always being available for fans and press can take its toll on anyone, and for Hawn, this was the case.

Mental health problems have become an increasingly significant issue in Hollywood. These days, people are speaking out on it because of the stigma it previously had.

Now, Goldie Hawn’s decided to talk openly about the subject as well. When her career took off at the age of 21, one would have assumed she was the happiest person in the world.

But in truth, she struggled with depression – and didn’t even go out in public.

Goldie Hawn was born November 21, 1945, in Washington DC. She was raised in Takoma Park, Maryland by her mother Laura Hawn and father Rut.

By age 3, Goldie started her journey towards a career in entertainment. Her mother had a dance school, and Hawn started taking ballet and tap dancing lessons. At the age of 10, she performed in the Ballett Russe de Monte Carlo production of The Nutcracker – 19 years later, she actually ran and instructed at a ballet school herself.

By this point, Goldie had dropped out of college, where she majored in drama. She started working as a professional dancer, but before long, her career would make a turn towards the big screen.

In 1968, Hawn made her feature film debut as a dancer in the Disney film The One and Only, Genuine, Original Family Band. This is also where she met her future partner Kurt Russell for the first time. There’s was to be a love story like no other.

The year before, Hawn had gotten her big television break via the lead role in the sitcom Good Morning, World. She became famous overnight, and that opened up paths towards Hollywood stardom.

But at the same time as Goldie Hawn was becoming a big television – and future movie – star, she was also battling her inner demons. This led her to a very dark place, and she even fell into depression.

Speaks out on her depression

At the same time as many dream about becoming a celebrity, that wasn’t really the case for Hawn. She had gotten her big breakthrough, but instead of wanting more, she just wanted to get away from everything and everyone.

“This is something that, for me, I worked through,” she added. “I went to a doctor, I went to a psychologist, I learned about quieting my mind and what happens to the brain.”

As Goldie Hawn’s career continued and she became more and more famous, she also devoted more and more time towards helping others.

For years, Hawn has helped others try and understand the importance of a good mental health and how one might improve it. She’s especially focused on children through her mental health organization MindUp.

MindUp provides material for both teachers and families to help children understand how they really feel. During the COVID-19 pandemic, Hawn says this has been very important.

“When this pandemic happened, it gobsmacked everyone,” Hawn said on Good Morning Britain. “We didn’t know how to handle our children, we were dealing with ourselves. It’s just a plethora of problems.”

Furthermore, Hawn urged children, teachers and families to get help if they see warning signs of mental health struggles in those around them.

“For every one of us, we may have a different reason why we may feel low, or anxious, or depressed,” she said. “All I want to say is that if you really aren’t happy, we do need to be able to tend to ourselves, to go to a doctor. Don’t be embarrassed.”

These days, Goldie Hawn enjoys a quieter life. She still appears in films and other productions, but family is the most important thing. Through the years, she’s got to welcome children and grandchildren, who she loves spending time with.

Goldie met her partner Kurt Russell in the 1960s. Since then, the couple have embarked on a wonderful journey of love together.

They’ve been superstars on the big screen for a long time, but have been abl to simultaneously share a loving relationship and ensure great devotion to their family.

“I was 21 and he was 16,” Hawn said of their first meeting. “I thought he was adorable, but he was much too young. Then, years later we met up again, and I remembered that I liked him very much when I first met him. We both said we would never go out with another actor so it just shows you never can tell.”

However, they weren’t ready to start dating quite yet.

At the time, Goldie had two children from her marriage with Bill Hudson. Her son Oliver was born Sep 7, 1976, while daughter Kate was born April 19, 1979.

While filming Swing Shift, Kurt and Goldie went out together one night after work. He took her to The Playboy Club, where they spent hours and hours talking.

The police later arrived to end what had been an iconic first date. Following that, nothing could split the two lovebirds.

Goldie’s children Oliver and Kate Hudson went on to work in movies themselves. Oliver’s known for his role in the comedy series Rules of Engagement, though it’s his sister who is the real movie star.

Even though Goldie’s children are well-known, busy actors, they have dinner together quite often, since Kate lives just down the street from her mother.

When Goldie turned 60, Kurt Russell took the entire family to Tahiti so they could enjoy a lovely vacation together.

“It’s always so much fun when we all meet up. We are very, very close and see each other as often as we can”, Goldie told the site Now To Love.

Kurt and Goldie have had great careers in show business and are still acting in movies. They usually don’t watch the films they’ve starred in, but made an exception once.

In 1987, they starred in the movie Overboard, and later watched it together to remind themselves of their beautiful relationship.

“You know how sometimes you forget why you fell in love? I remembered everything, and why I fell in love. It was really something to be able to watch that,” Goldie told James Corden in 2017.

Why they haven’t tied knot

They got six grandchildren, and through Instagram, they have been seen giving their love to the smallest members of their family.

The movie stars were captured on camera by daughter Kate holding their new granddaughter in a very special moment a couple of years ago.

During the COVID-19 pandemic, Goldie and Kurt have been quarantining together. Even though she’s a great entertainer, the long days without being able to do anything special have been tough.

“We’re very, very lucky and I’m incredibly grateful, but what I do feel is a tremendous angst, a tremendous sadness,” Goldie revealed in an interview with Good Morning Britain..

Even though Goldie had a very tough period of depression, she’s now doing her best to help others with mental health struggles. That is something we truly love her for!