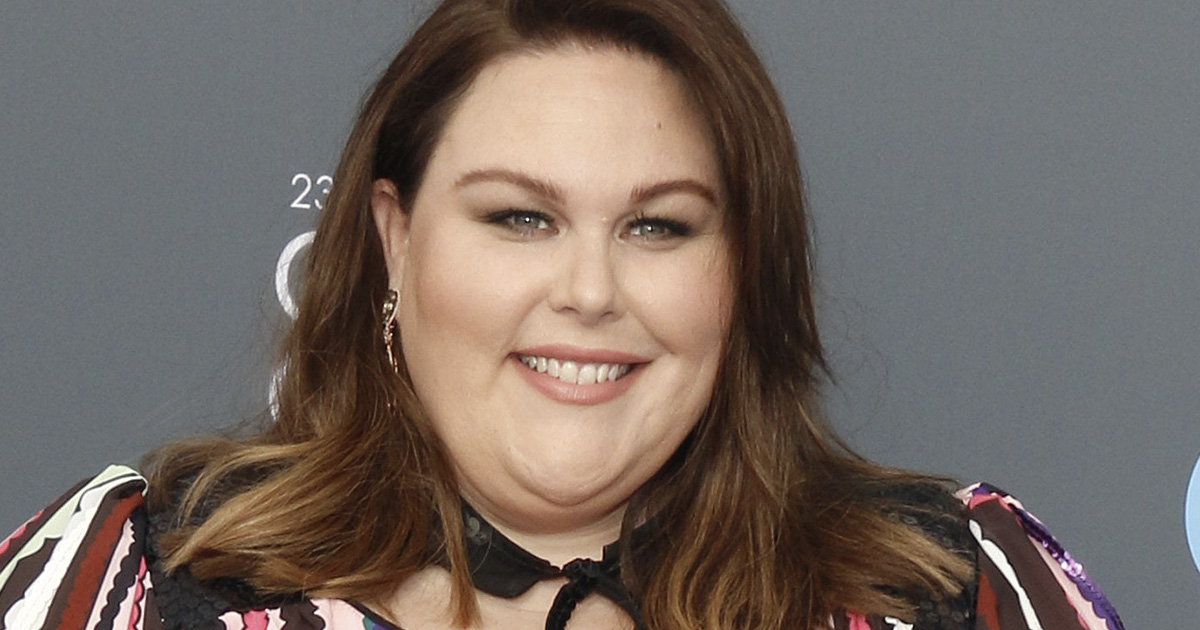 Chrissy Metz has been breaking barriers for as long as she’s been a celebrity. These days, she’s transformed herself into a great role model for women struggling with weight and body-image issues.

Her journey has been long and not always easy, but, at the same time, very inspirational. In her biography, she revealed the story of her long path to the Hollywood spotlight.

One could argue that a privileged childhood will give you an advantage later in life. Perhaps you’ll have an easier time getting into your college or university choice, or maybe you’ll be able to land your dream job without a sweat.

On the other hand, not having a privileged childhood could lead to you being even more appreciative and focused on the goal of creating a better life for yourself, something that a privileged person might take for granted.

Well, it’s safe to say famous actress Chrissy Metz didn’t have the childhood of dreams, with her mother struggling to put food on the table. At the same time, Chrissy struggled with her weight, but that wouldn’t stop her from reaching for the stars.

Today, the 40-year-old Florida native is a role model for women all over the world. She talks often and loudly about body-weight issues, and we all love her for it!

Chrissy Metz was born on September 29, 1980, in Homestead, Florida. As a baby aged just four months, her family moved to Japan, where her father was stationed as a naval officer.

When she was eight years old, Chrissy and her family moved back to the US. Her parents had divorced and she says that she never really got to know her father. Instead, Chrissy, along with her older sister and brother, were raised by their mom alone. And it wasn’t easy.

“There were times I’d be nervous walking home from elementary school, thinking, If that red tag from the power company saying our lights are turned off is on the door handle, I don’t know what I’ll do,” Chrissy Metz told Glamour.

“And there were nights my mom wouldn’t eat dinner. She’d be like, ‘Oh, I’m not hungry.’ I knew she was giving up food to make sure we could eat, but when you’re 9 or 10 years old, you can’t help. It was devastating.”

Food equalled love in Chrissy Metz’s family, according to the woman herself. Her grandmother usually made her a grilled cheese sandwich every time she picked her up from school. As Chrissy got older, she used food as something to celebrate with when she was happy, or to commiserate her sadness.

By age 11, Chrissy went to Weight Watchers for the first time.

“I was the youngest person in the damned room, and it was awkward. My mom was trying to figure it out, but it’s a process,” she recalled in an interview with The Hollywood Reporter.

Her mother continued to raise three children on her own, until she met a new man. Chrissy got a stepdad, but their relationship was – just like the one with her biological father – complicated.

In her memoir, This Is Me: Loving the Person You Are Today, released in 2018, Chrissy Metz writes that her stepfather seemed offended by her body, staring at her when she ate and joking about putting a lock on the refrigerator.

“We had lived with a lack of food for so long that when it was there, I felt like I had to eat it before it disappeared. Food was my only happiness,” she writes.

She found herself getting up in the middle of the night to eat in the bathroom. When she turned 14, she claims that her stepfather made her weigh-in by force.

“He’d get the scale from the bathroom and clang it hard on the kitchen floor. ‘Well, get on the damn thing!'” Chrissy Metz writes in her memoir.

“He sat in a chair next to the scale as I got on. ‘Good God almighty!’ he yelled every single time. The number then was about 140 or 130. Most of my friends weighed about ninety pounds. ‘Why are you getting fatter?’ he demanded. I look at pictures of me from that time, and I would be so fine with being that size now. But I thought I was gigantic.”

Entertainment Tonight spoke with her stepfather regarding her claims, and he denied it ever happening.

“None of it’s true,” he says. “I love her very much just like I always have and I treat her just like she’s one of mine. I want the best for her.”

Following everything that happened, Metz still has mixed feelings about her stepfather. Today however, they are in a good place.

“We have a relationship now,” she writes. “I do love him and I do care about him.”

After Chrissy Metz graduated high school, she became interested in acting. She had also developed a wonderful singing voice, which would help her to land a job a few years later on.

Following her studies at college, Chrissy went to a talent search event in Gainesville, Florida together with her sister. At the time, she was working as a pre-school teacher, but decided to sing at the event. Her choice? Beautiful, by Christina Aguilera.

One of the talent agents really liked her, and suggested that Chrissy move to Los Angeles, where it would be easier to get work.

Her manager recommended she lose weight before heading out to Los Angeles. She was a size 12 when she first started acting, and dropped 50 pounds before moving out west, she said.

At this time, Chrissy was 22, and would soon find herself in the middle of the heart of show business, Hollywood. Chrissy wanted to work full time as an actress, but getting work wasn’t easy. At the same time as she auditioned for roles, she worked as her agent’s assistant.

The following years were tough for Chrissy. She got small parts in TV series like Entourage and movies such as Loveless in Los Angeles (2007) and The Onion Movie (2008).

Before turning 30, Metz didn’t know which direction her career was going in. Then, in 2010, just hours before she was due to celebrate her 30th birthday with a big party, she suffered what she thought was a heart attack. Chrissy rushed to the hospital, but doctors decided that she’d simply had a panic attack.

At the same time, though, the doctors issued a warning to her about her weight. It changed everything. Due to her lack of work and feelings of insecurity, she had gained more than 100 pounds.

“You can’t continue on this path,” Metz recalled the doctors saying.

Fortunately, the frightening incident triggered an epiphany. “I’m like, ‘Oh, this is not just a physical thing,” she said. “It’s like a soul/spirit/mind/body collective thing. Not everything’s connecting,'”

Chrissy decided that this had to be a turning point. She started working with herself, both mentally and physically, and made the choice that no one was ever going to bring down her sense of self-worth again.

In just five months, she lost more than 100 pounds.

Chrissy also went to therapy and learnt a lot about herself. Four years following her panic attack, in 2014, she would finally get her big break in show business.

Chrissy landed the role as the recurring character Ima Wiggles, a “fat lady”, in the fourth season of American Horror Story, working side by side with actors like Jessica Lange and Sarah Paulson.

Following her work in American Horror Story, she decided to audition for the role of Kate Pearson on the emotional drama TV series This Is Us. She really wanted the part, which was partly based on creator and executive producer Dan Fogelman’s own sister’s weight-loss journey.

“Here was this woman who was actually dealing with weight. Not like, ‘Oh my God, I gained a pound,'” Chrissy Metz explained.

“She was a real woman who was really struggling, and all I could think was, ‘Oh my God, I’m Kate.'”

Yet following the audition, she thought she had blown it, and so packed her bags to move back to the East Coast. However, hours later, Dan Fogelman himself called and told her that she got the part.

Chrissy Metz – This Is Us

At the time, Chrissy only had 82 cents in her bank account. Her first thought when the telephone rang was that it was a bill collector calling.

“I kept auditioning, with no savings and no money, credit card debt gaining interest,” she told Today in 2017.

“I went on unemployment. I bought ramen noodles at dollar stores. I never had to — God forbid — live on the streets; I moved in with a roommate who told me, ‘Stay with me until you can afford rent. Don’t give up.’ People who supported me were like, ‘If you don’t have money for food, I’ll cook you dinner. You don’t have money for acting class? Let’s get together and read lines.'”

Chrissy Metz played Kate Pearson on This Is Us for 74 episodes. She received two Golden Globes – in 2017 and 2018 – in the Best Performance by an Actress in a Supporting Role in a Series category. In addition, she was also nominated for an Emmy for Outstanding Supporting Actress in a Drama Series in 2017.

Chrissy has worked on several productions over the last couple of years, starring in Sierra Burgess Is a Loser (2018) and in the faith-based Breakthrough (2019), among others.

Through her charisma and self-love, she has also become an important role-model for women all around the world. She describes herself as a “plus-size” woman, and has proven that you can make a career in the entertainment business even if you are deemed plus-sized.

She might not have set out to be an icon for women that look like her, but she is more than comfortable being one.

“I’ve had women — average women, older women, teenagers —  who say to me, ‘Your role and this show has changed my life’,” Metz says.

“That makes all the struggle, all the ramen noodles, all the times when I couldn’t pay my bills, all the times where I was like, ‘I can’t do this,’ worth it. Sometimes I cry on the way to the set still. There is something that happens when you are grateful: You continue to keep receiving blessings. So I will always be grateful.”

In October, the two went official, posting pictures of each other on Instagram – and they look so cute together!

Chrissy posted a lovely photo of them in October for her 1.5 million followers to see.

“Bradley, from the first moment I laid eyes on you I wanted and needed to know you. Now I feel so lucky to love you,” she wrote. “Thank you for being the absolute wonder that you are, I love you.”

Chrissy Metz is a fantastic role model for so many – both men and women. We can’t wait to see what’s coming next in her career.