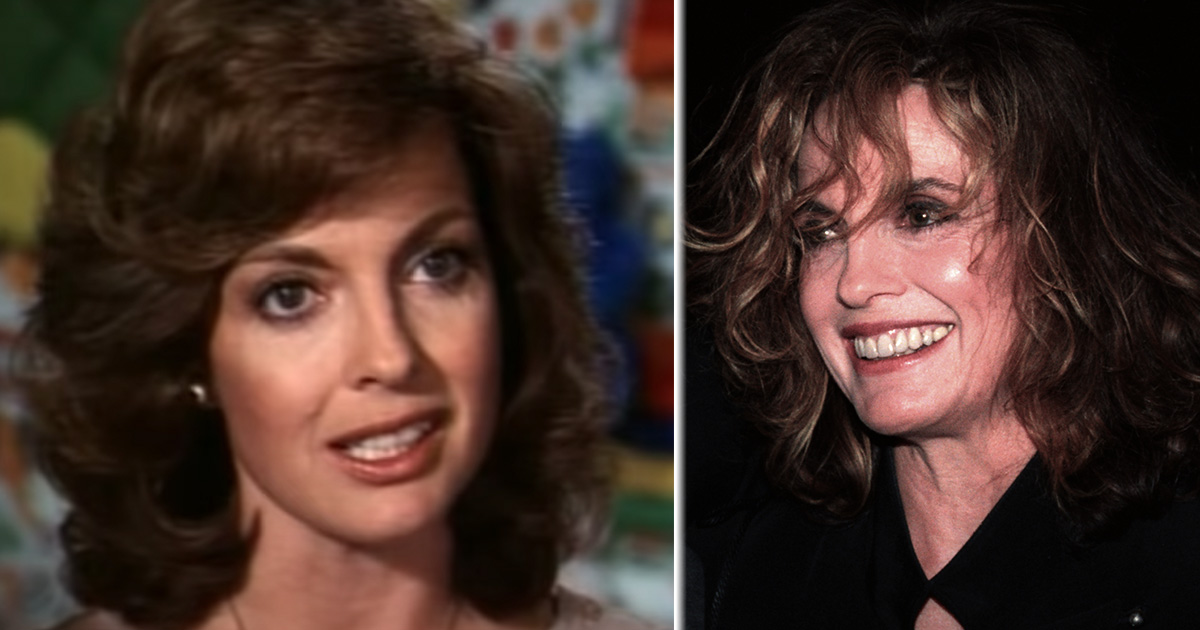 Linda Gray became a household name through her portrayal of Sue Ellen Ewing on hit soap Dallas. She stayed on the show for more than 300 episodes, but as much as she enjoyed a successful career, Gray also struggled with many things on a personal level.

This is the story of Linda Gray, who’s still going strong today, at 80 years of age.

Throughout the history of television and film, we’ve seen actors and actresses deliver amazing performances any number of times. I don’t know about you, but in those truly stellar performances, it feels like the actors themselves were pretty much made for the parts, and that no one else could play them to the same degree.

For example, could you even imagine Little House on the Prairie‘s frontman Charles Ingalls being played by anyone other than Michael Landon? Or would Mary Poppins have been as good if someone other than Dick Van Dyke starred as Bert?

There are so many examples of exactly these kinds of parts, but let’s talk about one more. Personally, I can’t even imagine watching the iconic hit television series Dallas without Linda Gray starring as Sue Ellen Ewing. I speak for many when I say we are grateful that she got the part.

Linda Gray’s life has been very special; one could go so far as to describe it as a roller coaster. Gray has battled life-threatening illness, addiction and also struggled through a less-than-satisfying marriage.

However, though she’s certainly been through tough times, she’s always come out the other side stronger, determined to make the most out of her life and have a long and successful career.

On Dallas, Gray starred alongside Larry Hagman and Patrick Duffy. Now, she reveals her feelings about acting alongside Hagman, and the secrets behind their great chemistry on set.

As a young child, Gray faced a big challenge when she was diagnosed with polio.

Her grandfather had already been diagnosed with the virus, and her parents were left devastated. For Linda herself, though, it wasn’t a big deal.

“They didn’t know what it was when he was 17, and he was always in a wheelchair,” she recalled. “When I was diagnosed, everyone went crazy in my family, but I wasn’t. I thought I could have a wheelchair like Grandpa.”

Gray grew up in Culver City, California, where her father had a watchmaker shop. As a young child, performing was in her blood. She performed on the streets of her neighborhood. When attending Notre Dame Academy in Los Angeles, Linda starred as Cinderella in the production of Cinderella.

Her father provided the stability she and her sister Betty needed.

“He didn’t offer emotional support though,” Linda Gray wrote in her 2015 book The Road to Happiness Is Always Under Construction. “He was just kind of there, like a piece of furniture, but then this was a different time.

“You didn’t go to Dad with boyfriend problems. God forbid. But he was supportive of my career.”

Their mother, Marge, a former artist and ballerina, was the opposite.

Marge was a heavy drinker and before long the two young sisters had to take control of their home.

“She wasn’t falling down drunk, there was never any yelling,” Linda wrote. “She wasn’t mean – she was just blurred, in her own world, she would forget to buy food so I started doing the cooking. My sister and I didn’t like her.”

Later on in life, Marge eventually went to Alcoholics Anonymous and stopped drinking. Linda believes that her mother’s drinking habits were a result of disappointment and suppressed creativity. She became determined to avoid a similar fate to her mother.

“I felt that if I didn’t pursue my career the same thing could happen to me,” Linda Gray explained.

But through her path of life, she’d face several challenges. And the hurdles started coming as early as her 20s.

Growing up in Culver City meant being very close to the show business capital of the world, Hollywood. Along with her friends, Linda Gray used to hang around the different studios after school, getting autographs from stars such as Tyrone Powers and Spencer Tracy.

At a young age, Gray wanted to study medicine. But growing up close to the film studios, she changed her focus, and soon knew she wanted to become an actress. In her teens, Gray worked as a model for several beauty companies and airlines.

Linda Gray was only 21 years of age when she got married to photographer Edward Lee Thrasher. However, the marriage turned into somewhat of a nightmare for Linda.

Her career and pursuit of work in show business was put on hold. Instead, she took on the role of wife and then mother. In 1960, the couple welcomed a son, Jeff Thrasher, and six years later, daughter Kehly was born.

Ed, Linda says, didn’t really say much. The family moved to Santa Clarita, where she still lives today, but Linda was determined to make her own career.

Their marriage was, according to Linda, emotionally cold. She felt abandoned.

“It tore me apart but I just thought, ‘Well, I can make this work somehow,'” she explained. “It took me 21 years to leave my marriage,”

At the same time, her husband Ed didn’t want her to have part-time jobs; he wanted a luxurious lifestyle at home. Linda decided that it was a chance for her to get into the show business, and before long she was appearing in television commercials.

A lot of them.

She had two uncredited brief appearances in feature films Under the Yum Yum Tree and Palm Springs Weekend in 1963.

A couple of years later, Linda Gray got a gig which today is pretty much legendary. Age 27, she was paid $25 to be Anne Bancroft’s body double in the poster for the film The Graduate (1967), starring a young Dustin Hoffman. Gray’s legs appears in the iconic image, and funnily enough, she actually ended up playing Mrs Robinson in the 2001 West End State production of The Graduate.

But not everyone loved her. In her 2015 memoir, Gray added a rejection letter which she received from Glamour Magazine in the early 1960s. But it certainly didn’t bring her down.

“It was so funny that I kept that letter,” Gray said. “I kept the letter because I realized that we all have rejections, and it was her opinion when I was 20 years old. I could have had it devastate my life. But, I didn’t. This feisty streak came out – ‘Oh, yeah? I’m gonna show you!’ With great love and a lot of humor, I kept that letter. It kicked me from behind, and made me want to go and do something.”

Linda loved being a mother, but at the same time was frustrated at not being able to pursue her career. When she finally decided to take acting classes, her husband wasn’t happy.

“He said, ‘Why don’t you become an actress when the children are in college’,” she recalled.

At age 37, however, Linda Gray went her own way and took acting classes alongside many younger prospects. Actor Dennis Weaver saw Gray’s talent, and helped her get her first real acting job, starring as a guest star on the TV series Marcus Welby M.D in 1974.

It wouldn’t take long before everything then changed for the better.

In 1978, Gray got the role as Sue Ellen Ewing on the new television soap opera Dallas. At first, she was supposed to be a recurring guest role for the five-episode first series, but she soon became a regular cast member. Actually, her performances made her a star.

Dallas was all about corruption, betrayal, lies, affairs and scandals played out on the Southfork Ranch in the series. Gray’s performance was praised by television critics, and alongside acting colleagues Larry Hagman and Patrick Duffy, the series propelled her to huge success.

Gray became somewhat of a sex symbol on Dallas, and the chemistry between her and Larry Hagman was real.

Executives at CBS saw everything happening in front of their eyes, and it was pure magic. However, Gray states that the reality wasn’t build around any sexual chemistry.

“He was the bad big brother that I never had,” Gray said. “He was always doing something in my mind wrong – he was drinking too much, or whatever, and I would reprimand him, he loved that, he loved to do something just to make me crazy. I’d say ‘Don’t eat that. You don’t need that much sugar, and stop drinking.'”

“I was a pain in the neck – and he loved it,” she continued. “He would do things purposely to get me fired up. The directors were just in awe. They thought we were crazy teenagers, but when they said action, we would become J.R. and Sue Ellen. It was seamless. We don’t know what happened. It was absolute magic. We felt blessed, and we were.”

Dallas wasn’t only praised by television critics and executives in the business; the audience absolutely loved it too.

The show broke several viewing records, becoming one of the hottest things on television. Still to this day, it’s one of the longest-running shows in American prime-time television history.

On November 21, 1980, viewers got their answer as to the mystery of who shot Larry Hagman’s character, JR Ewing, and boy did people want to see it.

More than an estimated 80 million people watched the episode, making it the largest audience for a single television program ever in America at the time, according to BT. It stood at No.1 until 121 million viewers watched the last-ever episode of sitcom M*A*S*H*.

Gray was nominated for two Golden Globe Awards for Best Actress – Television Series Drama, as well as a Primetime Emmy Award for Outstanding Lead Actress in a Drama Series for her performance on Dallas.

During her succesful run on the show, Gray finally divorced her husband Ed Thrasher in 1983. Her son Jeff followed in his mother’s footsteps, becoming a director.

Jeff earned an Emmy nomination in 2018 for Outstanding Directing in a Multiple Camera Lifestyle, Culinary or Educational and Informational Program for Furze World Wonders. He was also awarded a Canadian Screen Award for Best Science or Nature Documentary Program or Series for his 2015 Mission Asteroid.

However, tragedy struck in 2020 when Jeff passed away following a reported battle with leukaemia.

On Instagram, Linda Gray posted a tribute to her late son.

“A celebration of my son Jeff’s life. He was the kindest, funniest, sweetest human being….. he brought the world such love and was loved by everyone! May his journey be a magical one,” she wrote.

Linda Gray starred in a whopping total of 308 episodes on Dallas. But what did she do following the show?

Well, she continued starring in several television series, and in 2012, she returned to the role of Sue Ellen Ewing when Dallas was renewed for two seasons. Gray was also presented with a Special Award in the 2014 USA Film Festival Award.

Today, she’s 80 years of age. But still looks as stunning as ever!

Linda Gray has been through a lot in life, all the way back to her childhood, through her first marriage, and the tragic passing of her son.

But one thing is for sure: she’s learned how to cope with negative things and turn them into the energy she needs to carrying on.

We love her for it, and wish her all the best in the future! Please share this article on Facebook with family and friends.