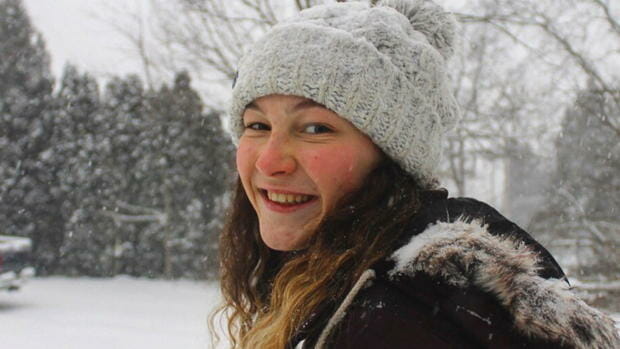 17-year-old Alexandra Valoras seemed like a model teenager. From the outside she exhibited all the signs of success, happiness and prosperity.

She was a star at school, regularly achieving the highest grades, she had an abundance of friends and was loved at home.

The teenager revealed nothing about her crippling inner-anxiety, though … except in her secret diary.

Sadly, her pleas for help would be discovered too late.

The story of Alexandra Valora’s life is, tragically, more common than one might think.

Just a few short weeks after a skiing holiday with her family, in the early hours of one cold Monday morning in March, she crept out of her room and slipped silently through the house whilst her family lay sleeping.

Alexandra then began the walk to a nearby bridge that crossed a highway in Grafton, Massachusetts.

What went through the 17-year-old’s mind on that long and lonely march, no one will ever know. Alexandra took her own life shortly after, jumping from the bridge and down onto the road.

Her parents, Alysia and Dean Valoras, weren’t immediately panicked when they found Alexandra’s bed empty on that Monday morning, March 19th. Their 17-year-old was always so responsible; there had to be a good reason.

As time ticked by, her mom decided to trace Alexandra using the GPS on her mobile.

One of the first people to get to the highway was Alexandra’s father, Dean.

“I leaned over the edge and looked down, and I saw her,” the dad told the Boston Globe.

Sister finds the diary at the bridge

“I was just hoping for heat. Do you understand what I mean? But there was no heat, there was nothing. And all the cars continued to drive. My daughter was lying at the side of the road, nobody saw. And she was cold.”

Close by the bridge, near to the spot where Alexandra had jumped, there were several items belonging to the 17-year-old. It was her younger sister, Emily, who found Alexandra’s things.

Her winter shoes. Her purple coat. Her green water bottle covered in stickers … and two volumes of her diary.

Inside were 200 pages filled with self-loathing and despair. Alexandra had written things like “You are broken”, “You are lazy”, and “You are a failure”.

“There was so much joy in everything she did, and it doesn’t match what was in that diary,” mom Alysia said.

Nobody can understand just where Alexandra’s dark thoughts came from.

“This book is my garden,” she wrote. “I don’t grow much. A lot of weeds overrun it. The soil is rocky.”

The words are such a confusing and sharp contrast to the girl her parents knew. Alexandra had several close friends, and often spoke candidly with her parents.

All in all, she seemed happy.

“It just does not seem possible, but the reality was different. Because it’s written here,” said Dean.

Teenage suicide is becoming an epidemic in the United States. As per CBS, when it comes to young women around Alexandra’s age, suicide rates are at their highest point for 40 years.

Suicide is now the most common cause of death for 15 to 24-year-old’s, both boys and girls.

Now, Alexandra’s family are desperate to talk about what happened and share a warning with others. They believe that by going public with their pain, it could have a positive impact on other teens who are struggling.

Dean and Alaysia have been involved in several major interviews, allowing their grief to be put on show for all to see in a bid to raise awareness.

“There are many other children out there like her, they are high-performing,” says Alysia Valoras.

In her last diary entry, just hours before she took her own life, Alexandra wrote: “Don’t blame yourselves for not seeing warning signs. I hid for a reason. I didn’t want you to know how deep in my own mess I was. So it wasn’t anyone’s lack of perception.”

This summer, just one day after the Boston Globe published the story of Alexandra’s tragic death, Dean and Alysia discovered a note on their doorstep.

The note read: “Your words in Alexandra’s article have really changed my life. Now I know that there are families talking to their children about their mental health.”

“It makes me feel she didn’t die in vain,” says Alysia. “She’s had such a big impact, and it feels comforting.”

Sadly, Alexandra’s case is far from unique. The suicide rate in young people is rising, and this is something we can never accept.

A single suicide is one too many. By writing about this issue and being open on the subject, families like that of Alexandra’s are working towards increased awareness on a topic that must be discussed.

Please help their cause by sharing this article, and Alexandra’s story, on Facebook. It might seem a small gesture, but every one counts!